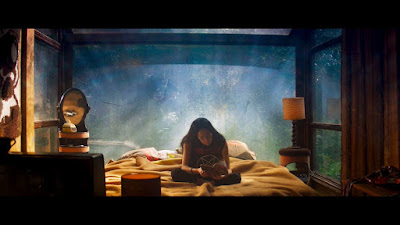 El Topo (1970), Pink Flamingos (1972), Rocky Horror Picture Show (1975), and Repo Man (1984). These iconic films are examples of “midnight movies” – cinema so outlandish and bizarre that they could only be viewed at midnight screenings, typically financial flops during their initial theatrical run only to be rediscovered later by a small but dedicated following that worships every scene, every bit of memorable dialogue. These films dealt with wild elements like drugs, rock 'n' roll, sex and violence in extreme ways so that the act of going to see them felt like a taboo smashing event in itself. The midnight movies aesthetic nearly became extinct thanks to the decline of art houses and repertory theatres and the popularity of home video and the Internet. Like the zombies in Romero’s Dead films, however, the midnight movie experience refused to die with films like Donnie Darko (2001) developing a cult following through late night screenings. Panos Cosmatos’ Mandy (2018) continues this tradition.

The film rather fittingly received its theatrical debut at midnight. It is a throwback to the midnight movie aesthetic – imagine a Frank Frazetta illustration brought to life by some kind of cinematic alchemy courtesy of Alejandro Jodorowsky if he decided to direct a biker movie. This is the cinematic equivalent of a death metal record and feels like it should be watched with a black light on. Mandy returns us to the heady times when a film was experienced as opposed to merely being watched. It comes from the mind of Panos Cosmatos, son of journeyman Hollywood director George P. Cosmatos (responsible for action fare like Rambo: First Blood Part II and Cobra). Mandy is the follow-up to his auspicious debut Beyond the Black Rainbow (2010), a hallucinatory mood piece that felt like early David Cronenberg on acid.

Cosmatos sets the tone right from the get-go with “Starless” by King Crimson playing over the opening credits while introducing Red Miller (Nicolas Cage) plying his trade as a logger. He returns home after a hard day’s work to his girlfriend Mandy Bloom (Andrea Riseborough), an artist who creates wonderfully detailed fantasy art. Cosmatos makes a simple scene like the couple talking in bed visually arresting by employing a series of constantly shifting color filters over them. The first half of the film is a love story between Red and Mandy as we hang out with them, observing the couple talking in bed and eating dinner in front of their television – things that most couples do. This gets us to care about and like them. It also shows how Red is defined by his relationship with Mandy. He works hard during the day cutting trees. He doesn’t enjoy it; he does it to support them. He is also supportive of her work as an illustrator, taking a genuine interest in her latest project.

Cosmatos’ film is permeated with a dreamy atmosphere where everyone talks slowly with pregnant pauses and utilizes long takes like something out of a David Lynch film. An ominous tone is gradually established throughout the first half of the film as there is the feeling that something horrible is going to happen. While out for a walk one day a truck emerges out of a hellish light and passes by her. One of the passengers is Jeremiah Sand (Linus Roache), leader of a hippie cult known as Children of the New Dawn. He notices and becomes immediately fixated on her. He enlists his people to kidnap Mandy and they in turn call upon the Black Skulls, a demonic biker gang from out of the woods in an unsettling scene where they are summoned with a mystical horn, emerging in the form the marauders from The Road Warrior (1981) if they mated with the Cenobites from Hellraiser (1987).

They kidnap Mandy in the middle of the night and subdue Red amidst strobing lights in a nightmarish scene. Once the cultists dose Mandy with LSD and the venom from a giant black wasp that apparently lives in mysterious thick fluid, Cosmatos cuts loose with the Giallo lighting and a trippy audio/visual assault on the senses. Sand and his people torture Red and force him to watch a gut-wrenching act that destroys his entire world. Of course, the cultists make the fatal flaw that bad guys always make in revenge movies – they let the hero live when they had the chance to kill him. Once free, Red makes it his sole mission in life to wreak unholy vengeance on Sand and his cult of Jesus freaks. From this point on Mandy becomes a full-throttle revenge picture referencing Enter the Dragon (1973) and The Texas Chainsaw Massacre 2 (1986) as Red drops acid, snorts cocaine and lights a cigarette from the flaming skull of a biker on his bloody path of revenge.

Cosmatos understands that for a revenge story to work the antagonist must do evil things that affect the protagonist in a very personal way so that the vengeance that comes later on is not only satisfying for the hero but a cathartic experience for the audience. Over the course of the film, Red undergoes a harrowing transformation from loving everyman to home-made, axe-wielding golem whose breaking point comes during an impressively acted freak out by Nicolas Cage that rivals Martin Sheen hitting rock bottom at the beginning of Apocalypse Now (1979). There is something genuine about the primal anger and sadness that Cage emotes in this powerful scene. 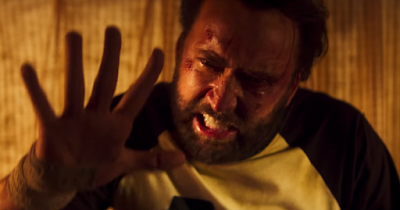 These days when you watch a Nicolas Cage movie you know what you’re going to get. Long gone are the days where he’d attack every film role that came his way with unpredictable gusto. Since his last significant studio movie and his well-publicized financial problems he’s appeared in several forgettable movies. Every so often, however, he throws audiences a curveball, appearing in notable projects like Bad Lieutenant: Port of Call New Orleans (2009) and Drive Angry (2011) that allow him to channel his inner Cage and demonstrate that the desire to cut loose has not gone away; it merely lies dormant, anticipating the opportunity to let its freak flag fly. Mandy is such a film.

The character of Mandy is tied to the earth as evident in a scene where she grieves for a dead baby animal she encounters while out for a walk in the woods. While Red suggests leaving at some point, she disagrees, finding it peaceful out in the middle of nowhere. She also recounts a story about her father killing a baby starling with a crowbar and how he gave it to other kids so they could take a turn but when it came to her time she ran away. Andrea Riseborough does an excellent job in these scenes, giving insight into Mandy’s dark past and how she feels safe and happy with Red.

Linus Roache plays Jeremiah as a charismatic figure that destroys one man’s life for his own trivial fantasies. He is a cult leader with a messiah complex, spouting pseudo philosophical religious twaddle while the women in his cult serve and service him. He surrounds himself with people willing to do his bidding and is ultimately portrayed as a pathetic figure with delusions of grandeur that will be his undoing.

Hopefully, the buzz that Mandy has generated will get Cage out of cinema purgatory and back working with top tier talent on significant material instead of garbage like 211 (2018) and The Humanity Bureau (2018). He has always been something of a wild card, following his own internal muse for better or for worse. Mandy shows that he can still deliver the goods if given the right material. Hopefully, it will also allow Cosmatos to make another film in less time it took between this and Beyond the Black Rainbow. He wisely bided his time between projects until he hooked up with backers that were willing to give him the creative freedom he wanted. It has more than paid off – the end result is a confident and assured film with a bold, distinctive visual style and many unforgettable moments that make it a prime candidate for the midnight movie hall of fame.
at October 22, 2018 2 comments:

BLOGGER'S NOTE: This post is part of the Lee Marvin Blog-A-Thon being coordinated by Richard Harland Smith at Movie Morlocks. “The cur... 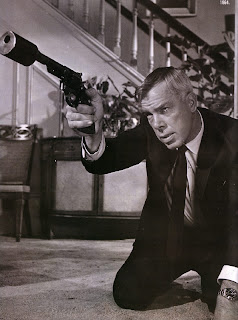