Legendary American character actor Warren Oates died on this day in 1983 from a sudden, massive heart attack in his Hollywood Hills home in . He was only 54 but had packed in a lot of hard-living and a lot of memorable performances in many films in those years. Born in July 5, 1928 in , Oates is best known for his work with Sam Peckinpah and Monte Hellman during the 1970s. He also worked with other legendary filmmakers like Norman Jewison (In the Heat of the Night), Terrence Malick (), William Friedkin (The Brink’s Job), and Steven Spielberg (1941).

Oates served in the Marines at the end of World War II as a mechanic. He moved to in 1954 and worked odd jobs in-between roles on cop dramas and westerns on television in the late 1950s and early 1960s. It was on The Rifleman that he met Peckinpah. They would develop a personal friendship and a working relationship that endured for many years. Together, they collaborated on four films, most notably The Wild Bunch (1969) and Bring Me the Head of Alfredo Garcia (1974).

Alfredo Garcia is the epitome of a grungy nihilism that was in vogue with many American filmmakers during the ‘70s. A calm, idyllic setting is quickly shattered when a pregnant young Mexican girl is tortured by her land baron father until she reveals the name of the man responsible: Alfredo Garcia. Her father decrees that anyone who brings him the head of Garcia will receive a million dollars. Two rich businessmen search every town and small village for any signs of the man. One day, they happen by a small-town bar where they catch the eye of Bennie (Oates), the bartender who likes the color of their money. 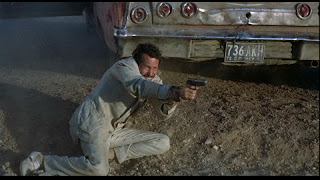 Bennie asks around and finds out that his girlfriend once had Garcia as a customer when she was a prostitute. Bennie strikes a deal with the businessmen. He has four days to bring back Garcia’s head or they will come after him. So, Bennie and his girl go on the road with two thugs in a beat-up station wagon tailing them. They travel through some of the most dirt-poor parts of that you will not find in a tourist brochure. Bennie becomes obsessed, not with the money but with Garcia and why his head is so valuable. He sees it as a ticket that will lead him to this answer.

Once they find Garcia’s body, their lives get a lot more bloody and violent as the film shifts gears into a balls-to-the-wall revenge picture. Bennie’s descent into murder-fueled madness is something to see. He starts talking to Garcia’s severed head. He looks in the mirror and sees a completely different man looking back at him then who he was when this all began.

Oates looks the part, with his cheap, white suit, gaudy shirt and loud tie, complete with large sunglasses — based on Peckinpah’s actual attire at the time. Oates always looks disheveled and world-weary — a life of hard-living. He has a natural, tough guy presence that you just don’t see anymore. He has a cool, don’t-fuck-with-me attitude. And no one can quite curse angrily as convincingly as Oates does. At one point, he tells two bikers (one played by Kris Kristofferson) who are about to rape his girlfriend, “You two guys are definitely on my shit list.” You don’t really like Benny but you grow to respect him and his obsessive desire for the truth.

In addition to Peckinpah, Oates also worked frequently with Hellman with Two-Lane Blacktop (1971) being their most popular collaboration. The film follows two young men who race other cars in their customized ’55 Chevy. We never find out their names and the credits list them simply as the Driver and the Mechanic. Early on, they cross paths with a rival driver (Oates) in a ’70 Pontiac GTO. Eventually, they meet GTO at a gas station and challenge each other to a cross-country race to for “pink slips,” the title to the loser’s car. Oates plays GTO gregarious to a fault, scaring off a hitchhiker by repeating the same stories twice and telling his life story, which changes with every new person he picks up. The characters in Two-Lane Blacktop never really connect with each other in a meaningful way. The Driver and the Mechanic only talk about their car, while GTO talks about his car and lies about his past. 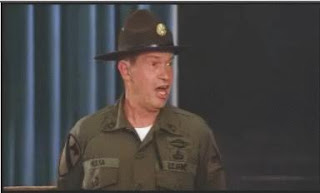 In 1981, a year before he died, Oates appeared in the Bill Murray comedy Stripes as a gruff drill instructor. After losing his job, his girlfriend, and his apartment all in one morning, John Winger decides to enlist in the Army and straighten out his life. He convinces his best friend to enlist as well. Once they arrive at the base and meet their no-nonsense drill instructor, Sergeant Hulka (the perfectly cast Warren Oates), John and Russell realize that it’s not going to be as easy as they imagined. The casting of Oates gives Stripes a dose of gravitas and provides a certain amount of tension in some of the scenes he has with Murray. Sgt. Hulka is the ideal antagonist for the anti-authoritative Winger and their scene together in the barracks’ washroom where Hulka finally asserts his authority is filled with a palpable tension — unusual for a comedy but it works. It wasn’t played for laughs and allowed Murray to do something he hadn’t done before. Here are two memorable clips from the film featuring Oates.

Oates died of a sudden, massive heart attack in his Hollywood Hills home in Los Angeles, California on April 3, 1982. He was 54. His last two films, Blue Thunder and Tough Enough, were released in 1983 and were dedicated to him. Oates now enjoys a cult following among film buffs due to his work with Peckinpah and Hellman and counts filmmakers Quentin Tarantino and Richard Linklater among his admirers. I’d like to raise a glass to Oates. He was a true original the likes of which we will never see again.

Here is a fantastic fan site dedicated to the man.