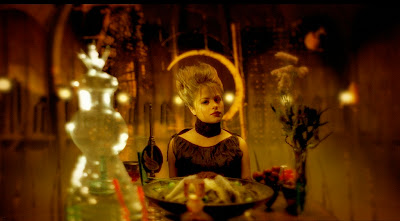 With Ghost World (2001) and Sin City (2005), comic book creators have been taking a more active role in the cinematic adaptations of their work. Following in the footsteps of people like Daniel Clowes and Frank Miller, comic book legends Neil Gaiman and Dave McKean became filmmakers. They both rose to prominence in the comic book medium collaborating on numerous graphic novels, including the popular and critically acclaimed Sandman series. With Gaiman’s impressive storytelling ability and McKean’s dazzling eye for design, a film of some sort wasn’t completely unheard of – it makes sense that they would do this as McKean’s artwork has always been very multimedia oriented, mixing photography with drawing and painting. He continued this approach with Mirrormask (2005) while also adding in CGI animation and music into the mix.


Helena (Stephanie Leonidas) is a young girl whose parents own and operate a circus. Normally, it is a kid’s dream to run away and join the circus but the fun and novelty of it wears off if you’ve grown up with it your entire life. Her father (Rob Brydon) keeps it running on “charm and peanuts,” but she doesn’t share his dream. In fact, it is the fantasy world she wants to escape for a more real one. Helena is a typically petulant teenager rebelling against her parents. Her mother (Gina McKee) is in need of a potentially life-threatening operation and has been hospitalized just as the circus begins to collapse in on itself financially. Helena is an aspiring artist with all kinds of illustrations wallpapering her bedroom (it’s like McKean’s portfolio exploded in there) and she has the most bizarre, surreal dreams.

It is during one of these dreams that she enters a strange world resembling an oil painting where eyeballs sprout spider legs and books can be opened and used to float through this dream world. It’s a place where everyone wears a mask and Helena’s circus skills become quite useful. She learns that a dark shadow is falling over the land, threatening to engulf it. The City of Light is in danger of being eclipsed by the Land of Shadows and the White Queen (McKee again) is asleep, unable to wake. Helena must find the Mirrormask if she hopes to defeat the Black Queen (also McKee) and wake the White one. This fantastical dream world and the conflict it is embroiled in is obviously Helena’s way of dealing with her real life trials and tribulations. Solving the problems in one world mirror the problems faced in the other.

The young Stephanie Leonidas does an excellent job as the audience surrogate in this strange cinematic world. She has to gain our trust and empathy in the real one so that we’re willing to follow her into the elaborately designed dream world. She is the cinematic equivalent of Little Nemo and we are invited to tag along for the ride through her Slumberland. There is also a lovely short-hand between Helena and her folks that is believable and endears us to these characters.

Mirrormask reminds me of when I saw a travelling circus as a child with its acrobats, illusionists, jugglers, clowns, and various performers. It’s a dying art form that runs the risk of becoming extinct what with so many other forms of entertainment vying for our attention these days. The early scenes in the film have a handmade feel to them and this is contrasted by the CGI landscapes of the fantasy world later on. Helena lives in a drab, colorless concrete apartment building, which is juxtaposed with the rich colors of the circus and fantasy world. There are all kinds of gorgeous shots, like a long one of the outside of the circus big top bathed in red light with nearby vehicles and trailers illuminated in gold all reflected on the water, which makes the film so fascinating to watch. McKean also shows a keen eye for composition of frame, like the shot of Helena and her father talking on the balcony of their apartment with the ocean visible to the right. 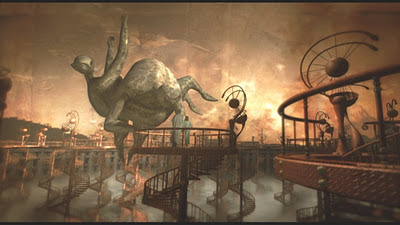 In 1999, the Jim Henson Company was studying the figures of their DVD sales for the library of their films. They noticed that their fantasy films The Dark Crystal (1982) and Labyrinth (1986) sold very well with little to no promotion. They figured that there was a decent-sized audience for these kinds of films and looked into making a prequel to The Dark Crystal or a sequel to Labyrinth but in the end decided to create something else in the spirit of these films. Executive producer Michael Polis pitched this project to Sony Pictures and out of that came The Curse of the Goblin Kingdom, which originated from conversations with artist Brian Froud, the conceptual designer of both The Dark Crystal and Labyrinth.

Lisa Henson, CEO of the Jim Henson Company, was trying to get another Dark Crystal film going and Polis approached her with his project. She agreed to work with him on it. She was friends with writer Neil Gaiman and they were planning a film version of his television series Neverwhere when she contacted him in 2001 with the idea of making a fantasy film in the vein of The Dark Crystal and Labyrinth. She asked him if artist and regular collaborator Dave McKean was interested in directing and if so would Gaiman be willing to write the story. He sent Henson a copy of a short film that McKean had made and she was impressed with the visuals and that he had made it so cheaply.

Polis considered teaming McKean up with Froud but soon realized that for the sake of coherence there could only be one particular style for the film and sided with McKean because he was going to direct. Henson and Polis then pitched Mirrormask to Sony who greenlit the film with a $4 million budget in 2003. Although, Gaiman and McKean worked for almost no salary, they were given complete creative freedom. The two men lived in different countries on different continents and ended up meeting at Henson’s house in London, England where they spent ten days creating a general story outline. It was felt that this environment was more conducive to creativity then a sterile hotel room. Gaiman wrote the script based on McKean’s specifications in 2002. For example, Gaiman came up with the idea of a girl who was part of a traveling theater and her mother got sick while McKean changed the theater to a circus (more interesting visually) and came up with the masks and the two mothers. Filming of the live-action footage took place in Brighton, England in June and July of 2003.

McKean wanted Mirrormask to have “a painterly, illustrative feel to it.” To this end, he had a very “loose working” relationship with 15 computer animators, many fresh from college, allowing for improvisation. There was never a worry that the film wouldn’t fit together because it was all based on his imagery. For example, when he designed the film’s creatures, he made them quite simple in order to give the animators a lot of room to work with. However, this approach extended the post-production phase, which was originally budgeted for approximately eight months, to 17 months.

Mirrormask was originally set for a direct-to-DVD release but it was accepted in the 2005 Sundance Film Festival and this convinced Sony to give it a limited theatrical release in the United States. The film received mostly mixed to negative reviews from mainstream critics. Roger Ebert gave the film two out of four stars and wrote, “I suspected the filmmakers began with a lot of ideas about how the movie should look, but without a clue about pacing, plotting or destination.” In his review for The New York Times, Stephen Holden called it, “an example of too much lavished on too little. Because there is often more on the screen than the eye can take in, the originality of its visual imagination is compromised.” The Washington Post’s Desson Thomson felt it was “so single-minded in its reach for fantasy, it becomes the genre's evil opposite: banality.” The Village Voice’s Michael Atkinson wrote, “The measure of conviction needed to make and read comic books is all that's brought to bear, and the result might make good dope software, if you can sit still and stay awake.” However, Entertainment Weekly gave the film an “A-“ rating and Lisa Schwarzbaum called it a “dazzling reverie of a kids-and-adults movie, an unusual collaboration between lord-of-the-cult multimedia artist Dave McKean and king-of-the-comics Neil Gaiman (The Sandman), has something to astonish everyone.” In his review for the San Francisco Chronicle, Walter Addiego called it, “richly inventive.” 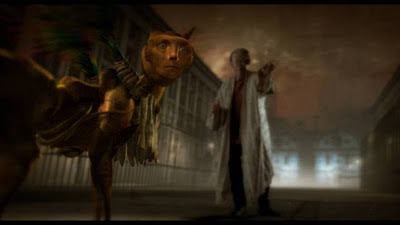 Naturally, Helena’s surreal dream world is where Mirrormask comes to life with one stunning visual set piece after another. As you would expect from a Gaiman/McKean production, it is very visual and rather non-linear in nature with a light façade but underneath lurks a darkness that is the hallmark of their collaborations. Every frame looks like a work of art, like one of McKean’s paintings come to life. There is so much to look at (like a landscape filled with red, spiral staircases) and it is a densely visual film much like a waking dream. Even though, at times, you may not know what is going on exactly, you trust that Gaiman’s storytelling abilities and McKean’s visuals are going somewhere. After recently watching Terry Gilliam’s The Imaginarium of Dr. Parnassus (2009), I think it would make a fantastic double bill with Mirrormask as both films deal with vagabond performers traveling through England and how the real world becomes intertwined with a fantasy realm, each one feeding off the other.