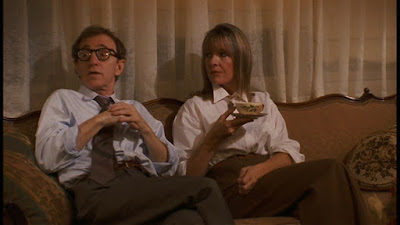 Woody Allen was in trouble. Coming off the success of Husbands and Wives (1992), he was gearing up to make Manhattan Murder Mystery (1993) with his then-wife Mia Farrow when their marriage broke up amidst allegations that he sexually assaulted one of their children, which resulted in a messy and very public custody battle over their three children. He responded by doing what he does best: making movies. He reunited with screenwriting partner Marshall Brickman and co-star Diane Keaton for a lightweight yet engaging comedy that, while receiving strong critical notices, failed to ignite the box office.

Larry (Allen) and Carol (Keaton) Lipton are middle-aged Manhattanites that have settled into a comfortable, routine existence, enduring each other’s passions (he loves hockey, she the opera). They’re also suffering a bit from empty nest syndrome and are worried that they are going to end up like Paul (Jerry Adler) and Lillian (Lynn Cohen) House, an older couple that lives down the hall: “Just another dull, aging couple with our little walks,” as Carol puts it. She fears they are turning into “a pair of comfortable old shoes,” and is looking for a spark to rekindle their relationship.

It comes in an unlikely form: Lillian dies suddenly from a heart attack. Initially, Larry and Carol think nothing of it, but over dinner with friends, she recalls how healthy Lillian was while Ted (Alan Alda), a friend of the Liptons, suggests that maybe she was killed by her husband. Later, Carol remarks that Paul seemed a little too upbeat so soon after her death. She decides to investigate further with Ted’s help, which makes skeptical Larry jealous. Did Paul really kill his wife or are Larry and Carol merely going through a midlife crisis and this is their way of dealing with it? 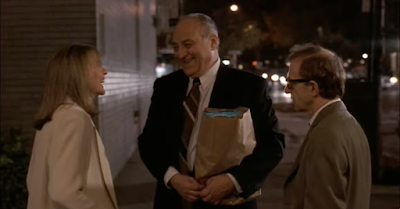 After her small role in Radio Days (1987), it was great to see Allen and Keaton reunited on-screen in another film. They slip effortlessly into their familiar rhythms, bantering back and forth as Carol immediately latches on to the murder mystery angle while Larry remains stubbornly unconvinced. Allen and Keaton clearly bring the best out of each other and it’s as if their characters from Annie Hall (1977) got married and settled into predictable domesticity. He establishes the Liptons’ stifling predictable routine early on in the film as Larry looks forward to watching a Bob Hope movie on television that night only to complain, “I don’t know why they put it on so late.” The Woody Allen of Manhattan (1979) would’ve stayed up late with Mariel Hemingway to watch it. The Woody Allen of this film, however, has gotten too old and set in his ways. This murder mystery is exactly what he and Carol need to rekindle the spark in their relationship.

Keaton, in particular, is wonderful as the instigator – getting the Liptons out of their rut with her fixation on Lillian’s murder. She brings her trademark vibrant energy and screen presence to the role. While Larry is content with where they’re at as a couple at this stage in their lives, Carol wants something more, like starting up a restaurant with Ted and then trying to solve Lillian’s murder. It is great to see her playing a proactive character while Allen is the passive one. Carol hones her amateur detective skills with Ted and the scenes where they excitedly theorize about the murder like kids are some of the best moments in the film. As he tells her at one point, Yes, this is crazy. But soon we’ll be too old to do anything crazy.” Alan Alda also shines in these scenes. With his knack for delivering witty banter, he is a perfect fit for Allen’s films and it is a shame he wasn’t in more of them as he really should’ve become part of his stable of actors.

Once again, Allen acts as the ideal foil for Keaton, responding to Carol’s newfound zeal for murder mysteries with his trademark neurotic angst (“You gotta go back to your shrink…You know how General Motors recalls defective cars? You gotta go in for a tune-up.”). Larry complains and criticizes what she’s doing but none of it deters her. Allen continued to show his knack for physical comedy as evident in the scene in which Anjelica Huston’s stylish writer teaches Larry how to play poker. It isn’t until an hour in that he realizes what he must do – take more of an interest in Carol’s obsession with Lillian’s murder if he wants to avoid them drifting apart. He’s also jealous of Ted and his boyish enthusiasm for her. It isn’t until he goes on a stakeout with her and they see something suspicious that Larry is finally convinced of what Carol has been saying all along. He finally believes her and goes from being passive to assertive. 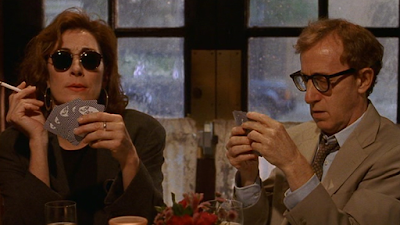 The screenplay for Manhattan Murder Mystery originally started out as an embryonic incarnation of Annie Hall co-written with Marshall Brickman but Allen didn’t feel that it was substantial enough even though he loved mysteries and had always wanted to make one. He told Brickman that he should write and direct it and he would star in it. Over various rewrites, this element was abandoned as he decided to go in a different direction. He even told Brickman to go off and make it on his own but this didn’t happen. In 1992, Allen contacted Brickman and they worked on the story some more.

Allen had originally written the role of Carol for his then-wife Mia Farrow but after they divorced and became in embroiled in a contentious custody battle over their children, he called Diane Keaton and asked her to play the role of Carol. She immediately accepted. The film was shot in the fall of 1992 on the streets of Greenwich Village and the Upper West Side. For Allen, making the film was a form of escape as the “past year was so exhausting that I wanted to just indulge myself in something I could relax and enjoy.”

He found it very therapeutic working with Keaton again. After getting over her initial panic during her first scene with co-star Alan Alda, Keaton slipped back into her old rhythm with Allen. Anjelica Huston observed that the set was “oddly free of anxiety, introspection and pain,” and this was due to Keaton’s presence. According to Allen, Keaton changed the dynamic of the film as “I always look sober and normal compared to Keaton. I turn into the straight man.” 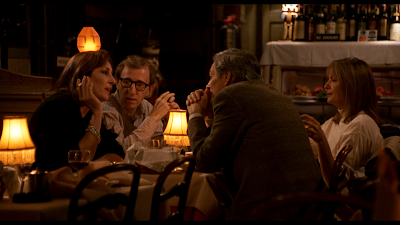 Manhattan Murder Mystery enjoyed decent reviews. Roger Ebert gave it three out of four stars and called it an “accomplished balancing act.” Newsweek’s David Ansen wrote, “On screen, Keaton and Allen have always been made for each other: they still strike wonderfully ditsy sparks.” In her review for The New York Times, Janet Maslin wrote, “Although, Manhattan Murder Mystery struggles with its own contrivances, it achieves a gentle, nostalgic grace and a hint of un-self-conscious wisdom.” The USA Today’s Mike Clark gave it four out of four stars and wrote, “It’s very, very funny, and there’s no mystery about that.” In his review for the Washington Post, Desson Howe wrote, “There is however, little ‘new’ in this film. Allen and Keaton are essentially playing Alvy Singer and Annie Hall gone middle-aged.” Entertainment Weekly gave it a “B” rating and Owen Gleiberman wrote, “Allen and Keaton make an endearing team. It’s a pleasure to see them reunited, not just because we’re spared Mia Farrow’s dishrag mopiness – surely the one piece of positive fallout from the Allen-Farrow split – but because Keaton’s smiling radiance has only deepened with the years.”

Manhattan Murder Mystery takes an amusing look at a married couple whose life has become safe and routine only to be revitalized by murder. It warns of the danger of not being open to something new, be it opening a restaurant or solving a murder. Obviously, there are things that you do every day that are unavoidably predictable – that’s just life – but when this extends to what you do with your spouse you run the risk of losing sight of what made it so exciting to be with them in the first place. It happens all the time and as the film points out, you need to take an active interest in what your spouse wants.

When Manhattan Murder Mystery was released in 1993, the highly contentious court case between Allen and Farrow was fresh in people’s minds and it impacted on the film’s box office as it failed to make back its modest budget. To add insult to injury, TriStar Pictures ended their deal with him. There was speculation at the time that the deal wasn’t extended due to his personal problems and that his films weren’t very profitable but he denied it in interviews. Undeterred, he simply cut a deal with another studio and continued making films, bouncing back with Bullets over Broadway (1994), which garnered 7 Academy Award nominations with Dianne Wiest winning for Best Supporting Actress. Manhattan Murder Mystery holds a special place in the hearts of many Allen fans as it was callback to the days of Annie Hall and Manhattan and was the last time he and Keaton appeared in a film together. 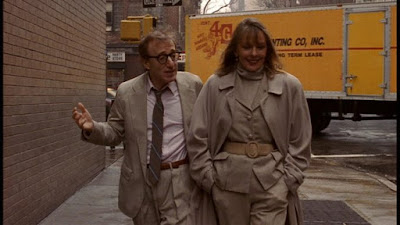