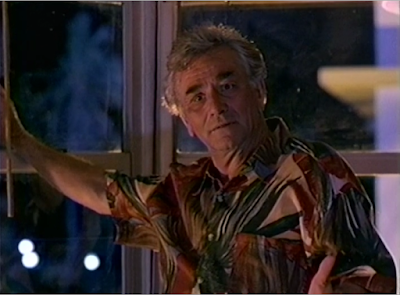 Somewhere, there’s an alternate universe where James Le Gros is playing recurring Elmore Leonard character Deputy United States Marshal Raylan Givens in a series of television movies instead of Timothy Olyphant in a T.V. series. Watching Le Gros in Pronto (1997) is a study in contrast of styles to what Olyphant would do later in Justified. Airing two years after Get Shorty (1995) was released in theaters, and based on the 1993 novel of the same name, Pronto clearly tries to ape it in style and tone only with less money and star power in front of the camera.

Leonard fans will find themselves on familiar turf right from the get-go as we are introduced to Harry Arno (Peter Falk), a Miami Beach bookie who’s been skimming off the top from the mob for years. He has his regular customers and haunts – everything seems to be going swimmingly until he’s tipped off by police detective friend Buck Torres (Luis Guzman) that the Feds are tapping his phone and his boss, Jimmy “The Cap” Capotorto (Walter Olkewicz), has put a hit out on him.

Pretty soon someone tries to take Harry out (although, he certainly knows how to take care of himself) and Raylan shows up in the lobby of his building. Harry invites the lawman up and we get Le Gros’ take on Raylan. He saunters in wearing a suit and a big white cowboy hat that looks completely out of place in neon-drenched Miami. He spots Harry and gives him a big, corn-fed grin, which screams hayseed and when he opens his mouth out comes the equivalent of a southern Boy Scout. 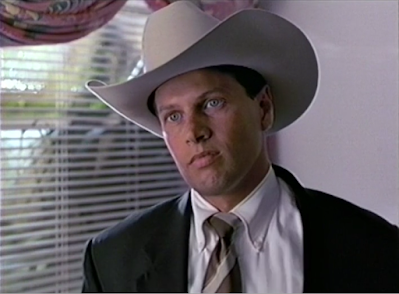 He tries to convince Harry to testify against Jimmy and in return he will protect him. Not surprisingly, Harry’s not the testifying type and gives Raylan the slip, taking refuge in an Italian town that has special significance for him from World War II. The rest of the movie plays out seeing who will find him first – Raylan or sadistic mob tough guy Tommy “The Zip” Bucks (Sergio Castellitto), who wants to make sure Harry doesn’t testify.

Peter Falk plays his usual, easy-going self, breezing his way through the movie as only he can. Harry is a smart guy, a typical Leonard protagonist who is always one step ahead of everyone else, always thinking, especially when everyone is looking for him. Le Gros initially plays Raylan as a little too cartoonish but as the movie progresses one realizes that this is a conscious choice. Raylan has created a country bumpkin-ish façade so that his enemies underestimate him. As the stakes get higher and the situations get more serious, the façade falls away and the actor brings a wonderful intensity to the role revealing a deadly determined lawman.

Pronto is directed by Jim McBride but you’d hardly know it from the flat, functional lighting in many scenes and the predictable framing. Where is the visual flair of Breathless (1983)? Where is the playful, anarchic energy of Great Balls of Fire (1989)? With the exception of some nifty transitional wipes between scenes, the man that made those films is absent. I understand, sometimes you have to do jobs to pay the bills, but one would think based on past adaptations that his visual style would be perfect for Leonard’s material, which makes this feel like a missed opportunity. 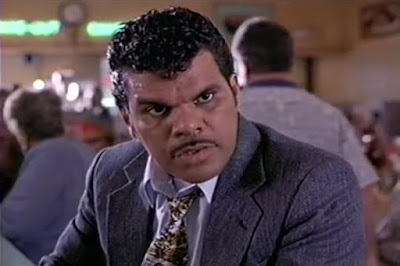 Fortunately, screenwriter Michael Butler, who penned notable crime thrillers The Gauntlet (1977) and Flashpoint (1984), does an excellent job adapting Leonard’s book, preserving the snappy dialogue, and he’s aided by a talented cast that tries to give life to his script in the way we’ve come to expect in more successful adaptations, such as Jackie Brown (1997) and Out of Sight (1998), it’s missing the vivid style to compliment it. Still, Falk, Glenne Headly and especially Le Gros are good enough to keep one watching until the end. Ultimately, it is unfair to compare Le Gros’ take with Olyphant. The latter had six seasons and 78 episodes to flesh out Leonard’s character and bring him to life, Le Gros had a 100 minutes and did the best with what he had to work with, delivering an engaging performance that always makes me wonder what could have been?
at June 19, 2020 No comments: