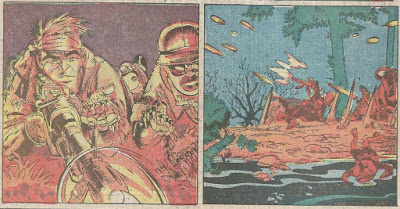 It was 1986 when my fascination with the Vietnam War began. It was an unpopular war in the United States while it raged and one that was lost to a technologically inferior fighting force with much more to lose. Years after, the country had not come to terms with it until Oliver Stone’s Platoon (1986) came out and even then, it was only the beginning. I wasn’t old enough to see it in theaters (I rented it as soon as it came out on home video) but in the meantime I bought the novelization and read it cover to cover several times.

That year, Marvel Comics capitalized on the Vietnam War zeitgeist that was taking off and began publishing The ‘Nam, a comic book about U.S. foot soldiers serving in the war. Much like Platoon it was written by veteran Doug Murray that fought in the war, which gave it an authenticity. He was teamed up with artist Michael Golden and together they introduced us to the war through the eyes of new recruit PFC Ed Marks, following him on his one-year tour of duty with each issue chronicling a month in country.

While constrained somewhat by the Comics Code (no F-bombs, drugs or explicit violence), Murray and Golden managed to convey the feeling of what it was like to have been there thanks to the latter’s expressive and colorful artwork that was sorely missed after he was replaced on issue 14. The comic carried on for several years until outstaying its welcome when Murray left and lagging sales lead to the Punisher making several guest appearances. 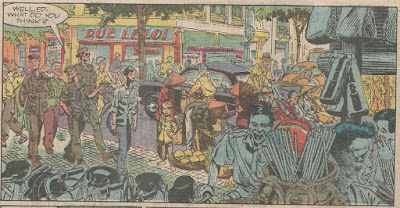 Issue one began in January 1966 with Ed joining the 33rd Mechanized Infantry. He reports to the First Sergeant and is completely oblivious to the bribe that the man wanted in exchange for giving him a cushy assignment. Ed is assigned to Sgt. Polkow’s platoon where he meets and befriends Mike who, once they are out on patrol, gives him a crash course in some of the basics of surviving out in the field, like how to spot a booby trap and how to get water that is safe to drink in a canteen.

The first thing that strikes you about The ‘Nam is Golden’s artwork – an amazing juxtaposition of characters rendered almost cartoonish with exaggerated features, like Ed’s big, expressive eyes and Mike’s tall, lanky physique, with realistically rendered weapons, vehicles and setting. By doing this, each character has their own distinctive look, which helps you remember who everyone is among the sea of military fatigues. The artwork also set the tone and look of Vietnam, from soggy rice paddies to the lush jungle. Golden’s style is very cinematic as he uses color to express a mood, like bathing Ed in blue as he reflects on his first trip into the jungle only to be startled in the next panel by an explosion off in the distance, illuminating his face in red and yellow.

Golden’s atmospheric artwork is supported by Murray’s excellent writing as each issue shows a certain element of the foot soldier’s experience in Vietnam. For example, the second issue showed a clash between the corrupt first sergeant and Sgt. Polkow over the treatment of one of the former’s preferred soldiers in the field under the latter’s command. The first sergeant sends them back into the jungle only four hours after they just came back, following regulations while also sticking it to Polkow. Things build to a possible confrontation that is narrowly defused in the end. In the next issue, we see Saigon as Mike and Ed get three-day passes to celebrate a fellow soldier going back home in three days. This allows Murray and Golden to immerse us in the sights and culture of the city in fantastic detail. Their rest and relaxation doesn’t turn out so well as the three men are subjected to terrorist attacks. In a striking bid for authenticity, every issue saw Murray incorporating slang the foot soldier used at the time, like “Top” for first sergeant or “short” for not having much time left on your tour of duty or Vietnamese sayings, like “xin loi” for "sorry about that." At the back of each issue was a glossary explaining what all the slang meant. 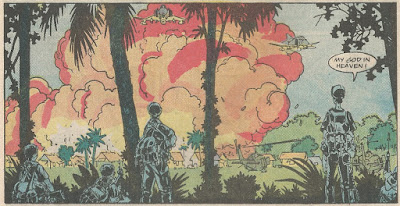 Comic book editor Larry Hama was interested in doing a story on the Vietnam War for his black and white magazine Savage Tales. In 1984, he reached out to Doug Murray, one of the few fellow veterans in the comic book field he knew. Murray ended up writing The 5th of the 1st and it was well-received. Hama recommended Murray put together a proposal for a comic book title and he would give it to Marvel Comics.

At the time, editor-in-chief Jim Shooter was looking to take some chances at Marvel, branching out with non-superhero stories that were “experiments in different sub-genres,” according to Murray. Shooter liked Murray’s work in Savage Tales and had a mock-up cover made for a proposed series about the Vietnam War by taking an existing G.I. Joe cover and putting on a fake logo that said, “NAM.” Hama and Murray agreed that the comic book should be about ordinary people: “These weren’t super-soldiers, they were kids you knew in high school, the guys who pumped gas at the Texaco, the guys who went back to ‘The World’ and sold insurance or managed 7/11s.”

Hama suggested Murray tell the story from the point-of-view of the foot soldier in a platoon with each issue taking place over a month so that the reader would be experiencing it over the same amount of time as the characters. It was important for him to work within the Comics Code so that the title could reach a larger audience. He knew that a lot vets had trouble talking about their experiences in the war, especially ones that were parents and this was a way their kids could learn about some of the things that happened over there.

At the time, Michael Golden was set to do Batman for DC Comics but was also tired of drawing superheroes. He got a call from Hama who pitched him the idea for The ‘Nam. He was interested in doing something about the Vietnam War and had worked with Murray on The 5th of the 1st. He agreed to work on the title. Initially, Murray figured the comic book would last 12 issues and was surprised when it became popular.

The ‘Nam was not G.I. Joe. There was no overt patriotism, no ninjas, no superhuman feats – just regular guys trying to stay alive until they were able to go back home. Murray kept things as grounded as possible until a regime change at Marvel prompted him to leave and the quality of the title went downhill as the Punisher made a few appearances in a desperate attempt to boost sales. Its run ended in September 1993. Its decline in quality did little to diminish what Hama, Murray and their collaborators achieved and The ‘Nam deserves its place among some of the best literature on the Vietnam War from that period.