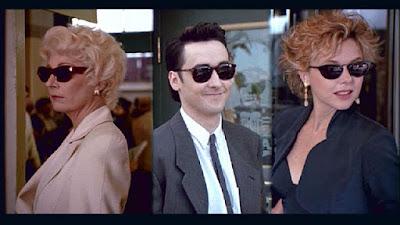 This quote always makes me think of The Grifters (1990), a film that presents a world of confidence artists – people who gain the trust of their targets only to then fleece them of something valuable. Essentially there are two kinds of people in this world: the grifters and the people they con. The film takes it one step further and has the grifters con each other but muddies the waters with notions of family and love. Who can you trust? The answer is simple and yet hard-earned: no one.
Roy Dillon (John Cusack) is a small-time operator working the short con, scamming bartenders and hapless patrons out of chump change. His estranged mother Lilly (Anjelica Huston) is a mid-level grifter, working for a powerful mobster (Pat Hingle) at race tracks, betting on certain horses to lower the odds. Roy’s girlfriend Myra (Annette Bening) is a high-end grifter who works the long con – ambitious schemes that swindle wealthy marks. All three have their established methods that work for them except when they don’t as evident when Roy tries to scam a savvy bartender who proceeds to hit him so hard with a club that he suffers serious internal injuries.
When Myra can’t get what she wants from a local jeweler (Steve Tobolowsky) she attempts to use her feminine wiles with no success. When Lilly fails to lower the odds more than she should have, her boss punishes her by stubbing out a lit cigar on her hand in an ugly display of power. Their lives all get complicated when Lilly decides to visit her son while on business in Los Angeles. There’s visible tension between them that goes way back. When Myra finds out that Lilly is a fellow grifter she sets her sights on the elder Dillon unbeknownst to Roy who is unaware that his girlfriend is in the game. 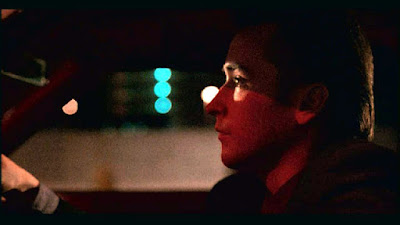 For years John Cusack had done a series of successful teen comedies and by 1988 was looking for more mature roles in films made by auteurs like Roland Joffe (Fat Man and Little Boy), John Sayles (Eight Men Out) and with The Grifters, British director Stephen Frears. Back then there was an innate likability to Cusack that audiences identified with but on this film, he dials it back in a much more controlled performance as a grifter that thinks he’s in control and can walk away from the life whenever he wants only to find out it’s not that easy.
Annette Bening plays Myra like a vivacious sex kitten who knows how to use her body to get what she wants but under the façade is a ruthless professional con artist. The flashback scene where we see her in action with her ex-partner (a superbly cast J.T. Walsh) as they play their target (Charles Napier) is a wonder to behold as they expertly massage their mark to pull off a sizable payday.
It is Anjelica Huston that is the film’s M.V.P. as the veteran grifter that has been in the game long enough to know her limitations. Lilly spots Myra right away and the scenes between Huston and Bening crackle with playful intensity as they trade verbal barbs. Huston also shows why Lilly has survived for this long, whether it’s how she deals with her ruthless boss or a creep hitting on her at a diner. Yet for all her cold logic, she shows a vulnerable side when it comes to Roy as her long-buried maternal instincts surface and she finds herself wanting to reconnect with him. Huston does an excellent job of showing both sides of Lilly and how, ultimately, she’ll do anything to survive. 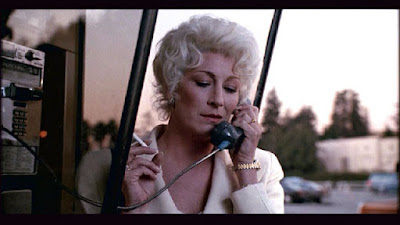 Director Stephen Frears gives the film a timeless look. Even though it is set in 1990, it could easily be the 1940s as all three main characters do not wear any trendy clothing that would date them instantly. Even the dialogue treads the line between classic grifter lingo and contemporary speak courtesy of legendary crime writer Donald E. Westlake (The Hunter), who does a brilliant job of adapting Jim Thompson’s 1963 novel. He populates the film with snappy dialogue, such as Lilly and Myra’s first meeting when the latter says, “I’m Roy’s friend,” to which the former responds, “Yes, I imagine you’re lots of people’s friends.” He immediately establishes an antagonistic relationship between the two characters that starts off as playful verbal sparring but escalates when Myra finds out that Lilly is also a grifter.
The entire film has a low-key classic feel to it with wonderful bits of detail, like the old school switchboard in Ray’s building. This also applies to the minor yet colorful characters that are sprinkled throughout The Grifters, such as the annoying older man (Henry Jones) who works the front desk of Roy’s apartment building. Every time someone comes in we are subjected to his personal philosophy on women, how to properly fold a towel and so on. There’s also the scene where we get Roy’s backstory on how he became a con artist when he meets a veteran grifter (the wonderfully cast Eddie Jones) who teaches him the nuts and bolts of the business: “But to take another pro, even your partner, who knows you and has his eye on you, that’s a score.” This key line of dialogue could be the film’s thesis.
Filmmaker Martin Scorsese wanted to know what was the best crime novel that had not been made into a film and was told it was The Grifters by Jim Thompson. He and executive producer Barbara De Fina were given a spec screenplay by Robert A. Harris and another man. Scorsese was too busy and called British filmmaker Stephen Frears in 1987. He asked if he had heard of the novel. Scorsese was a fan of the latter’s My Beautiful Laundrette (1985) and felt that Frears was the right person to direct The Grifters as he felt that he had an affinity for unusual characters. Frears read the novel and agreed to direct. 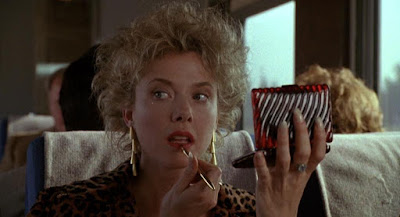 The screenplay was initially developed at Disney where Scorsese had a deal and Donald E. Westlake went to work adapting the novel but the studio eventually decided not to back it. Originally, Westlake didn’t want the job but Frears told him the think about it terms of Lilly’s story as opposed to Roy’s and the writer agreed to do it. Cineplex Odeon agreed to finance the film but over the course of the production the budget gradually shrunk as the backers were going bankrupt.
Originally, Melanie Griffith was cast as Lilly, Geena Davis as Myra and Cusack as Roy, who had read the novel in 1985 and was so taken with it that he had wanted to make it into a film himself. Frears had also briefly considered Robert Downey Jr. and Tim Robbins for Roy but when Cusack heard that Scorsese and Frears were attached to the project, he active pursued the role and got it. Anjelica Huston was cast towards the end of pre-production, just beating out Sissy Spacek. She had been contacted by Frears in 1989 while making Crimes and Misdemeanors (1989) but after reading the script she was unsure about the part, shocked by the scene where Lilly is beaten by her boss. Ricky Jay was hired as a consultant and helped Cusack prepare for his role by arranging for the actor to meet actual con artists. Cusack saw Roy as “a wonderfully twisted role to dive into.”
The Grifters received glowing reviews from most mainstream critics. Roger Ebert gave the film four out four stars and wrote, "One of the strengths of The Grifters is how everything adds up, and it all points toward the conclusion of the film, when all secrets will be revealed and all debts collected." In his review for The New York Times, Vincent Canby praised Anjelica Huston's performance: "Miss Huston is again spectacular. Not since The Dead has she had a role of such eerie complexity, nor given a performance that was so haunting. Though Lily is a sly, unpleasant woman, out always for the main chance, Miss Huston discovers the sadness within that comes close to true tragedy." Entertainment Weekly's Owen Gleiberman gave it a "A" rating and wrote, "It’s Anjelica Huston who gives the film its emotional gravity. There’s almost nothing likable about Lilly. She’s callused over; she perseveres, period. But Huston, looking weirdly like a drag queen in her puffy, bleached-blond hair, plays her with such indomitable negative charisma that in the end the character doesn’t win your affection so much as your respect."
In his review for the Washington Post, Hal Hinson wrote, "The line Westlake and Frears walk skirts the edge of parody; it's the most puckish of film noirs. Their characters are scoundrels, but they have a hipster's arrogance; they play the sucker for nobody, and the sneaky thrill here comes from watching them work the angles for the upper hand." Finally, Newsweek's David Ansen wrote, "Huston dominates the film, but Bening, an effervescent sex kitten with the soul of a snake, and Cusack, with his brittle self-protectiveness, are spectacular in their own ways. These doomed grifters deserve instant admission into the film noir pantheon." 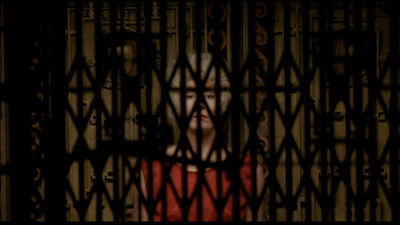 When The Grifters concludes, we are left with a world of con artists that aren’t all that attractive. It can be a brutal and ugly world where people go insane, get killed on a deal gone bad, or go on the run, always looking over their shoulder. There’s a reason why Lilly has survived for this long. Years of experience of making mistakes and learning from them has toughened her up as evident from the final scene where she accidentally (or was it?) causes the demise of another character that ends the film on a decidedly dark note. The Grifters isn’t a cute, we-all-got-away-with-it ending like Steven Soderbergh’s Ocean’s movies, just people surviving any way they can even if it means killing in order to do it.
SOURCES
“Seduction, Betrayal, Murder: The Making of The Grifters.” The Grifters Blu-Ray. 441 Films and 101 Films. May 21, 2018.
Sharkey, Betsy. “Anjelica Huston Seeks the Soul of a Con Artist.” The New York Times. December 2, 1990.
“The Making of The Grifters.” The Grifters DVD. Miramax. September 24, 2002.
Van Gelder, Lawrence. “At the Movies.” The New York Times. August 31, 1990.
at November 28, 2020 No comments: