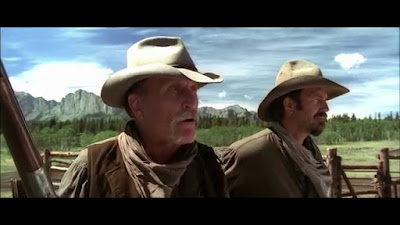 Kevin Costner was already an acclaimed and popular actor when he starred in and directed Dances with Wolves (1990). The film was a critical and commercial success but he soon became too ambitious for his own good with the disastrous, high-profile one-two punch of Waterworld (1995) and The Postman (1997). The critics turned on him and they failed to connect with a mainstream audience like Dances had, prompting him to focus more on acting and be choosier with his directing gigs.

Open Range (2003) saw Costner not only return to the western genre but also to the director’s chair after six years. As he did with Dances, the filmmaker put up his own money to help make the film and adjusted his ambitions by making a straight-up crowd-pleasing story that married the entertaining thrills of a western like Tombstone (1993) with the no frills meditation on violence of Unforgiven (1992).

Four men are driving a herd of cattle through an open range in Montana, 1882. Boss Spearman (Robert Duvall) and Charley Waite (Costner) are the two veteran cowboys aided by two inexperienced young men Mose Harrison (Abraham Benrubi) and Button (Diego Luna). The film quickly establishes the dynamic between these men as they wait out an intense thunderstorm by playing cards. After the storm passes, Costner shows the men performing daily chores with little bits of business like how Charley approaches a skittish horse. Every man pulls his own weight as Mose says to Button and we see them work together to get their wagon out of the mud from the storm. Driving cattle is hard work and Costner doesn’t let us forget it. He also indulges in the romance of it with a montage of lovingly crafted shots of cattle being herded over the countryside.

On the surface, Boss is the grizzled cantankerous veteran, Charley is the ex-gunslinger with a dark past while Mose and Button are like brothers. It’s a testament to the skill of these four actors that after only spending ten minutes with their characters we are right there with them due to their camaraderie. We are invested in their story. When these men work and live off the land together like they have, a permanent bond develops between them. When this dynamic is threatened we want to see those responsible get their comeuppance.

When Mose fails to return from a supply run at a nearby town, Charley and Boss go investigate. They find out that he’s in jail after mixing it up with some local cattlemen. It sounds out of character for Mose and a conversation with Marshal Poole (James Russo) confirms that something isn’t right. Sure enough, local cattle baron Denton Baxter (Michael Gambon) chimes in. He doesn’t like free grazers like Boss and Charley because he doesn’t want the competition. He threatens them and they take the badly beaten Mose to Doc Barlow (Dean McDermott) and his beautiful assistant Sue (Annette Bening). Of course, Baxter won’t let things go and sends four masked men to intimidate them. The inevitable confrontation results in tragic consequences and the rest of Open Range plays out Charley and Boss getting revenge on Baxter and his men.

Costner expertly uses the widescreen aspect ratio right out of the gate as the title card appears over a wide vista with a cattle drive dwarfed by ominous storm clouds off in the distance. It not only gives a sense of place but also sets the mood. It is this kind of iconography that makes westerns distinctive from other genres.

One of the great pleasures of Open Range is seeing Kevin Costner and Robert Duvall share the screen together. They play well off each other with a believable short hand between their characters conveying years spent together working off the land. They get on each other’s nerves once in awhile, but they also have a great respect for one another. Over the course of the film they get moments where the two men tell each other things about themselves that they didn’t know. It gives us valuable insights into their respective characters.

Duvall’s Boss is a man who has a way with words, telling the townsfolk what Baxter and his men did to Mose and Button, or talking reassuringly to an unconscious Button. Costner’s Charley, on the other hand, is a man of few words but when he does speak he means every one of them. He’s a man who has lived a violent past and is trying to lead a better one but Baxter forces him to get in touch with his violent nature once again.

It is also refreshing to see Costner avoid casting some young, up-and-coming actor to play his romantic interest and opt instead for someone his age like Annette Bening who can more than hold her own. She doesn’t play a damsel in distress (until later) but someone who is capable of using her medical expertise to help Mose and Button after they’ve had run-ins with Baxter’s men. She’s lived life and is not afraid of Charley’s violent past because she’s seen the honorable man he is now.

Costner is a generous actor, giving Duvall and Bening plenty of screen-time and meaty speeches to show off their chops. That’s not to say he marginalizes his role in the film. Initially, Charley seems to be a man of few words but it is only because it takes him awhile to warm up to people. Around Mose, Button and especially Boss he’s not afraid to speak up and tell them what’s on his mind. It’s as if Costner is coming at the film like a fan and wanted to see a veteran actor like Duvall in another western.

Based on Lauran Paine’s 1990 novel, The Open Range Men, Open Range marked Kevin Costner’s return to the directing chair since The Postman and the first western he appeared in since Wyatt Earp (1994). At the time, it was considered a risky move for the filmmaker, which he was very much aware: “The western is a very scary thing for Hollywood, and I’m sure they’re saying, ‘Gee, if Kevin really needs a hit, what in the hell is he doing making a western?’” He and his fellow producers, Jake Eberts and David Valdes, were so committed to the project that they each put in a lot of their own money into it, much as he had done on Dances with Wolves.

They began scouting locations on March 15, 2002 in Canada when they realized it wasn’t feasible to shoot in the United States. They spent months searching the prairies until finding Nicoll Ranch at Jumping Pound Creek, the Turner Ranch and the Hughes Ranch for the cattle driving and range camp scenes. Looking for a place where the fictional frontier town would be located proved to be difficult until they finally discovered the Stoney Nakoda First Nations Reserve west of Calgary but it had no access road. Before the town could be constructed, a one-and-a-half mile dirt road had to be built across the reserve. The filmmakers spent four weeks conducting research and design in Los Angeles. The art directors and designers worked from history books and pictures by pioneer photographers like Silas Melander and Evelyn Cameron. 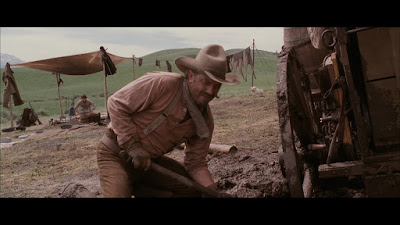 Putting in a significant amount of his own money allowed Costner to achieve the authenticity he desired, which included spending $2 million building a fully-functioning frontier town. Construction of the town took nine weeks with great care taken to recreate period detail. All the lumber was milled to historical period sizes and weathered for the exterior of buildings. The window glass for the town was hand blown and imported. Even the color palette that was used reflected paint sample charts from 1880. All of this attention to detail allowed Costner to film both exterior and interior shots on location.

The production encountered a few challenges. Nine weeks before principal photography began, Robert Duvall broke his ribs in a horseback-riding accident. Filming began on June 17, 2002 with a budget of $23 million. During the first few weeks, Costner’s appendix ruptured but went undiagnosed until he was rushed to the emergency room two months after the production finished.

Open Range received mixed to positive reviews from critics. Roger Ebert gave the film three-and-a-half out of four stars and wrote, “Kevin Costner's Open Range, an imperfect but deeply involving and beautifully made Western, works primarily because it expresses the personal values of a cowboy named Boss and his employee of 10 years, Charley.” In his review for The New York Times, A.O. Scott wrote, “Mr. Duvall knows the difference between underacting and overacting, and knows when each is called for. He plays his part, a thin fantasy of crusty frontier benevolence, as if it were a mediocre poker hand, bluffing Boss into someone bigger and more exciting than he has any right to be.” The Washington Post’s Desson Howe wrote, “There's a lot in this movie, simple, big, small and exciting. It's the year's first serious contender for big prizes. What's not to like about this picture?”

Entertainment Weekly’s Owen Gleiberman gave the film a “B” rating and wrote, “Duvall and Costner play together like a seasoned team: They’re wary, unsentimental colleagues whose opposing rhythms — Boss is spiky and righteous, the mellow Charley is slower to anger — never undercut their silent allegiance.” In his review for the Los Angeles Times, Kenneth Turan wrote, “Though his choice of roles has not always been wise, Costner is very much a movie star, and his reversion to an Unforgiven dark side is in many ways more believable than his fumbling courtship of the forthright Ms. Barlow.”

Costner doesn’t want to reinvent the western with Open Range. He simply wants to tell an entertaining story about hard-working men that stand up for their rights to live life on their own terms. The two-hour running time may seem indulgent to some but the film never feels too long. He lets things breathe and allows us to spend time with these characters and get to know them so we care what happens when things go south.

There’s something to be said for telling an entertaining story well. So often these days story is sacrificed for spectacle. In this respect, Open Range is a refreshing call back to classic westerns like Red River (1948) but with aspects of revisionist westerns like Unforgiven. This film is not afraid to tell a simple story where the good guys beat the bad guys and it works in part because it’s done in a sincere way.