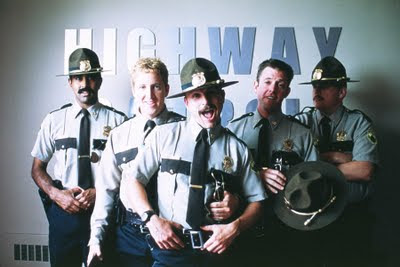 Super Troopers (2001) is, by far, the funniest comedy about a ragtag group of police officers since Police Academy (1984). Of course, that’s not saying much as its only competition is, well, Police Academy 2-7. Super Troopers is the brainchild of Broken Lizard, an American comedy troupe made up of five friends who went to the same New York university together. In the mid-1990’s they made a series of short films for Comedy Central before shooting their first feature film Puddle Cruiser in 1995. They have made four films since then with Super Troopers being their best and funniest effort to date. When the film had its premiere at the 2001 Sundance Film Festival, it reportedly inspired rowdy screenings that convinced Fox Searchlight Pictures to give it a theatrical release in 2002. It was a moderate commercial success but didn’t really garner a dedicated cult following until it was released on DVD and given regular rotation on Comedy Central.


Super Troopers follows the zany hi-jinks of five Vermont State Troopers as they try desperately to save their station from being shutdown while also butting heads with the local police. Sound familiar? While the plot is nothing original, it is done in the fine tradition of slobs vs. snob comedies like Animal House (1978) and Stripes (1981). I would even go so far as to say that Super Troopers is one of the funniest comedies released in the last 10 years, along with Anchorman: The Legend of Ron Burgundy (2004). So, what makes Super Troopers so damn funny? Let me count the ways in the same fashion as Sean Gill's hilarious tribute to Bloodsport over at his blog.

1. .38 Special: Broken Lizard actually got this hard rockin’ band from the 1970’s to do the film’s score (along with The Unband) and they kick things off in style with a badass song, which, in turn, gives the film some badass street cred. No classy Elmer Bernstein-esque soundtrack for this film. In addition to those rockers, the soundtrack is populated with songs by the likes of Nashville Pussy and Southern Culture on the Skids. 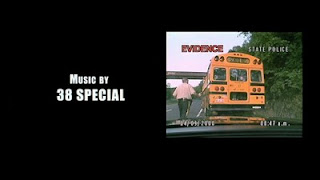 2. Drug humor: In the first three minutes of Super Troopers, a hapless college kid (Geoffrey Arend) ingests a bag of weed and a baggie of magic mushrooms before the state police can pull and bust him and his two stoner friends.﻿﻿﻿
﻿﻿﻿
3. “Littering and…”: In what is one of the film’s funniest scenes, Lieutenant Arcot "Thorny" Ramathorn (Jay Chandrasekhar) and Trooper Robert "Rabbit" Roto (Erik Stolhanske) question three stoners they pulled over for “speeding” and proceed to fuck with their minds by asking them several questions, get back into their car, and leave, only to return and ask them the exact same questions! Not only does it unnerve the hapless college kids but it really freaks out the guy who ate all those drugs. In a nice touch, Thorny uses his flashlight during questioning even though it appears to be in the middle of the day! 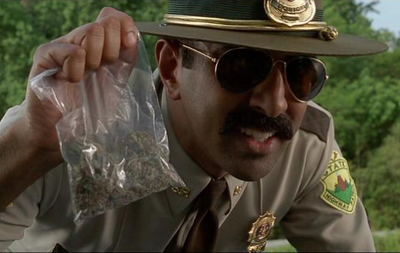 4. Fake speeder: The questioning of the three stoners is interrupted by a long-haired speeder who, as it turns out, is actually a state trooper himself.
After downing four shots of alcohol he “commandeers” the cop car and fools/scares the college boys into believing he shot the cops and is going to take them south of the border. What a great way to start a film.﻿
﻿
5. Gratuitous maple syrup chugging: When they’re not harassing dopey college kids, these state troopers like to sit back and relax by seeing who can chug an entire bottle of maple syrup faster. If this sequence doesn’t put you off the stuff then nothing will. Apparently, the key to success is to open your throat, relax the jaw and possess powerful lips. “Don’t forget to cup the balls,” as Trooper MacIntyre "Mac" Womack (Steve Lemme) wisely notes. 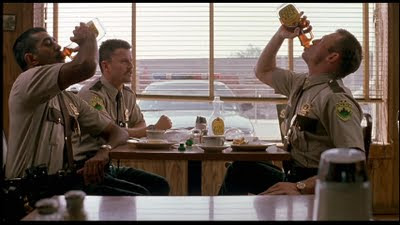 6. Mac: Played to smartass perfection by Steve Lemme, Mac is easily the funniest guy of the group. He’s a notorious practical joker and good in a fight as evident in the way he mocks one of the dumb local cops and then hits him not once but twice with empty syrup bottles. It also helps that next to Nelson of The Simpsons, he has one of the all-time great mocking laughs. 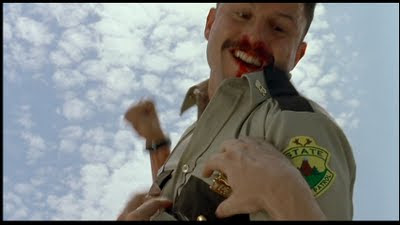 7. State cops vs. local cops: Early on, Super Troopers sets up an antagonistic relationship between the rival law enforcement groups. The state troopers are in danger of losing their jobs if they don’t dramatically up their arrest quotas while the local cops do their best to undermine them by stealing their busts. Will our goofy gang of screw-ups prevail? The head of the local police is played by none other than Daniel von Bargen, known for playing all kinds of authority figures and heavies in film and television (including a creepy role in Clive Barker’s Lord of Illusions). He does his best John Vernon in Super Troopers and I almost expected him to put our heroes on double secret probation. 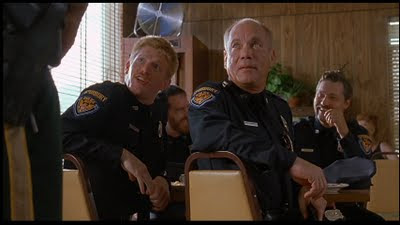 8. Brian Cox eats soap: Yes, Hannibal Lector himself plays Captain John O'Hagan, the commanding officer of the state troopers. He has the enviable task of keeping his goofball charges in line even if it means taking a big bite out of a bar of soap. Now, that’s what I call commitment.
﻿ ﻿ 9. Cat game: Another way these guys mess with motorists they pull over is to see how many times one of them can insert the word “meow” into a conversation. The current record is six but Mac thinks that Trooper Jeff Foster (Paul Soter) can do 10. The poor motorist is played by none other than comedian Jim Gaffigan and it is funny to see him trying not to laugh when Foster keeps saying meow but finally he can’t hold it in any longer and the trooper chastises him: “Do I look like a cat to you, boy? Am I jumping around all nimbly-bimbly from tree to tree?” I always wonder how many cat games has this scene inspired?﻿
﻿
10. Farva: Trooper Rodney "Rod" Farva (Kevin Heffernan) is the group’s blowhard, full of clueless bluster. He is an overweight cop hopelessly incompetent and constantly the butt of everyone’s jokes. He’s currently suspended and relegated to the role of radio dispatcher. 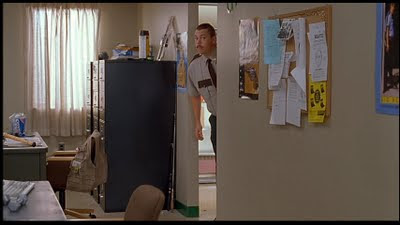 We eventually realize why Farva was suspended later on when he finally gets to go out on patrol only to get into a fight with a burger jockey (Charlie Finn) at a local fast food joint over the trooper’s request for a “liter of cola.” One has to admire Heffernan’s commitment to the role as he is not only handcuffed to a toilet at one point, but also hosed down while naked in another scene, and later on pukes for real. Now, that’s Method acting for ya.﻿﻿﻿
﻿﻿﻿
11. Practical jokes: Ah, the ol’ shaving cream in the locker gag. That one never gets old. 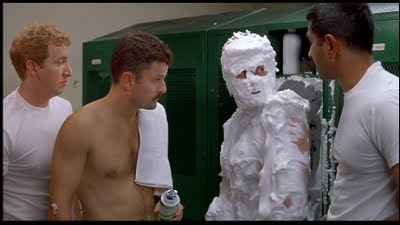 12. A boy named Arlo: In a nice touch, Thorny and his hippie girlfriend named their son Arlo in a sly reference to Arlo Guthrie of Alice’s Restaurant fame. 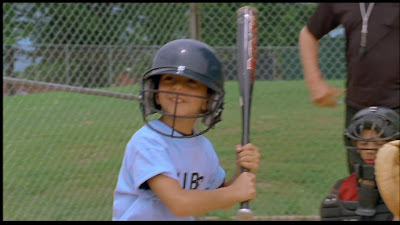 13. Cute female cop: Officer Ursula Hanson (Marisa Coughlan) is a local cop and the only woman who works for them, apparently, and Foster develops a crush on her. Marisa Coughlan has a cute, girl-next-door thing going on but she is hardly just a pretty face. Ursula is more than capable of taking care of herself and is more competent than all of the state troopers put together. Coughlan and Paul Soter have good chemistry together and their characters’ romantic subplot is one of the sweet surprises of Super Troopers. 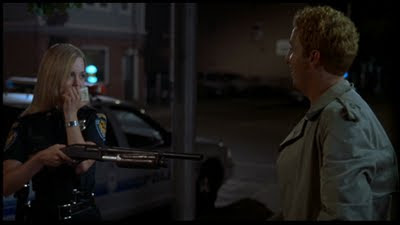 14. Kinky Germans: Thorny and Rabbit pull over a randy German couple who are into all sorts of kinky stuff when they’re not pretending Vermont highways are the Autobahn and listening to generic techno music. They pop up later in the film hooking up with Thorny and his girlfriend, demanding a “mustache ride” from the trooper. Yikes! 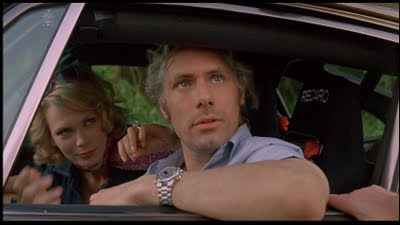 15. The great cola debate: Another memorable bit is when Farva and Thorny go to a burger joint for some food. Right off, the burger jockey behind the register jokes around with the perpetually clueless Farva (“Don’t spit in that cop’s burger.”). The final straw comes when Farva asks for a liter of cola and the burger jockey has no idea what he’s saying. Farva clarifies: “Liter is French for give me some fucking cola before I break both fuckin’ lips!” Eventually, the burger guy sends Farva over the edge and pretty soon he’s leaping over the counter and tackling the guy. Cue gratuitous Farva shower scene. 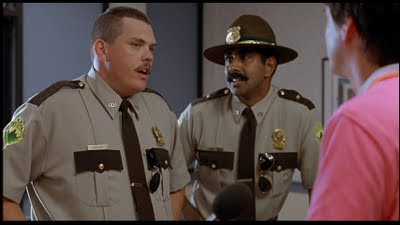 16. Lynda Carter as the Governor: Forget Schwarzenegger; let Wonder Woman take a go as governor. Basically a cameo, Carter lends her considerable charisma to the film and shows just how well she’s aged. I wonder if the Broken Lizard boys grew up watching her in the ‘70s? Like any politician, all she’s concerned about is looking good to the voters. 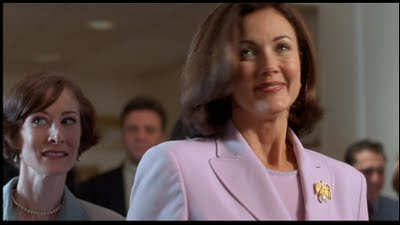 17. Split-screen montage: You don’t see many of these outside of a Brian De Palma film or an episode of 24, but in a comedy?! Bonus points for originality. We see several storylines at once but the one that lingers is Farva projectile vomiting into a toilet while Southern Culture on the Skids blasts over the soundtrack. Nice. 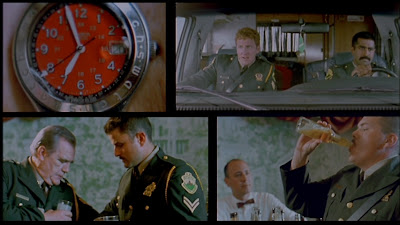 18. The three stoners revisited: In a nice way to wrap things up and bring everything full circle, the troopers bust the three college kids from the beginning of the film – this time at a house part and while undercover. After messing with them (and us as we assume they are no longer cops), the stoners are busted and the end credits shows all the hi-jinks they get up to with our heroes. 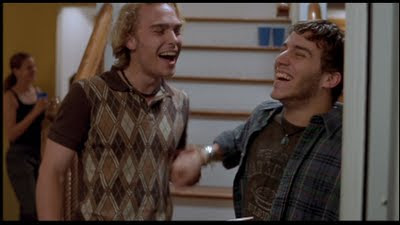 Ever since Super Troopers came out, fans of this funny film have been clamoring for a sequel. Originally, the Broken Lizard boys were thinking of doing a prequel set in the ‘70s which sounds pretty awesome but have since settled on a sequel that is apparently in the works with financing in place. One can only hope that we are subjected to more hilarious misadventures from these wacky Vermont State Troopers in the near future.