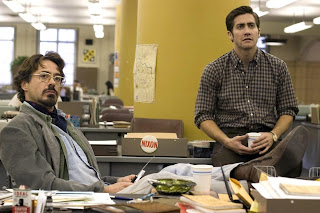 After the technically accomplished but ultimately hollow thriller Panic Room (2002), director David Fincher returned to familiar subject matter with Zodiac (2007), a dramatization of the murders perpetuated by the infamous serial killer known as the Zodiac Killer that terrorized the area in the late 1960s and early 1970s. With Se7en (1995), Fincher seems like an obvious choice to direct this film but those of you expecting a rehash of that film will be disappointed. With Zodiac, he faces the daunting challenge of making an exciting thriller that runs two hours and forty minutes long and where the killer was never caught. He does this by focusing on the people who investigated the case and how it affected them.


Based on Robert Graysmith’s two books on the subject (Zodiac and Zodiac Unmasked), the film focuses on three men who investigated the case and how each one became obsessed with solving it to the point where their lives and those of the ones close to them were affected. Paul Avery (Robert Downey Jr.) is an investigative journalist who covers the story for the San Francisco Chronicle; Robert Graysmith (Jake Gyllenhaal) is a political cartoonist for the same newspaper who takes an interest in the encrypted letters that the killer sends to the police and several newspapers, taunting them; and David Toschi (Mark Ruffalo) is one of the San Francisco police detectives assigned to the case along with his partner Bill Armstrong (Anthony Edwards).

Zodiac begins with the murders and Fincher doesn’t shy away from the brutality of them but doesn’t revel in the gore either. He shows just enough to be disturbing, resisting the urge to glorify it like so many horror films made in the past few years. From there, the focus shifts to Avery and Graysmith – how they got involved in the case and the initial legwork they did before shifting the focus to Toschi and Armstrong who are brought in to investigate the Zodiac’s murder of a taxi cab driver. There is this shift in focus because as the two detectives investigate the case, Avery and Graysmith become marginal figures. They aren’t privy to the kind of access to information available to Toschi and Armstrong. As the years drag on, the trail gets colder and they exhaust all of their possible leads and avenues and have effectively been beaten by the system. They move on to other things and this is where Graysmith picks up the ball and runs with it and the focus changes while Toschi becomes the peripheral character as does Avery who has been beaten by his own addictions and paranoia.

Mark Ruffalo really immerses himself in the role of David Toschi, the man who inspired Steve McQueen’s character in Bullitt (1968) and Clint Eastwood’s Dirty Harry Callahan. The actor adopts a specific voice and a distinctive look that sets him apart from the other characters but not enough to be distracting. It doesn’t hurt that he’s got great material to work with and rises to the challenge of playing a man frustrated by bureaucracy. Ruffalo has only gotten better with every performance and this may be his best one to date. Robert Downey Jr. tones down his sometimes scene-stealing style down so that he isn’t as flashy but delivers a solid performance as a jaded journalist. He gives Avery a certain disheveled charm and over the course of the film he does an excellent job showing the man’s gradual disintegration due to paranoia fueled by alcohol abuse and drugs that take their toll both physically and mentally. Jake Gyllenhaal is good as the eager Graysmith who becomes fascinated by the case and pursues it even when the trail goes cold and it seems like everyone else has lost interest or given up.

Fincher’s films have often been criticized for their lack of characterization and emotional detachment but this is not the case with Zodiac. The actors go a long way in providing an emotional connection to their characters and the director does give us moments in which to make that connection, like several between Toschi and his partner in the form of little exchanges but they all add up and build to the scene where Armstrong tells Toschi that he is transferring to another department. You really feel for Toschi from the disappointed expression on Ruffalo's face. There is also a gradual build-up between Avery and Graysmith. They are introduced together very early on and we see how they interact with one another and then there is a nice scene at a bar where Avery buys Graysmith a drink and they talk about why they are obsessed with the case. It is at this moment that these two characters connect in a meaningful way. These moments make you sympathize with these characters so that you care about what happens to them later on. 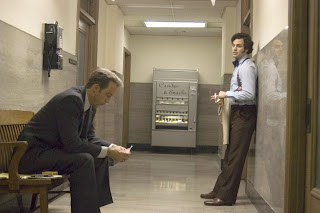 This is a film that shows people talking and doing research – hardly, dynamic, cinematic material but Fincher makes it fascinating with strong performances from his talented cast and a solid screenplay to anchor the film. Like Michael Mann’s equally obsessive serial killer film, Manhunter (1986), Fincher spends a lot of his motion picture showing offices buzzing with activity as the case heats up and we see people hard at work as the police, FBI, the Chronicle and even the CIA all try to decipher the Zodiac’s code and solve the case. He also shows the minutia of their methods while also reminding us of the limits of technology at the time (no personal computers, no Internet, no DNA testing, etc.). These people faced a monumental task of sifting through hundreds of false leads and crank calls from the substantial information that might have actually furthered the case.

As if that wasn’t bad enough, Toschi and his partner are hampered by maddening bureaucracy at every turn. Because several of the murders took place over multiple jurisdictions, they have to consult with the police departments in each one in order to obtain the information that they have. Naturally, some are more cooperative than others. This only slows things down and obstructs the investigation. As the case drags on, we see the hold it has on Avery, Graysmith and Toschi. Both Graysmith and Toschi spend less and less time with their families and Avery is driven to drink and displays increasing erratic behavior, due to his frustration with the case and also because the Zodiac killer contacts him directly, making him understandably paranoid.

Stylistically, Fincher claims that he was influenced by All the President’s Men (1976) and this restrained approach permeates every aspect of Fincher’s film, from the way he frames characters in a scene to the way the Chronicle’s offices are lit to the emphasis on legwork and research conducted by the protagonists in order to catch the killer. The attention to period detail is fantastic and authentic, right down to the fluorescent lights in the aforementioned newspaper office, the cars, the clothes, and the period music that never overwhelms the film or draws attention to itself. It only helps establish the mood of the times and creates the feeling that this film was shot in the 1970s. Fincher shot the entire film digitally on the Thomson Viper (the same camera that Michael Mann most of Collateral and Miami Vice with) but it certainly doesn’t look it. He makes sure that there is nothing stylistically to distract us from the riveting content and strong performances. 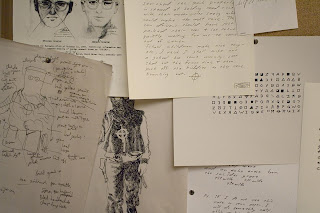 Zodiac presents a wealth of information and invites you to sift through it like the three protagonists. In fact, there is so much to absorb that repeated viewings only reveal more details that might not have been caught upon an initial viewing. The film’s long running time (two hours and 40 minutes) allows you to gradually immerse yourself in the film and the story it tells. However, it never feels too long because Fincher maintains a brisk, efficient pace cramming as much detail and information as he can into every scene. The killer is a fascinating enigma and his encrypted letters, his blatant taunting of the police, and the discrepancies between murders only it makes it more interesting. It is easy to see why people became obsessed with this case. Ultimately, the Zodiac case doesn’t just leave a trail of actual bodies but also collateral damage in the form of failed marriages, ended partnerships, and substance abuse. And this is just the people who investigated the case. The toll taken on the victims who survived, their families and those of the people who were killed is inconceivable. A whole other movie could be made about them. Fincher has made a smart, engaging thriller that suggests a new direction for the filmmaker, one that places an emphasis on character and story instead of atmosphere and set design.
at April 07, 2008