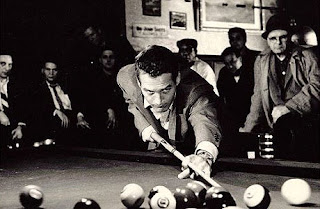 Legendary actor Paul Newman died on Friday after a long battle with cancer. He leaves behind a very impressive legacy that includes a diverse body of work. Newman had movie star good looks but wasn’t afraid to play complex, sometimes unlikable characters. Instead of providing an overview of his great career I thought I would talk about two films of his that stand out in my mind as prime examples of his remarkable range as an actor.

The Hustler (1961) is a significant milestone in Newman’s career. It not only launched him into the Hollywood stratosphere but also marked the beginning of an incredible run in the 1960s, with films like Hud (1963), Cool Hand Luke (1967), and Butch Cassidy and the Sundance Kid (1969). Newman became a movie star but acted like a character actor, creating one memorable character after another. Arguably, The Hustler is where he really came into his own, delivering a powerful performance as small-time pool hustler Fast Eddie Felson.

The Hustler is not so much about the game of straight pool as it is about the meteoric rise and fall of Fast Eddie. The prologue introduces him and his partner Charlie (Myron McCormick) as they hustle a bar with a handful of customers (including a young Vincent Gardenia as the bartender). Fast Eddie knows how to act like he’s an erratic pool player even feigning being drunk. But when it counts and when other people’s money is on the line, he makes the crucial shot to win it all. Fast Eddie’s goal is to play and beat the best pool player there is: Minnesota Fats (Jackie Gleason). Fast Eddie is young, cocky and full of life but he meets his match with Fats who wears him down over 36 hours straight of pool, defeating him financially, physically, and, most importantly, spiritually. Fats breaks Fast Eddie who now has to figure out how to pick up the pieces.

Paul Newman plays Fast Eddie with youthful exuberance. He is young, good-looking and plays a mean game of pool. Fast Eddie’s got the world by the tail, that is, until Fats beats him and he then stupidly (and arrogantly) hustles the wrong guys, getting his thumbs broken in the process. Over a short amount of time Fast Eddie ages emotionally, changing into a bitter, angry man. Newman does a great job of conveying this transformation as Fast Eddie begins to resemble one of the world-weary characters in Jack Kerouac’s Beat novels.

Fast Eddie’s salvation, in a weird sort of way, lies with a woman he meets at a bus terminal. Like Fast Eddie, Sarah Packard (Piper Laurie) has been chewed up and spit out by life. She’s an alcoholic but seems to have more deep routed problems and Piper Laurie subtly hints at them. She plays Sarah like a classy barfly, although, she says that she’s an ex-actress turned college student. Sarah and Fast Eddie are drawn to each other because they are both marginalized figures. They recognize the damaged qualities in each other.

The Hustler went on to become a critical and commercial hit. It was nominated for nine Academy Awards and won for its cinematography and art direction. Many years later, Newman would revisit Fast Eddie in The Color of Money (1986) co-starring Tom Cruise and directed by Martin Scorsese. The Hustler flies in the face of traditional 9-to-5 suburban living by presenting characters who live on the fringes and who refuse to conform. They are deeply flawed and this is what makes them so compelling to watch. They are capable of being so cruel to each other and the film explores the origins of this behavior. Director Robert Rossen doesn’t judge the characters and instead leaves that up to the audience. Ultimately, the film is about winning and losing in America and the toll it takes on an individual as represented so powerful by Newman. 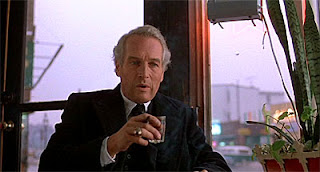 The Verdict (1982) came along at just the right time in Newman’s career. He hadn’t had a hit film in some time or a role that really challenged him (Absence of Malice being a notable exception). This would all change when he signed onto this troubled production. Based on the book of the same name by Boston malpractice lawyer Barry Reed, The Verdict was adapted for the screen by David Mamet and to be directed by Arthur Hiller. However, Hiller left due to “creative differences” and Jay Presson Allen was brought in to rewrite the script. She eventually left for the same reasons Hiller did and James Bridges came aboard to write and direct with Robert Redford starring. They couldn’t agree on certain story points and the project stalled. Newman and Sidney Lumet were hired and decided to go back to Mamet’s script.

Frank Galvin is an alcoholic lawyer who scans the obituaries for potential clients. He hasn’t won a case in ages, losing four of them in three years, and his office, like his life, are in shambles. It’s located in an old building where the elevator doesn’t even work. His friend, Mickey Morrissey (Jack Warden) throws him a case that is a guaranteed moneymaker. Its two weeks away and Galvin hasn’t even read the file or met the client.

A pregnant woman goes into a hospital to deliver her third child. She is given the wrong anesthetic and lapses into a coma that kills the child. It leaves the woman brain dead with zero chance of recovery. Galvin figures that the case won’t go to trial and that the Archdiocese, who owns the hospital, will settle out of court. That would suit him just fine as he’s been reduced to an ambulance chaser deathly afraid of going to court. He talks to a doctor who’s willing to testify and figures the case is a slam dunk. Then, something happens to him: he visits the comatose woman and realizes that the offer the Archdiocese gave him isn’t enough, not by a long shot. This woman deserves justice. Someone needs to pay for what happened to her. Galvin feels compelled to stand up for her rights and decides, against his better judgment, to go to court, facing off against Ed Concannon (James Mason), a real shark who has infinite resources at his disposal and is not afraid to use them (and any other means) to win the case. Frank, on the other hand, only has Mickey. 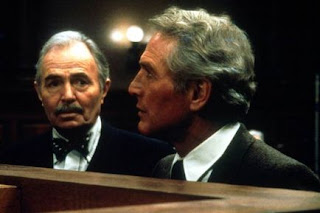 Paul Newman is excellent as the alcoholic attorney who develops a conscience and is determined to win his case despite the odds. Even though his character is a lush, Newman doesn’t resort to the usual drunk stereotype or showy theatrics. Galvin is the kind of alcoholic that needs a drink to steady his hand and calm his nerves. Newman plays a flawed character but with noble intentions and his story is one of redemption, the underdog against the system as it were. James Mason is the ideal opponent for Newman. He’s got the Hollywood pedigree that is comparable to Newman’s and brings a rock solid gravitas to the role. There’s a scene where his character is coaching one of the witnesses and it is incredible to watch how he manipulates the poor man. Mason’s character has an air of supreme smug confidence that makes you want to see Newman win, if only to wipe that superior expression right off his face.

I think that one of the reasons Newman resonates so much with me is that he reminds a lot of my grandfather. They came from the same generation and shared a lot of the same values. In a weird way, watching Newman was almost like watching my grandpa. Paul Newman was an original and he will be greatly missed.

As you would imagine, the tributes to Newman have been flooding in. Here are three of my faves: Manohla Dargis in the New York Times, a nice collection of clips from YouTube, and a tribute written by Shawn Levy, who has completed a book on the actor that should be out soon.