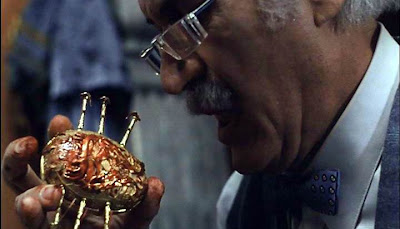 Cronos (1993) marked the auspicious feature film debut of Mexican filmmaker Guillermo del Toro and introduced the world to his unique worldview that fused his love of dark fairy tales with the macabre. The film was the culmination of Del Toro cutting his teeth on short monster movies where he learned how to do special effects and makeup effects himself. The film dominated Mexico’s equivalent of the Academy Awards and won the critics’ award at the Cannes Film Festival. Unfortunately Del Toro’s film was a commercial failure at the box office despite positive notices from The New York Times, the Los Angeles Times and the Chicago Sun-Times. However, it was a launching pad, career-wise, for Del Toro who went on to make Mimic (1997) for Miramax, which was plagued with studio meddling, and the popular Hellboy films among many others.


Created in 1536, the Cronos Device is said to be the key to immortality. It attaches itself to the bearer and drains blood from them in return for eternal life – they become a vampire of sorts. For hundreds of years the scarab-looking device was in the possession of its architect. When he died it came into the possession of a kind, old antiques store owner by the name of Jesus Gris (Federico Luppi). An American businessman named Angel de la Guardia (Ron Perlman) has been looking for the device as his benefactor desires to become immortal. Of course, Gris messes with the device and is unable to resist its lure. He soon finds himself craving raw meat and blood – even going so far as to lick a small pool of it off a public bathroom floor! He also looks younger and not only has to worry about being taken over by the device but also has to watch out for Angel.

There is a wicked streak of dark humour that runs through Cronos reminiscent of the early films of Stuart Gordon or Roman Polanski and is not as prevalent in Del Toro’s more serious films, like The Devil’s Backbone (2001) and Pan’s Labyrinth (2006), but surfaces in his more commercial work, like the Hellboy films. Cronos would mark the first time that he would work with actor Ron Perlman and he is quite good as a ruthless but somewhat inept businessman. They have gone on to collaborate on several subsequent films together with the actor serving as the director’s cinematic alter ego.

Cronos is one of the more subtle vampire films as Del Toro doesn’t show blatant vampire iconography until well into the film. At this stage in his career, he was still working out his themes and still deciding what his trademark motifs were to be. The narrative beats are different from his later films but in a good way. Del Toro makes fairy tales for adults and Cronos is a parable for several things, chief among them be careful what you wish for because you might just get it and it won’t be everything you thought it’d be. Not to mention achieving comes at an awful price as if Del Toro is saying that we are architects of our destruction.

There is an audio commentary by writer/director Guillermo del Toro. He explains that one of the primary inspirations for the film was alchemy, which he talks about in some detail. The filmmaker touches upon the colour scheme and why he used the ones that he did. Del Toro says that he wanted to create layers of vampirism – political, religious, and economic, etc. He also speaks knowledgably about filmmaking, history, mythology, literature and how they inform Cronos.

Also included is a commentary by producers Arthur H. Gorson, Bertha Navarro and Alejandro Springall. They provide a much more nuts and bolts approach – i.e. how they raised the money for the budget so that it would be independent of the studios thereby giving Del Toro total creative freedom. They also point out the themes in Cronos that he would continue to explore in subsequent films. 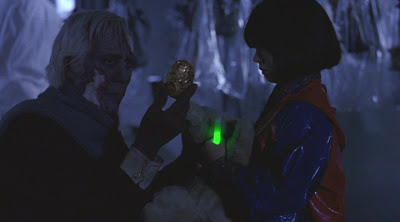 “Geometria” is a short horror film Del Toro made in 1987. A teenager is supposed to be studying for a geometry test but is more interested in the occult. He summons a demon and all hell breaks loose. In his introduction, Del Toro calls the film a silly idea and talks about how he was influenced by Italian horror filmmakers like Mario Bava, Lucio Fulci and Dario Argento.

“Welcome to Bleak House” features Del Toro taking us on a tour of his fascinating “man cave,” a house full of props and artifacts from his films as well as toys and books that he’s collected over the years. He has organized the house in a series of libraries. This is a film genre fan’s dream and one could easily spend hours exploring its rooms.

There is an interview with Guillermo del Toro. He sees Cronos as very important because it was where he first articulated his universe. He discusses some of the themes this film explores and how they resurface in later films. Del Toro talks about his intentions with this film as well.

Del Toro’s long-time cinematographer Guillermo Navarro is interviewed and recalls when he first started working with the director. He also touches upon when Del Toro approached him about making Cronos. Naturally, Navarro talks about his approach to the visuals.

There is an interview with actor Ron Perlman. He talks about how he got involved in the film. Del Toro sent him a fan letter and a copy of the screenplay, both of which impressed him. Perlman tells some funny stories about working on Cronos and with Del Toro.

Federico Luppi talks about working with Del Toro on Cronos. He speaks admiringly of the filmmaker while we see clips from the film and behind-the-scenes footage, including all sorts of makeup and gore effects being applied to the veteran actor.

There is an impressive stills galley featuring rare photographs and illustrations with captions written by Del Toro identifying them.

Finally, there is a trailer.