DVD of the Week: Drive Angry 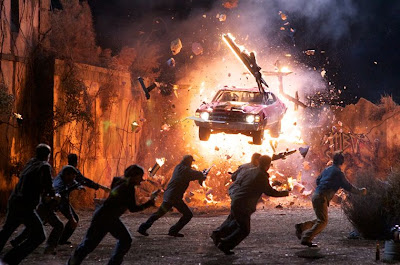 Continuing his string of paycheck movies, Drive Angry (2011) is actually closer to the gonzo Nicolas Cage of old than the diluted actor we’ve come to expect in films like Next (2007) and Knowing (2009). With Drive Angry, he’s made a full-on, balls-out cult film that flopped spectacularly at the box office and was trashed by the critics. It has all the necessary ingredients of cult status: loads of ultra violence, nudity, lots of cussing, and all kinds of character actors chewing up the scenery. The film is the brainchild of Patrick Lussier and Todd Farmer, the former a B-horror director responsible for efforts like Dracula III: Legacy (2005) and My Bloody Valentine 3D (2009). While the latter film was an unnecessary remake of the 1980’s Canadian slasher film of the same name, it did hint at the garish excesses Lussier was capable of and has finally delivered with Drive Angry.


The film begins with John Milton (Nicolas Cage) literally escaping from hell in a badass muscle car. He is trying to avenge his daughter’s murder and rescue her kidnapped baby from Jonah King (Billy Burke), the sadistic leader of a satanic cult. In the first five minutes, Milton totals a pick-up truck with three flunkies in a way that is so gloriously and stylishly over-the-top that it would make Robert Rodriguez green with envy. While his film, Machete (2010), paid homage to exploitation films, Drive Angry is one, only with A-list talent. Milton crosses paths with Piper (Amber Heard), a tough ex-waitress who has recently broken up with her deadbeat boyfriend (Todd Farmer in a cameo). Hot on their trail is a man known only as the Accountant (William Fichtner), a dapper minion from Hell come to bring Milton back.

Inspired by another cartoonish action film, Shoot ‘Em Up (2007), Drive Angry also features a gun battle while the protagonist is having sex only captured in slow motion and cheekily scored to “You Want the Candy” by the Raveonettes. While excessively violent and gory, the action sequences are all so overtly stylish that they can’t be taken too seriously. This film is akin to a blood-drenched, R-rated cartoon. The violence isn’t cruel and mean-spirited like in a torture porn horror film, but rather gleefully petulant like the guys who orchestrated all of this mayhem grew up reading Fangoria in the ‘80s.

Surrounded by all of this garish style and crazed violence, Nicolas Cage wisely underplays his role, going for the calm, collected man of action. He’s matched up perfectly with the always watchable William Fichtner who seems to be channeling Christopher Walken with his wonderfully eccentric performance. He looks to be having an absolute blast with this role and steals every scene he’s in with his unfailingly polite yet very lethal character. Billy Burke is suitably sinister as a religious fanatic and the beautiful Amber Heard holds her own as a two-fisted, curse-like-a-sailor sidekick to Cage’s undead avenger. David Morse even shows up using his considerable skill as an actor to make a chunk of exposition dialogue palatable. 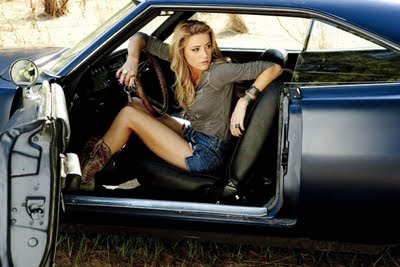 Drive Angry has everything you could want from a trashy action film: cool muscle cars, over-the-top shoot-outs, larger than life baddies, and a cool good guy with a mission. All of this is handled ably by Lussier in what is easily his most accomplished film to date. He gleefully sticks a middle finger in the face of political correctness with a film that is more entertaining than it had any right to be. Cage needs to do more films like this and Bad Lieutenant: Port of Call New Orleans (2009), which harken back to the eccentric characters he played early on in his career.

There is an audio commentary by director Patrick Lussier and co-screenwriter Todd Farmer. Lussier jokingly refers to Drive Angry as his “subtle, gentle road movie,” and battles through a bad case of laryngitis, which makes it difficult, at times, to understand what he’s trying to say. But he soldiers on with Farmer as they talk about how the film was made. The two men tell all kinds of filming anecdotes as they talk us through filming. Lussier points out that Clint Eastwood’s protagonist in High Plains Drifter (1973) was the model for Cage’s character. They give shout-outs to various crew members’ contributions on this solid track.

“How To: Drive Angry” is one of the better promotional featurettes. Amazingly, the studio gave the filmmakers the creative freedom to do a hard R-rated supernatural action film. They talk about shooting in 3D as opposed to converting it in post-production. The filmmakers also talk about working with a modest budget and solving certain problems creatively as opposed to throwing a lot of money at it a la Michael Bay. It’s nice to see that many of the stunts in the film were done practically. 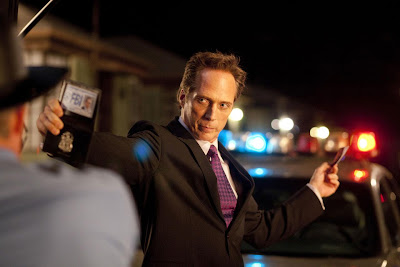 “Milton’s Mayhem” is an amusing extra that compiles all of Milton’s action sequences and attributes a point system to every punch and gunshot like something out of a video game.

Finally, there are two deleted scenes with optional commentary by Lussier and Farmer. We see a little more with Piper and her boyfriend and another scene with the Accountant that were both rightly cut.