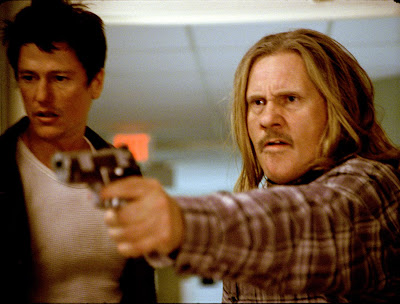 The SyFy Channel original movies that air on Saturday nights are the drive-in B-movies for the New Millennium, proudly flying the exploitation freak flag with a steady diet of the kind of pseudo-solemn disaster movies that were all the rage in the 1990s, cheesy fantasy films and over-the-top monster movies. These often cheese-tastic fare are populated by unknown up-and-comers, actors that once had their time in the spotlight either on television, film or popular music but are now just trying to keep working, and genre character actors. The result is colorful assortment of movies like Never Cry Werewolf (2008), Malibu Shark Attack (2009), and Dinocroc vs. Supergator (2010). Admittedly, most SyFy Channel movies are forgettable exercises in cheap special effects, laughably bad dialogue and wooden performances (that is kinda their charm) but every so often the channel cranks out one that is better than you would normally expect. Larva (2005) is one of those movies – a fun romp that Vulcan mind melds David Cronenberg-esque body horror with The Blob-style creature feature.


The film’s rather dark yet playful sense of humor is apparent right from the start as two kids’ late night bull-tipping session in an attempt to impress a couple of girls leads to the first accidental discovery of a species of fluke-like parasites. Dr. Eli Rudkus (Vincent Ventresca) is the new veterinarian in the small town of Host, having replaced the old one who mysteriously retired. His first house call is to the farm of Jacob Young (William Forsythe) who has a sick cow and casually meets Eli at the front door with a loaded shotgun. He soon gets Jacob’s grudging respect after witnessing how the doctor deals with his sick animal. According to the rancher, his cattle eat feed supplied for free by Tender Meats and in turn they supply the corporation with meat from their farms.

While studying the parasites, Eli discovers that they absorb blood which causes them to grow in size and transform into lethal bat-like creatures. He attends a Tender Meats fundraiser hosted by the glad-handing president Fletcher Odermatt (David Selby) whose new feed and the meat it produces may not exactly be legal. He’s also not too thrilled to meet Eli without having been told about his arrival beforehand. Eli also meets Tender Meats beautiful, no-nonsense corporate lawyer Hayley Anderson (Rachel Hunter) whom he takes an instant shine to but she remains aloof. 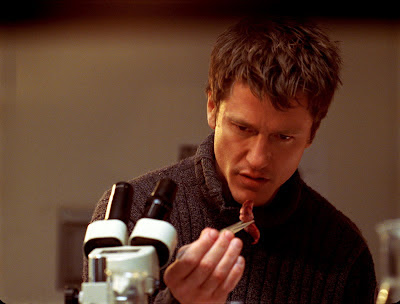 After efficiently introducing all the major characters, the film picks up narrative steam when one of the townsfolk is attacked by the aggressive parasites causing him a heart attack. The understandably concerned Eli investigates further and wouldn’t you know it, there’s something wrong with the feed supplied by Tender Meats. This puts him in direct conflict with Fletcher who tries to discredit the young vet at a town hall meeting. Once Eli and Jacob team up to kill a parasite let loose in the local hospital, Larva becomes an exciting buddy action movie of sorts as the latter supplies the firepower while the former supplies the brainpower. It is a lot of fun to watch these guys bounce off each other with Eli as the reluctant action hero and Jacob as the dry-witted tough guy. The hospital cat and mouse chase is nicely staged with plenty of suspense (thanks to moody cinematography), action and the requisite jolts as Eli and Jacob search the bowels of the building for the parasite, discovering a trail of bodies in its wake.

In keeping with SyFy Channel movie tradition, Larva is populated by lesser known T.V. actors (Ventresca), B-movie character actors (Forsythe and Selby) and an ex-supermodel turned actress (Hunter) who all acquit themselves quite well considering the pulpy subject matter. In particular, Vincent Ventresca and William Forsythe play well off each other with the former as a mild-mannered doctor who springs into action once the nasty parasite threat becomes prominent and the latter with his gravelly voice, badass attitude and a secret stash of weapons that would make Charlton Heston proud. Forsythe plays a gruff yet sympathetic farmer and it is great to see the underrated actor, known for playing heavies, in a rare heroic role yet still giving it his trademark grizzled spin. Ventresca, known mostly for playing Fun Bobby on the Friends sitcom and starring in the short-lived The Invisible Man series, is good as the honest vet who that decides to blow the whistle on Tender Meats once he realizes what’s going on. The journeyman actor comes across as instantly sympathetic and it’s hard not to root for his character.

The great David Selby (Dark Shadows) sinks his teeth into a juicy villain role as the venal Fletcher. He even gets a funny dinner scene where he utters weird monster sounds to amuse his son in a moment that feels like it was an improvised bit. It doesn’t have anything to do with the story but Selby is able to humanize Fletcher a little bit. His character mostly cares about the almighty buck and his comeuppance is quite satisfying. Rachel Hunter is just fine in an under-written role as a hot shot lawyer that eventually teams up with Eli and Jacob. Hayley isn’t some cliché damsel in distress but gets to mix it up with the boys and even kick a little ass. 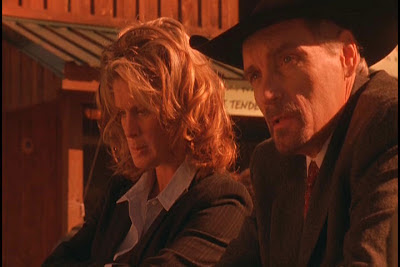 Larva is a not-too thinly-veiled commentary on corporate greed at the expense of domestic farmers. In order to compete with foreign exports and eke out a living they get into bed with greedy corporations like Tender Meats. Their tinkering with genetically altered meat ends up biting them in their corporate asses as the dangerous parasites begin decimating the small town, refusing to discriminate as women and children are readily dispatched. Basically, Larva is a wish fulfillment revenge tale as the arrogant corporation gets its well-deserved karmic payback. For a low-budget horror movie it has pretty decent production values, solid direction by Tim Cox, and an enticing premise that is well-executed by a cast refusing to simply phone it in as is sometimes the case with these films. When you’re dealing with a movie like this one, it is important that your lead actors have good chemistry. It is a bit of a gamble casting two very different actors together and then team them up with an ex-supermodel but the filmmakers pull it off by creating an engaging horror movie that hits all the usual narrative beats but does so in entertaining fashion. It may be familiar ground well-traveled but so long as it is done well, who cares? Larva is a dark comedy but one that never winks knowingly at the audience, instead opting to play it straight and deliver the epitome of a guilty pleasure.