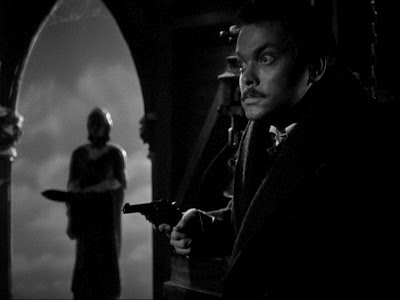 The Stranger (1946) is generally regarded by Orson Welles aficionados as a standard thriller done for money, and to prove to studio executives that he could work within the system (it had been four years since his last directorial effort). He even said as much in interviews, and criticized the studio for cutting approximately thirty minutes from the beginning of the film that he wrote himself. Admittedly, it is not in the same league as, say, Touch of Evil (1958), but the film does have its merits. The Stranger is a tightly plotted and well acted thriller that bears his unique stamp, in spite of it being a director-for-hire project.

An investigator named Wilson (Edward G. Robinson) releases Konrad Meinike (Konstantin Shayne) — a convicted Nazi war criminal — from prison, hoping that he will lead him to an even bigger fugitive, the notorious Franz Kindler (Orson Welles). Sure enough, Meinike finds Kindler posing as Charles Rankin, a history teacher in the idyllic small town of Harper, Connecticut. There is a certain delicious irony that a notorious Nazi war criminal is not only teaching world history to America’s privileged elite, but that he is also marrying the daughter (Loretta Young) of a Supreme Court judge (Philip Merivale). The film plays out as an entertaining cat and mouse game with Wilson applying pressure on Kindler to reveal his true identity.

Many Welles supporters complain that The Stranger lacks the overt stylistic flourishes of his more celebrated efforts, such as The Lady from Shanghai (1947) and Othello (1952). While it is true that his trademark style is more restrained in The Stranger, it is still recognizable as a Welles film. For example, the opening sequence — where Meinike is released from prison — features the use of German Expressionistic lighting (in particular, the use of silhouettes) that Welles used so effectively in Citizen Kane (1941). These first six minutes, with its political intrigue and foreign setting feels like an entirely different film from the rest of what follows. The shadowy noir world of this opener acts in sharp contrast to the bright, postcard-perfect setting of Harper where Kindler has taken refuge. These two worlds are bridged by Wilson’s dogged pursuit of Meinike.

After he and Wilson arrive in Connecticut, Welles uses a swooping high angle establishing shot to give a God’s eye view that anticipates a similar shot at the beginning of Touch of Evil (both films were shot by Russell Metty). Welles also utilizes low angle shots (used so effectively in Kane) in a school gymnasium when Meinike gets the upper hand on Wilson. It is during this scene that Welles inserts an amusing visual gag. After Wilson is knocked unconscious with some gym apparatus, Meinike walks past a sign that reads, “Anyone using apparatus in this room does so at their own risk.” Ah, if only Wilson had seen this earlier! Welles’ love of long takes is also evident in The Stranger during a brilliantly staged four-minute scene between Meinike and Kindler in the woods. It’s a dialogue-heavy scene that also features sounds of a paper chase occurring off in the background. This leads into one of the best sequences of the film, in which Kindler frantically covers up a dead body in the woods, while several of his students are participating in a paper chase nearby. The use of dramatic music and Welles’ panicked, paranoid facial expressions create palpable tension in this scene as the teacher is almost caught by his pupils. The fact that Welles pulled off this cheekily audacious sequence proves that he wasn’t content to merely sleepwalk his way through filming but instill some of his personal style when he could.

Welles is not only able to wring tension out of action sequences but also through dialogue-driven scenes as well. At one point during the film, Wilson and Kindler meet face to face over a family dinner. Kindler delivers a chilling monologue that starts off cordially and then, as he lets the façade slip ever so slightly, he expounds on Germany and the Nazi philosophy. He claims that the Germans are not waiting for another Messiah a la Jesus but rather another Hitler. It is a powerful speech delivered with zeal by Welles (who relished playing villains) that anticipates his famous monologue in The Third Man (1949). The looks that Welles and Robinson exchange during this scene make it clear that the two men have no illusions about who they really are — but proper dinner decorum keeps them in check during the meal. It is what is not being said that is just as telling as what is being said.

Story-wise, The Stranger lacks originality. It is essentially a reworking of Alfred Hitchcock’s Shadow of a Doubt (1943), with Uncle Charlie being substituted by Franz Kindler. Both films are set in postcard perfect small-town America, feature the villain launching into a psychotic monologue while sitting at a family dinner table, and climax with a dramatic scene atop a bell tower. Edward G. Robinson also seems to be channeling his cranky investigator from Double Indemnity (1944) and in doing so instills a methodical intelligence in his stereotypical character. He also has a nice scene with Billy House who plays Potter the local drugstore clerk. The two men play a game of checkers with Potter inquiring about Wilson’s business in town while the investigator poses as an antiques dealer. During the course of their game, Wilson attempts to get some information out of the clerk about Meinike only to then lose the game much to his chagrin. Robinson’s frustrated expression at being bested by a country bumpkin is priceless.

After Orson Welles’ deal with RKO fell through, he took the first offer to direct a film, which was The Stranger. He took the gig to prove to Hollywood that he could make a commercial picture on time and on budget. The screenplay was written by Anthony Veiller with uncredited contributions by filmmaker John Huston and Welles himself. His major contribution to the film was an elaborate chase between Wilson and Meinike as he tried to locate Kindler in Argentina complete with a “whole series of very wild, dreamlike events,” according to the director. Producer Sam Spiegel ordered the film’s editor to cut this sequence, which amounted to almost thirty minutes of footage because he felt that it did not advance the story. 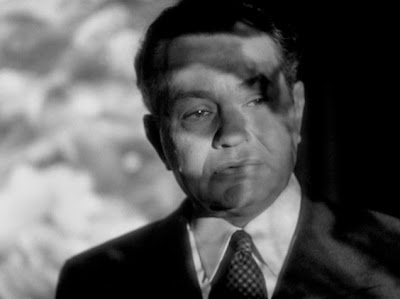 Welles completed The Stranger under budget and on time. It was released in May of 1946 and performed quite well at the box office, earning an Academy Award nomination for, ironically, Best Original Story. More importantly, it proved to Hollywood that Welles was a bankable director, and paved the way for his next film, The Lady from Shanghai. Even though Welles disowned The Stranger, it still contains enough of his personal touches and pre-occupations to elevate it above the generic thriller, to a film that belongs alongside his other artistic successes.


NOTE: A slightly shorter version of this article first appeared on the Senses of Cinema website.