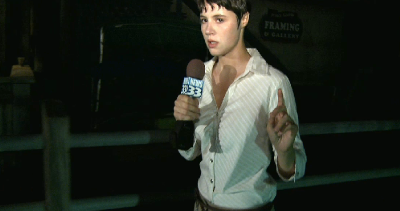 Oren Peli has a lot to answer for. With Paranormal Activity (2007), he brought the found-footage horror film back into the mainstream much in the same way The Blair Witch Project (1999) did years before. He hasn’t looked back since, producing a slew of like-minded projects of varying degrees of quality. For better or for worse he’s responsible for an overabundance of found-footage horror films, which begs the question, has this sub-genre played itself out? There are signs that point to this being the case, like the Peli-produced found-footage horror television show The River, which was cancelled after only one season.

Along comes The Bay (2012), an ecological-themed horror film that features a lethal mutant breed of the parasite Cymothoa exigua wreaking havoc in Claridge, a seaside Chesapeake Bay town. Directed by BarryLevinson of all people, it invokes Steven Soderbergh’s like-minded disaster film Contagion (2011), but whereas the latter filmmaker never fully embraced the horror genre, the former embraces it in a chillingly effective way. Like Soderbergh, Levinson has dabbled in all kinds of genres, from comedy (Diner) to biopic (Bugsy) to science fiction (Sphere), and now he tackles horror with The Bay.

On July 4, 2009, the town of Claridge was ravaged by disaster that was quickly suppressed by the government. Three years later, Donna Thompson (Kether Donohue), a college student who was there when it all went down, has pieced together digital footage from various sources, thanks to a WikiLeaks-type website and narrates her experience over what we are watching. At the time, she was doing a story on the holiday festivities, working as an intern for a local T.V. station. Levinson does a nice job of juxtaposing the naïve and inexperienced Donna in 2009 with the haunted version of her in the present. It is a sobering reminder of how the horrible events of that day changed her life forever.

It all started several days earlier with two oceanographers that died mysteriously in the water. The autopsy footage looks like something burst out of their bodies. The official statement by authorities is that they died from a shark attack but it’s pretty obvious that something else killed these people. On July 4, people all over town start vomiting and experiencing outbreaks of boils, blisters and lesions on their bodies. There is a chilling shot of a woman covered in lesions walking around a crowded area pleading for help. Another unsettling scene involves two cops in a patrol car discovering a dead body lying on a front lawn in an otherwise typical tree-lined suburb.

As with these kinds of viral outbreak films, the epidemic starts off gradually with a few incidents and then quickly spreads. Soon, the hospitals are overcrowded, law enforcement is overwhelmed and social order eventually breaks down. Much like George Romero’s Diary of the Dead (2007), The Bay tells its story through a collage of footage taken from a variety of sources: cell phones, research footage, news coverage, and even the camera inside a police squad car. 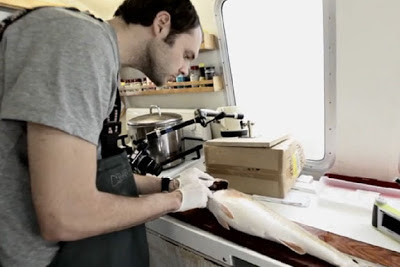 Much like Romero, Levinson mistrusts authority: the mayor (Frank Deal) knew about the threat early on but failed to do anything about it, the Centers for Disease Control is too slow to react and the police initially view the first few deaths as murder cases. The big problem is lack of communication as these various groups either don’t share crucial information or are too slow in doing so. Not surprisingly, the government doesn’t react fast enough because of the byzantine bureaucracy inherent in the system. The initial incident report gets shuffled from agency to agency because no one is willing to take responsibility. As a result, thousands of people die in a situation that could’ve been avoided.

The horror comes in the form of seeing everyday townsfolk being ravaged by these aggressive parasites. As is the case with most found-footage horror films, we don’t really get to know these people but the fact that they look like you or I gives the situation an unsettling authenticity. Levinson has a real knack for bringing out the dread in simple shots, like a scene where Donna is shooting a spot on the now desolate fairgrounds and we hear anguished screams off in the distance. They sound slightly inhuman, almost liked wounded animals begging to be put out of their miseries. Another haunting image is a shot of the town’s main street at night littered with dead bodies. These images linger and it is almost a relief when the film finally ends and we are spared any more scenes of carnage.

Barry Levinson was originally asked to direct a documentary about environmental crises in the Chesapeake Bay. After he watched a 2009 episode of the PBS show Frontline on the topic, he realized that what they had done couldn’t be improved on. However, the information he discovered while doing research was so frightening that he felt the subject would be better served as a fictional film instead. The mutant parasites in The Bay were based on research Levinson and the film’s screenwriter Michael Wallach did on isopods, crustaceans that live on land and water. In fact, many of the isopods in the film are real with very little CGI trickery involved.

The Bay was shot in South Carolina over 18 days for approximately $2 million with a cast of unknown actors and utilizing over 20 camera types, like Skype, and iPhones. He avoided using high-end digital cameras because the footage looked too slick and in order to achieve the realistic look he wanted, Levinson opted to use consumer grade cameras. The director decided to go the found-footage route because he felt that with “all the technology, all the cellphones, we have an idea of how people would behave when faced with imminent danger. All this footage out there right now in my opinion will become archeological. Maybe even anthropological.”

The Bay was shown at several film festivals, including the Toronto International Film Festival and the New York Film Festival to positive audience reaction but Levinson was disappointed at how the film’s distributor handed its general release. He felt that they “didn’t really care about the movie, because it’s not a 100 percent horror film; it doesn’t fit the Saw mold. But I keep saying that that doesn’t mean there can’t be an audience.” 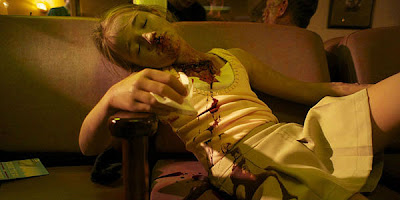 While the premise of The Bay is hardly original – it is basically a found-footage version of the little-known SyFy movie Larva (2005) but re-imagines it as a mockumentary. This approach gives the film an urgency and intensity as Levinson takes us through a nightmarish day of this beleaguered town, splicing in the occasional clips of events that occurred days and weeks before, offering up tantalizing hints of what started it all. Give credit to a filmmaker of his stature for eschewing a studio film populated with recognizable movie stars in favor of a low-budget, no frills horror film. The Bay is the latest in a recent trend of environmental apocalypse movies (see The Last Winter, The Happening, etc.) that act as a metaphoric warning for how we are destroying the planet through pollution, waste and many other methods. The Bay is a found-footage horror film with more on its mind than just scaring its audience as Levinson criticizes companies that destroy the environment in order to make a profit and how the government fails to react fast enough to disasters.