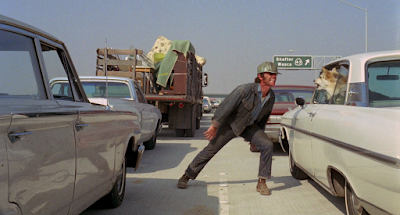 Jack Nicholson had one of the best runs of any actor during the 1970s and that’s saying a lot when you consider it was at a time when the likes of Robert De Niro, Gene Hackman and Al Pacino, among others, were doing some of their very best work. Nicholson actually made a big splash with his scene-stealing supporting role in Easy Rider (1969), which kickstarted a fantastic run of films, beginning with Five Easy Pieces (1970) and continuing with notable efforts like The King of Marvin Gardens (1972), The Last Detail (1973), and Chinatown (1974) – and this is before the halfway point of the decade! Perhaps his most fruitful collaborator during this period was filmmaker Bob Rafelson whom he co-wrote The Monkees movie Head (1968) with and went on to direct Nicholson in Five Easy Pieces and The King of Marvin Gardens. Five Easy Pieces is one of those complex character studies that typified some of the best American films from the ‘70s.

We meet Bobby Dupea (Jack Nicholson) working on an oil field somewhere in California to the strains of “Stand by Your Man” By Tammy Wynette, which, in retrospect, seems ironic because he could care less about his girlfriend’s loyalty. It is playing on a record player when he comes home and Nicholson gives it a brief look of disdain. When Bobby rebuffs his girlfriend Rayette’s (Karen Black) suggestion to play the song again she tells him to play the B-side, he snarkily replies, as only Nicholson can, “It’s not a question of sides, it’s a question of musical integrity.” The last bit is delivered with the actor’s trademark shit-eating grin. It seems like Ray doesn’t exactly understand what he means but does know that he’s making a joke at her expense.

Bobby and Ray go bowling with his co-worker Elton (Billy “Green” Bush) and his wife Stoney (Fannie Flagg) and then proceeds to belittle her in front of them for her lack of athletic prowess. He’s cruel to Ray and looks down on her, which begs the question, why is he with her and why does she put up with him? Bobby is someone who doesn’t suffer fools gladly, which makes one wonder why he lives with Ray, a nice enough person but clearly not his intellectual equal. He barely tolerates her needy behavior and one gets the feeling that he is punishing himself. The early scenes of Bobby and Elton working on the oil fields are beautifully realized as we actually see these guys hard at work and then joking with each other during breaks. These moments have a naturalistic vibe as Nicholson and Billy “Green” Bush play so well off each other that they are completely believable as good friends.

It’s the first indication of what Bill Murray would later say in Stripes (1981), that Bobby is “part of a lost and restless generation.” He doesn’t have time for people that can’t keep up with him. He cheats on Ray and then lies to her about it. She knows he is and even cries about it but stays with him anyway. Even Elton rubs Bobby the wrong way, provoking him to say, “Keep on telling me about the good life, Elton, because it makes me puke!”

Five Easy Pieces is a slice-of-life film whose story doesn’t begin properly until 30 minutes in when Bobby quits his job and Elton is arrested – all on the same day. To make matters worse, Bobby’s sister Partita (Lois Smith) tells him that their father is very ill, having barely survived two strokes. We also find out that Bobby is a classically trained pianist and comes from an affluent family. He soon heads out to be with them, Ray in tow and the film shifts gears into road movie territory before finally settling into a family drama. 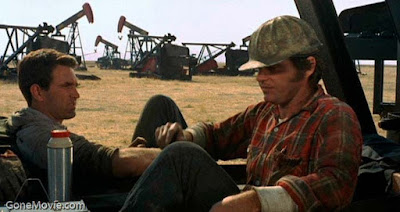 Nicholson plays Bobby like a man at war with himself. He is a misanthrope trying to act like he cares about other people. He tries to make it work with Ray but can’t help but be cruel to her. It’s in his nature to condescend to those that can’t keep up with him or piss him off. This usually manifests itself in treating Ray like shit most of the time but it is also funny and deserving, like the famous diner scene where he gives a surly waitress a piece of his mind in trademark Nicholson fashion.

His relationship with Ray is the first of several contradictions about the man. Rafelson sometimes conveys these contradictions visually, like when Bobby and Elton are stuck in a traffic jam on a freeway and the former hops up on the back of a truck and begins playing the piano strapped to it. He starts playing a classical piece really well and gets so engrossed in it that he doesn’t realize (or care) that the truck is taking the off ramp while Elton continues on. It’s quite the image: Bobby in his oil rigging work clothes playing piano. His contradictory nature is what makes him such a fascinating character. He’s Holden Caulfield all grown up and like J.D. Salinger’s most famous protagonist, he can’t stand phonies, dishing out scathing put-downs to people that upset him, like the aforementioned waitress.

The scenes where Bobby interacts with his family are when we get the most fascinating insights into his character and the closest to understanding him. His family is a bunch of eccentric intellectuals that delight in taking digs at each other and it is easy to see why Bobby hasn’t visited them in years. Most interestingly, we see how he acts around a woman named Catherine (Susan Anspach) who is his intellectual equal. She doesn’t put up with any of his shit and accuses him of having no inner feeling, but they have a brief fling anyway. She ends up offering a very accurate assessment of Bobby’s personality in a quietly powerful scene that Susan Anspach delivers in direct and eloquent fashion. 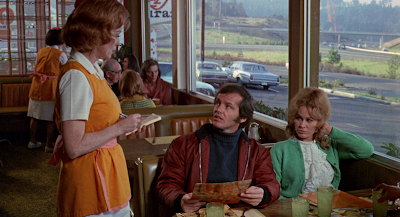 Karen Black has the tough job of playing a sweet woman who may not be the smartest person but she doesn’t deserve Bobby’s condescension. Ray is a target for much of his scorn. It’s not that she’s dumb per se; it’s just that she’s not as smart as Bobby. She doesn’t always understand what he says or gets things he references but then few people do outside of his family. Ray is not blessed with the kind of self-awareness that curses Bobby. After the first time he lays into her verbally we feel sympathy towards Ray. Sure, she’s annoying at times and talks a lot about nothing in particular, but she’s a nice person – an innocent of sorts. Black does a good job of refusing to reduce Ray to a silly caricature.

Jack Nicholson first met Carole Eastman in 1957 at an acting class taught by veteran character actor Jeff Corey. They became friends and would work on The Shooting (1967) with her writing the screenplay and him acting in it. Bob Rafelson met Nicholson at a film society in Hollywood and they bonded over foreign films and John Cassavetes. They ended up writing the script for the Monkees movie Head. At the time, Nicholson had given up acting and told Rafelson, “I’m tired of it. I always get to play the shitty B-part not the A-part, and it’s always in conventional movies.” The director responded, ‘Well, not the next one.’ The next one I want you to star in it.”

Rafelson had written some scripts in the 1960s based on friends he had in college and afterwards, some of whom were dead: “So I was writing about self-destruction.” He envisioned the protagonist of what would become Five Easy Pieces as a concert pianist, originally coming up with a vision of “Jack, out in the middle of a highway, the wind blowing through his hair, sitting on a truck and playing the piano.” He wasn’t happy with the scripts he had written and showed one of his scripts to Eastman. He knew of her work on The Shooting and Puzzle of a Downfall Child (1970). He said of the writer: “I don’t think I ever met anybody – male or female – with such audacious and bold imagination.” 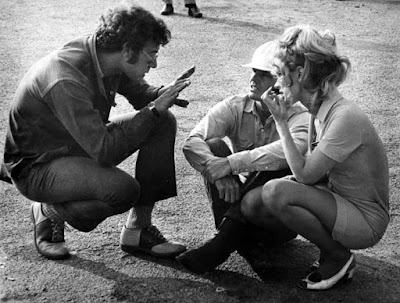 He asked her to work on it and she came back with Five Easy Pieces. Rafelson recalled, “The only scene of mine she kept was the one in the diner.” The character of Bobby was a composite of Nicholson, her brothers who “drifted almost mysteriously from place to place, and whose behavior remained finally inexplicable to her,” Ted Kennedy, “whose position as the youngest in his own celebrated family suggested the kinds of competitive feelings and fears” she wanted for Bobby, and her “own deep personal beliefs.” Rafelson said of Eastman, “Here she was, this rather thin and kind of fragile-looking woman and she could easily write about the most obscure things like waitresses, Tammy Wynette, bowling alleys, oil fields…”

Rafelson ended up tweaking Eastman’s script in several ways, most significantly the ending, which as originally written, had Bobby die when his car veered off a bridge – an allusion to Kennedy and Chappaquiddick. Nicholson and Rafelson did not like this ending with the former wanting Bobby to walk down a street alone, but the latter ultimately went with the one in the film. Eastman was quite upset at the changes Rafelson made and felt betrayed.

Five Easy Pieces was shot over 41 days, starting in early winter 1969 and going into January on a budget of $876,000 on location around Bakersfield, California, Eugene, Oregon, and Victoria, British Columbia. When it came to the climactic scene between Bobby and his father, Nicholson and Rafelson disagreed on how the character should act. The director wanted Bobby to break down and cry and the actor felt that he would be doing it out of self-pity. Nicholson ended up rewriting the scene himself, waiting until the day of, on location, to write it. While writing and then acting the scene, he drew on his own relationship with his actual father. 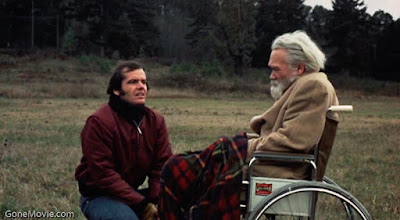 Roger Ebert gave the film four out of four stars and called it a “masterpiece of heartbreaking intensity.” In his review for the Village Voice, Nick Pinkerton wrote, “director Bob Rafelson and screenwriter Carole Eastman’s film is totally human, trading [Easy] Riders’ counterculture mytho-poetics for a study in the charisma of disdain (which Nicholson personifies) and how rebellion and loutishness are often indistinguishable (ditto), never excusing the pain Bobby causes.” However, The New York Time’s Roger Greenspun felt that it was a film “that takes small risks and provides small rewards.”

At the end of Five Easy Pieces, Bobby comes to terms with who he is and makes peace with his father in a moving scene that demonstrates his capacity for inner feeling – he just keeps it buried deep inside, only allowing it to surface during rare occasions. He says to his father, “I move around a lot, not because I’m looking for anything really but because I’m getting away from things that get bad if I stay.” This is as close as Bobby gets to a confession of sorts, or an explanation of his behavior. Rafelson has said that he saw Five Easy Pieces about a man “condemned to search for the meaning of his life.” Bobby spends the entire film discontented, looking for something he can never find, doomed to spend his life searching for the meaning of it all. Rafelson and Nicholson would work together again several times, but this maybe their best collaboration to date.

Knepperges, Rainer. “The Monologist and the Fighter: An Interview with Bob Rafelson.” Senses of Cinema. April 2009.