BLOGGER'S NOTE: Every week this month I plan on taking a look at different kung fu movie from the legendary Shaw Brothers studio that helped pioneer the genre in the 1970s.

During the 1970s, the Shaw Brothers produced some of the very best kung fu movies, or wuxia as it was called in China, ever made. Their first big success actually came out in the 1960s – One-Armed Swordsman (1967), which made $1 million in Hong Kong, but it wasn’t until a few years later that they made in-roads all over the world with King Boxer (a.k.a. Five Fingers of Death, 1972). It was the first of its kind to be picked up by Warner Bros. and distributed in the United States. It helped kick start the kung fu movie craze of that decade.

The movie gets right into it as an old martial arts teacher is attacked by a group of thugs armed with knives. Despite his advanced age, he is able to hold them off, jumping through the air like a man half his age. Fortunately, one of his best students, Chao Chih-Hao (Lieh Lo) arrives just in time to scare them off. The teacher realizes he can no longer teach his pupil anything new and sends him off to study under a superior master, Shen Chin-Pei (Fang Mian).

Meanwhile, local martial arts despot Ming Dung-Shun (Tien Feng) controls the five northern provinces and maintains dominance by befriending and then enlisting martial arts experts like Chen Lang, an man with an exceptionally hard forehead that he uses to best a local strong man (Bolo Yeung) by headbutting him into submission!

Chao shows up at Master Shen’s school and is easily bested by one of his students only to be relegated to the kitchen. He toils away there but is tested regularly and randomly until he is soon dodging spears and breaking branches with his bare hands. He is then deemed worthy enough to be a student. 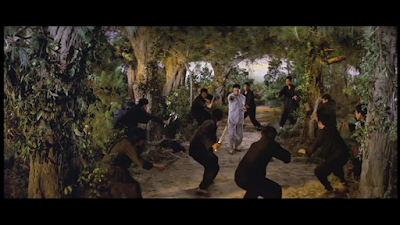 There is an upcoming national tournament among the various martial arts schools and Master Ming sends Chen Lang to trash Master Shen’s school. He makes quite an entrance by taking the school’s sign and breaking it in half with his head. He then proceeds to thrash the students, sending one through the ceiling and another through a wall. Chen Lang confronts Master Shen and bests him through cowardly tactics.

Chao decides to confront Chen Lang and amazingly is able to defeat him. He is rewarded by Master Shen with being bestowed knowledge of the Iron Palm technique that causes his hands to glow red as he channels his inner chi to deadly effect. He plans to compete in the tournament. Being a dishonorable man, Master Ming brings in ringers from Japan to ruin Master Shen’s school’s chances.

By making Master Ming’s brutal hired guns Japanese, the Shaw Brothers cannily appealed to Chinese national pride. No wonder King Boxer did so well in Hong Kong! They fight dirty, are remorseless killers, and punish Chao so severely that we want to see him get better and exact well-deserved vengeance on the bad guys. Ming even uses his own son, Meng Tien-Hsiung, as an enforcer. You can tell that his son his a bad guy by the sly, arrogantly evil expression permanently affixed to his face and the long cigarette holder he uses while perpetually fondling two ballbearings as his goons do the dirty work for him.

Director Chang-Hwa Jeong employs sudden zoom in and outs and even the occasional freeze frame during many of the movie’s dynamic fight scenes. This is a beautifully shot movie with expert use of the 2.35:1 widescreen aspect ratio (Shawscope!) and superb compositions of every frame. The use of shadows for dramatic effect in one scene and a brief fight that takes place at sunset resembling something right out of 1950s Technicolor era, is part of the reason why King Boxer is so revered among kung fu movie fans.

The kinetic fight scenes are exciting to watch and, at times, surprisingly brutal with plenty of blood, eye gouging and even a decapitation! They are expertly choreographed, gradually build up in intensity and in terms of style to the final showdown between Chao and Tien-Hsiung at the competition where, of course, the Iron Palm technique is used, but this sequence is merely a warm-up to the penultimate fight at the end as Chao takes down all the bad guys, one by one, in an extremely satisfying conclusion.

Korean director Chang-Hwa Jeong was hired by the Shaw Brothers because he was capable of making a modern action movie. He received the screenplay written by Kong Yeung but felt that the story was “ordinary.” He took the core of it and then changed the content himself, creating things like the Iron Palm technique, the hired enforcers from Japan, and the character of Chen Lang. He wasn’t able to hire martial arts choreographers as they were working with Chinese directors and so he hired their assistants instead. At the time, wire work was the norm for fight sequences but he found it too slow and not realistic enough. He used trampolines, which he found conveyed fast, powerful action.

King Boxer follows a traditional hero’s journey as he must overcome insurmountable odds and personal hardships to beat the bad guys while maintaining his honor and that of his school. It tells a simple yet effective tale full of betrayal, torture, revenge and even some heroic style redemption thrown in for good measure – all heightened to melodramatic levels making for a very entertaining ride. Our hero has to deal with a devastating injury and his own self-doubts before he can face the bad guys and use the Iron Palm technique to save the day. You soon find yourself rooting for Chao to win the competition and make himself worthy of the cute woman he loves as well.

When King Boxer debuted in the U.S. under the title, Five Fingers of Death, it was a big hit, paving the way for Bruce Lee’s subsequent success and launching the kung fu craze of the ‘70s. In the 1980s, it inspired filmmaker John Carpenter to make Big Trouble in Little China (1986) and, more recently, was a huge influence on Quentin Tarantino’s Kill Bill films where he paid direct homage to King Boxer. It is a movie that still holds up and remains one of the best examples of its kind from the ‘70s.