DVD of the Week: Son of Rambow 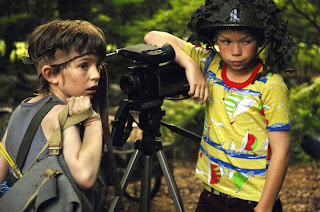 The things we see at an impressionable young age, be they films, television programs, books or music, leave a lasting impact on us because we haven’t had many life experiences up to that point in our lives. So, those formative experiences tend to leave a lasting impact. This also applies to the friendships you form and these two things intersect in Son of Rambow (2007). In some respects, this film is Be Kind, Rewind (2008) for kids but instead of several films being recreated on the cheap, there is just one – the first Rambo film, First Blood (1982).

Will Proudfoot (Bill Milner) is a dreamer who spends his free time drawing. Lee Carter (Will Poulter) is the school bully who spends his free time getting into trouble. Will comes from a strict, religious family while Lee’s family is very wealthy and never around, except for his older brother who bullies him. One day, Lee gets Will in trouble and the two boys form a tentative friendship.

In his spare time, Lee bootlegs films playing at the local cinema and one of them is First Blood, which Will inadvertently watches. For an impressionable young boy who is not allowed to watch TV, the film is a revelation and his dreams and drawings are filled with fantasies where he is the son of Rambo. What Lee really wants to do is make a movie and starts off using Will as his stuntman.

Lee and Will decide to make their own version of First Blood with Will playing Rambo and Lee as Colonel Trautman. The two boys bond during filming as Lee helps Will come out of his shell and Will gives Lee something to care about. More importantly, they become close friends – something that both boys lack in their lives.

Lee and Will complement each other well as Will’s family is too strict and Lee’s are too lax. Obviously, casting is crucial and the two young actors – Bill Milner and Will Poulter – are excellent. They have wonderful chemistry together and don’t suffer from the usual self-conscious acting tics that plague many childhood actors. Milner conveys a dreamy enthusiasm while Poulter has a certain Dennis the Menace charm – pragmatism in contrast to Milner’s head-in-the-clouds mentality. 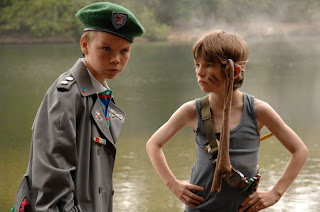 Son of Rambow is a celebration of films and filmmaking. Lee and Will are definitely not in it to make money. They do it because it’s fun and a form of escape from their boring school lives and from their stifling home lives. Because they have no budget and limited resources, the two boys have to be more creative and get the footage they need in true guerrilla filmmaking fashion – literally run and shoot. And once they enlist the help of a group of French exchange students, the scale of their film increases in a way that is reminiscent of Max Fischer’s ambitious plays in Rushmore (1998). However, at its core, Son of Rambow is about a little boy’s yearning for his absent father, how he deals with it in his art and rich fantasy world and his friendship with another boy his age.

There is an audio commentary by writer/director Garth Jennings, producer Nick Goldsmith, and actors Bill Milner and Will Poulter. Jennings says that they showed Sylvester Stallone the film and he loved it. Originally, there was a voiceover narration over the opening credits by Will as an adult but Jennings didn’t like it and so it was scrapped. This is a very loose, playful track as Jennings plays lame music at random moments which I could have done without but it is nice to hear everyone joking with each other as they recount all kinds of filming anecdotes.

“Boys Will Be Boys: The Making of Son of Rambow.” Like the film itself, this featurette is atypical of the usual fluff press kits. Jennings and Goldsmith interview Milner and Poulter, who had only done school plays before this film. The kids seem very down-to-earth and talk about what it was like making their first film with clips from it and behind-the-scenes footage peppered sporadically throughout. Jennings talks about how the film is based loosely on his own childhood. 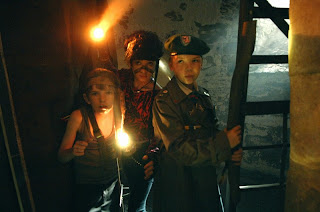 “Garth’s Short Film ‘Aron’” is a cute home movie that made when he was a kid and ended up becoming the inspiration for Son of Rambow.

“Son of Rambow Website Winner” is an amateur short film like the one Will and Lee make in the film that won the online contest. It is actually pretty well done and entertaining.