DVD of the Week: Burn After Reading 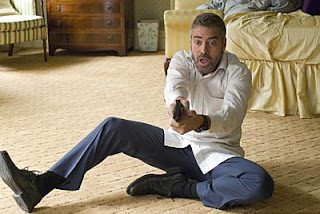 As they did with (1996), the Coen brothers followed up the Academy Award-winning crime thriller No Country For Old Men (2007) with a comedy, in this case Burn After Reading (2008), a farce set in The Coens have adhered to the pattern of following a dramatic film with a comedy for most of their career – Raising Arizona (1987) followed Blood Simple (1985), for example. Whether it’s by design or just to amuse themselves, they seem to like mixing up genres.

CIA analyst Osbourne Cox (John Malkovich) is being taken off international duty because of an alleged drinking problem and is relegated to a desk job in Understandably upset, he quits and decides to write his memoirs. Meanwhile, his wife (Tilda Swinton) is having an affair with Harry Pfarrer (George Clooney), a U.S. Treasury agent. A compact disc with a copy of Cox’s memoirs is found at a fitness center by one of its employees, Chad Feldheimer (Brad Pitt), a dimwitted fitness nut. He teams up with a fellow employee named Linda Litzke (Frances McDormand) to blackmail Cox. She plans to spend her half of the money on completely unnecessary cosmetic surgery.

With the exception of Brad Pitt, the cast plays their roles fairly straightforward, so much so that you’d hardly know it was a comedy. As a result, Pitt all but runs away with the film as a clueless goofball who thinks he knows what he’s doing but is in way over his head, which is never a good thing in a Coen brothers film. The scene where meets Cox is a lot of fun to watch if only to see the fitness trainer try to match wits with the ex-CIA man. Pitt squints suspiciously and tries so very hard to appear competent. He delivers a wonderfully entertaining comedic performance that seems at odds with the rest of the film. Much like Tom Hanks in The Ladykillers (2004), Pitt deserves to be in a better Coen brothers film. 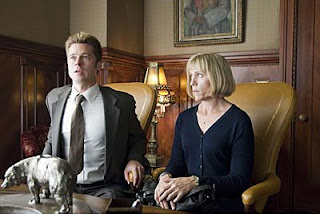 The problem with Burn After Reading is that it’s populated by vain, greedy and generally unlikable characters that only care about themselves. And in case you missed the point or message of the film, two CIA bureaucrats (Rasche and Simmons) sum everything up for us, like Marge in and The Stranger in The Big Lebowski (1998) only in those cases it was done for poignant effect. In case of Burn After Reading it simply spells everything out just in case you nodded off partway through or lost interest in what was happening. As they demonstrated with Intolerable Cruelty (2003) and The Ladykillers, the Coens are not successful with films in a contemporary setting (even No Country was a period piece). By their high standards, Burn After Reading is a disappointment.

“Finding the Burn” takes a brief look at the making of this film. George Clooney points out that it’s not a political film per se but rather involving “people doing dumb things.” Both Ethan Coen and actress Frances McDormand say that the film is about middle-aged people while Ethan jokingly refers to it as their “Tony Scott, Bourne Identity kind of movie. . .without the explosions.”

“DC Insiders Run Amuck” examines the origins of the film. The Coens wanted to write a film for specific actors in mind and so it was contingent on getting the likes of Clooney and Brad Pitt. Joel Coen says that Pitt embraced his “inner knucklehead” on this one. Basically, the idea was to transform Clooney and Pitt into two “suburban dorks.” 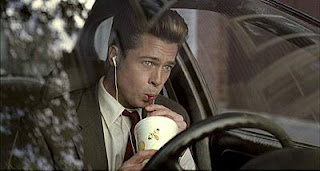 Finally, there is “Welcome Back George,” which takes a look at how the Coens like to work with Clooney and always want him to play idiotic characters or “dopes” as the actor calls them.