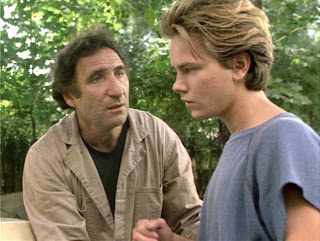 Imagine the scene: a teenager is playing baseball. It's his turn up at bat and he promptly strikes out. He dejectedly leaves the diamond on his bike — presumably bound for home. On the way, he spots two cars with suspicious looking men in them. The boy quickly ditches the cars and finds a younger boy by giving a dog his shoe. It does not take long to deduce that they are brothers. No explanation is given for this rather odd behavior. However, we soon find out that the boy's name is Danny Pope (River Phoenix) and that his parents, Arthur (Judd Hirsch) and Annie (Christine Lahti) are 1960s subversives who went underground after claiming responsibility for bombing a military research lab that was developing napalm in 1971. The resulting action accidentally blinded a janitor which caused the Popes to become fugitives, roaming the country like gypsies, always trying to stay one step ahead of the law. Arthur and Annie made a choice a long time ago to live this kind of life. But their two sons are also stuck with this choice and its consequences. As Annie tells her husband at one point, "Look at what we're doing to these kids. They've been running their whole lives like criminals and they didn't do anything."

And so begins Running on Empty (1988), a film about choices: how important they can be and how they affect others. As the film progresses, Danny, the eldest son, is on the verge of being accepted to college. He is a gifted musician who discovers that he has a real chance at getting accepted into Juilliard. To make matters more complicated, he falls in love for the first time with Lorna (Martha Plimpton), a smart, independent girl who shows Danny that he must develop a life of his own. As a result Danny must make the toughest choice of his life. Does he stay with his family, thereby sacrificing any chance for a life of his own, or does he take advantage of a shot at a real life and run the risk of never seeing his family again? The dramatic tension central to the film is the choice Danny must make and how it will affect those around him. 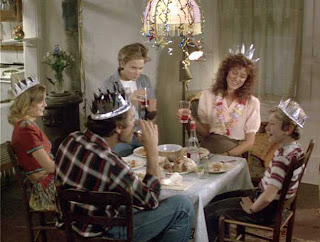 The film’s producers Amy Robinson and Griffin Dunne first thought of the idea for Running on Empty in the early 1980s after reading a newspaper story on the arrest of two underground radicals in upstate New York. In 1983, Lorimar commissioned a screenplay. Screenwriter Naomi Foner was brought on board to work on the script and decided to tell the family’s story from the children’s’ perspective. She had known radicals who had gone underground and interviewed people who had lived that way, incorporating details from their lives into the script. Foner was also inspired by several women who were members of Students for a Democratic Society, now living in hiding with their children. Lorimar decided not to go ahead with production because the executives who had originally approved the project had been replaced.

Director Sidney Lumet read Foner’s script and decided to exercise an option he had as part of his contract with Lorimar that allowed him to produce one film of his choosing. Actress Christine Lahti was cast first and she had participated in the student unrest at the University of Michigan in her youth. She did a lot of reading as research and was fascinated by the support system that provides people who have gone underground with money, cheap housing and fake IDs. River Phoenix and Martha Plimpton were cast next.

Running on Empty is a film that refuses to restrict itself to a specific genre. As Lumet, points out, "it's not exactly a coming-of-age story. Danny, the older son, is already mature and knowledgeable. It's more about the consequences of our actions and the dynamics of what makes a family. These people's lives are a mess. The children are the only success they've got." If anything, Running on Empty is also a sobering look at the darker side of the '60s. Some people really wanted to change the world and found out that their actions, no matter how noble they seemed, had their consequences as well. The film shows how two people are forced to live with the actions of their past and how it has changed their lives and the lives of their children forever. However, the film ultimately focuses on Danny and his attempts to break free of his parents' problems and lead a normal life.

Danny's story is so powerful and interesting because of the intelligent screenplay by Naomi Foner and the performance by River Phoenix. Foner's script contains realistic dialogue so natural that it could have been plucked from real life. Her characters are not hackneyed stereotypes but engaging three-dimensional human beings that you come to love and care about over the course of the film. And this reaction is due in large part to the actors themselves: veterans like Judd Hirsch and Christine Lahti and younger thespians like Phoenix and Martha Plimpton deliver outstanding performances. 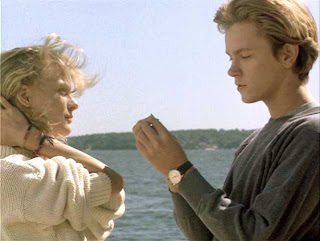 The moments between Phoenix and Plimpton, in particular, are charged with emotion and intensity that has a real ring of honesty to it. There is a scene where Danny comes to see Lorna in the middle of the night and he sneaks her out of the house in order to tell her who he really is and why he is so evasive about revealing personal information. It is a warm, intimate moment that feels completely authentic. The way the two actors interact with each other is touching and very emotional because it seems so believable. Others must have thought so as well. Phoenix, only 17 years old at the time, was nominated for the Academy Award for Best Supporting Actor for his portrayal of Danny as well as being named Best Supporting Actor by the National Board of Review and being nominated for a Golden Globe. It was a real testament to his acting ability and is without a doubt one of his best performances, equaled only by his work in Stand by Me (1986) and My Own Private Idaho (1991).

The film was barely given a decent theatrical release and was fairly well-received by critics at the time. Film critic Roger Ebert gave the film four out of four stars and called it "one of the best films of the year." In her review for the New York Times, Janet Maslin wrote, "The courtship between Danny and Lorna is staged especially disarmingly, with Mr. Phoenix and Miss Plimpton conveying a sweet, serious and believably gradual attraction.” Newsweek magazine’s David Ansen wrote, "A curious mix of soap opera and social history, Lumet's film shouldn't work, yet its fusion of oddly matched parts proves emotionally overpowering. You have to be pretty tough to resist it.” However, Hal Hinson, in his review for the Washington Post wrote, “Running on Empty doesn't make much sense for the title of the movie ... but it does work as a description of the director. Sidney Lumet may be the laziest major director working today.”

Running on Empty is about making the kind of decisions that alter one's life. Danny's parents made a decision a long time ago and now it is their son's turn. What is so interesting about a film like this is that it explores the ramifications of these kinds of important decisions and how people live with the results. This film refuses to depict its characters in any kind of cliché manner, instead opting for a kind of realism that has a ring of honesty to it. After watching this film, you feel like you have just looked through the window into a very special world with characters that you grow to care about and admire. It is the kind of film that can affect you in a meaningful, emotional way that resonates long after the images fade from the screen. For all the seriousness of its subject matter, Running on Empty is a very entertaining film that refuses to give any easy answers to the complex problems it raises.