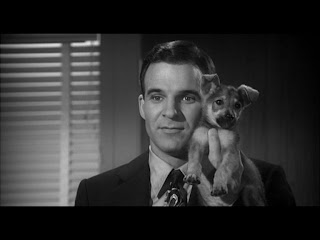 In the early 1980s it must’ve seemed like a crazy idea to mix several contemporary actors with clips from classic films into something resembling a coherent story. Even now it seems like a pretty wild idea and one with few antecedents (Kung Pow! Enter the Fist is the only one that comes immediately to mind). But director Carl Reiner and comedian Steve Martin had the chutzpah to give it a try with Dead Men Don’t Wear Plaid (1982), a comedy that simultaneously pays tribute to and affectionately parodies film noirs from the 1940s and 1950s. Only a few years earlier, Reiner and Martin hit comedic pay dirt with The Jerk (1979) and so anticipation was high for this new collaboration. The result was a rare cinematic experiment that was viewed by some as lazy filmmaking and a clever homage by others.


Reiner sets the proper tone right from the get-go by featuring the Universal Pictures logo from the ‘40s. The opening credits play over a rainy city skyline at night (does it get any more noir than that?). The buildings are obviously an illustrated backdrop signifying that we are dealing with a fantasy world drenched in noir, anticipating Sin City’s (2005) own artificial world by many years. Private investigator Rigby Reardon (Steve Martin) is hired by the beautiful Juliet Forrest (Rachel Ward) to investigate the mysterious death of her father John Hay Forrest (George Gaynes), a highly regarded scientist and cheesemaker. The authorities have ruled it an accident but she suspects murder, her father the victim of a giant conspiracy.

Reardon’s hard-boiled voiceover narration plays around with the pulpy dialogue common in the film noir genre for comedic effect. For example, after his first meeting with Juliet, he thinks to himself, “I hadn’t seen a body put together like that since I solved the case of the murdered girl with the big tits.” His voiceovers also complement visual gags like when Reardon arrives at Dr. Forrest’s cheese lab and he observes, “I had no trouble finding Dr. Forrest’s cheese lab. It smelled like the number on the door.” Cut to a shot of a door with a “2” on it. In another scene, Juliet can actually hear Reardon’s voiceover narration, much to his surprise. There are a few gags that would be repeated in the short-lived Police Squad television show, which was also a parody of the crime thriller genre, but Dead Men Don’t Wear Plaid’s focus is predominantly film noir.

Reardon is not your typical gumshoe. For example, he goes into a hysterical murderous rampage whenever he hears the words, “cleaning woman.” Steve Martin wisely knows when to play it straight, like when it comes to saying the hard-boiled dialogue that often authentically evokes film noirs while also poking fun at them as well. He also picks his moments to cut loose and act zany, most notably whenever the “cleaning woman” phrase is invoked. Martin has a lot of fun interacting with various screen legends, like the phone conversation he has with a hysterical Barbara Stanwyck from Sorry, Wrong Number (1948). His poker-faced delivery of most of his dialogue is what makes it so funny, as is some of the physical bits of business he does, like when Reardon makes a cup of his famous java for Burt Lancaster from The Killers (1946), which evidently involves an entire bag of coffee grounds and two eggs (including the shells). 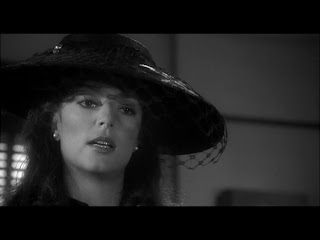 Juliet is not a typical femme fatale. For starters, whenever Reardon is shot she removes the bullet with her teeth, a procedure she learned at camp. Rachel Ward looks absolutely gorgeous all dolled up and looking like she walked right out of a film from the ‘40s, which is obviously the look they were going for. Ward has the perfect sultry voice of a noir fatale and watching this film again serves as a vivid reminder of what a sexy presence she was in the 1980s with films like Against All Odds (1984), which really put her on the map and into the mainstream consciousness. Ward seemed to gravitate towards crime films, also appearing in the underrated neo-noir After Dark, My Sweet (1990). Martin and Ward play well off each other and have several funny exchanges of dialogue, like when she tells him at one point, “You’re a very smart man,” to which he replies, “So was Abraham Lincoln. Look what happened to him.”

In the summer of 1980, Martin was having lunch with Reiner and screenwriter George Gipe. They were discussing a screenplay Martin had written when the comedian suggested that they use a clip from an old film somewhere in his project. From this suggestion came the idea of using all sorts of clips from classic films throughout the entire feature. The three men left the lunch thinking about how they could incorporate all of these old clips into a story. Reiner figured that they could work Martin into the old footage via tricks like over-the-shoulder shots so that it looked like he was talking to these famous actors.

Reiner and Gipe spent countless hours viewing classic films looking for specific shots and “listening for a line that was ambiguous enough but had enough meat in it to contribute a line opposite,” Reiner said at the time. He and Gipe took lines of dialogue from the clips they wanted to use and juxtaposed them while also trying to write a story based on them. They finally worked out a story and then met with Martin who contributed some funny material of his own. In preparation for the film, he purposely chose not to watch any classic film noirs because he “didn’t want to act like Humphrey Bogart ... I didn’t want to be influenced.” 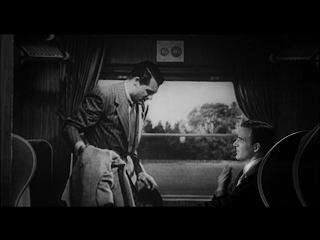 In order to accurately recreate the look of film noir, Reiner recruited some of the people that helped define several classic films from the genre. Costume designer Edith Head, responsible for memorable outfits in films like Double Indemnity (1944), Notorious (1946) and Sunset Boulevard (1950), created over 20 suits for Martin in similar fashion to those worn by Cary Grant or Jimmy Stewart back in the day. Production designer John De Cuir, a veteran with 40 years of experience on films like Brute Force (1947) and The Naked City (1948) designed 85 sets over the ten-week shooting schedule. Rounding out these cinematic legends was composer Miklos Rozsa, who created the atmospheric soundtracks for Double Indemnity, Spellbound (1945) and The Asphalt Jungle (1950), and he helped give the film an authentic noir sound. Dead Men Don’t Wear Plaid looks and sounds as good as it does because of the work of these talented people. Sadly, it would be the last film for both Head and Rozsa.

Reiner and director of photography Michael Chapman do a pretty good job blending the vintage footage with their own. Nowadays you would just use CGI but back then they didn’t have that luxury and had to pay careful attention to the cinematography so that their shots would match up, making the seamless blend that much more impressive. Chapman studied the angles and lighting popular among ‘40s film noir, conducting six months of research with Technicolor to try and match the old film clips with his new footage. Principal photography began on July 7, 1981 with the bulk of it done on the soundstages of Laird International Studios in Culver City and three exterior locations shot in and around Los Angeles. 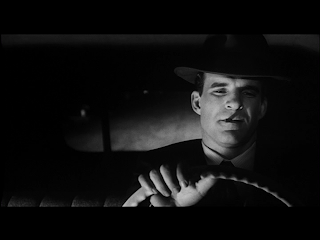 Dead Men Don’t Wear Plaid actually received a pretty decent response from critics. In his review for Newsweek magazine, David Ansen wrote, "A one joke movie? Perhaps, but it's such an engaging joke that anyone who loves old movies will find it irresistible. And anyone who loves Steve Martin will be fascinated by his sly performance, which is pitched exactly between the low comedy of The Jerk and the highbrow Brechtianisms of Pennies from Heaven." The New York Times’ Vincent Canby praised Martin's performance: "the film has an actor who's one of America's best sketch artists, a man blessed with a great sense of timing, who is also self-effacing enough to meet the most cockeyed demands of the material." However, Time magazine's Richard Corliss wrote, "The gag works for a while, as Martin weaves his own plot-web into the 18 old movies, but pretty soon he's traveling on old good will and flop sweat".

Dead Men Don’t Wear Plaid is quite possibly my favorite Steve Martin comedy, even over beloved classics like The Jerk and L.A. Story (1991), because of its film noir trappings and its very funny script chock full of all kinds of gags, both verbal and physical. It is a film noir lover’s dream as we get to see Martin “interact” with the likes of Humphrey Bogart, Burt Lancaster, Veronica Lake, Ingrid Bergman and countless others. There is also a lot of fun to be had identifying which films are used in the various clips seen throughout but this is also one of its criticisms – that the film is nothing more than a stylish parlor game of spot the reference. Dead Men Don’t Wear Plaid is some kind of crazed, ambitious experiment that has rarely been duplicated – clearance rights for all of these clips would be a legal nightmare in today’s ultra-litigious climate. In retrospect, the film had limited commercial appeal which may explain why it didn’t exactly set the box office on fire, disappointing mainstream audiences expecting Reiner and Martin to rehash The Jerk. Dead Men Don’t Wear Plaid is not talked about much anymore making it prime for rediscovery as a cult film oddity.

Some of the stills used in this article came from the Precious Bodily Fluids blog and this excellent post on the film (featuring more stills). Here is a pretty snazzy fan site.