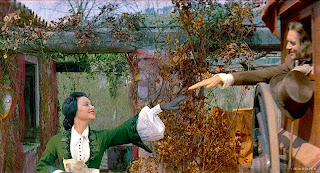 If Lola Montes were alive today I’m sure she would be a tabloid sensation or perhaps a reality television star famous for her notoriety. Born Eliza Gilbert, she reinvented herself during the late 1800s and tried her hand at singing, acting and dancing – failing miserably at all three. What she lacked in talent, however, she more than made up for in sex appeal. Rumors swirled around her about various lovers and Bavaria’s Ludwig I bestowed upon her the title of Countess of Landsfeld. She challenged her critics to duels and dared to smoke in public.

In short, Montes led a pretty exciting life ripe for cinematic treatment. Director Max Ophuls took up the challenge in what would be his last film and the only one in color and Cinemascope. When Lola Montes was released in 1955, the critics savaged it causing the film’s producers to panic and re-edit it. The film did have its admirers, chief among them filmmaker Francois Truffaut and critic Andrew Sarris. By 2008, Lola Montes was restored to Ophuls’ original intentions and digitally remastered to its original glory, preserving its vibrant color scheme.

In a very clever and rather fitting (considering the colorful life she led) framing device, the ringmaster (Peter Ustinov) of an extravagant circus introduces Lola Montes’ (Martine Carol) life, informing us that it will be told “in pantomime, acrobats, tableaux vivants, with music and dance and with the entire orchestra.” As he is saying this, Montes is brought in wearing a gorgeous gold dress. Soon, the lights go down and she is bathed in blue light. The ringmaster promises that she will answer the most shocking, intimate and indiscreet questions about her “scandalous career as femme fatale.” It’s an audacious opening sequence filled with midgets, clowns and acrobats in a way that would make Baz Luhrmann (or Fellini) green with envy at its flamboyance.

Ophuls flashes back to Montes’ affair with composer Franz Liszt (Will Quadflieg), one of several lovers that flirted in and out of her life. The film keeps returning to the circus so that the ringmaster can introduce us to another period of her life. Montes dealt with an uncaring mother and an unfaithful husband and went on to become a successful ballerina despite her obvious lack of talent. And so began a short but eventful career in the arts. What she lacked in actual talent, she more than made up for in sheer determination.

Martine Carol brings an enticing sensuality to the role. She’s beautiful but also brings an intelligence to a woman that knew exactly what she wanted. Montes wears one amazing outfit after another which only serves to highlight Carol’s natural beauty. 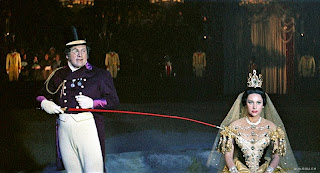 Lola Montes is a marvel of production design as we are presented with one incredibly detailed and decorated set after another, each with their own dazzling colors enhanced by Cinemascope. Ophuls’ film is a fascinating, inventive biopic about a true original, a woman that packed a lot of living into her 39 years, defiantly refusing to be tied down by any man, and traveling the world. Ophuls employs a stunning color scheme fitting for such a colorful character. His use of Cinemascope gives Montes’ life an epic look. Lola Montes is an underappreciated masterpiece finally being given its due with this top notch DVD release from the Criterion Collection.

The first disc includes an audio commentary by film scholar Susan White, author of The Cinema of Max Ophuls. She states that Lola Montes is not a film for everyone because of the unusual attention to style. She discusses the odd casting of Martine Carol and what she brought to the film. White does an excellent job of analyzing the film’s style and what it means in relation to the characters and the story. She also sheds light on the film’s rocky production. This is a very informative track full of insight into the film and the people that made it.

The second disc starts with “Cineastes de Notres Temps,” an episode of the French television series featuring several of Ophuls’ collaborators, many of whom worked on Lola Montes. The film’s cinematographer talks about the director’s love of movement. In fact, everyone talks about his working methods and obsession with movement within film. 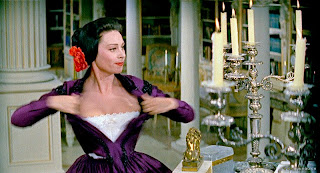 “Max by Marcel” is a 2009 short film by Marcel Ophuls (Max’s son) where he talks about his work on the film as an assistant director. Marcel interviews a few people who also worked on the film. The producers did not like the footage Ophuls was shooting forced Martine Carol and the use of color and Cinemascope on him.

“Martine Carol Hair Tests” features silent footage of the actress showing some of the fantastic hairstyles she sports in Lola Montes.

Finally, there is the rerelease trailer.