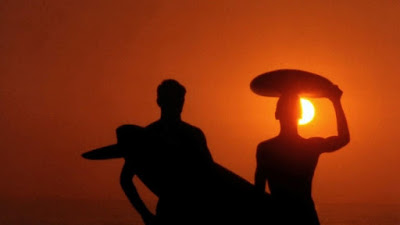 The Endless Summer (1966) is considered by many surfers and surfing aficionados to be the Citizen Kane (1941) of surfing films. While it certainly wasn’t the first, for its time Bruce Brown’s film was the most ambitious, well-made and popular one of its kind. The Endless Summer not only changed the general public’s view of surfing but it also paved the way for countless films about the sport. However, none of them have quite been able to convey the carefree attitude and sheer joy of surfing like Brown’s film – not even his own sequel, The Endless Summer II (1994) or the film by his son Dana entitled, Step Into Liquid (2003).

The first shot of The Endless Summer says it all: the silhouette of two surfers with their boards against a setting sun. Brown follows this up with a shot of the surfers sitting on their boards in the ocean drenched in the orangish gold of the setting sun. Right from the get-go, with these shots and a montage of the ocean and the surf all bathed in this incredible sun, Brown establishes that this film will be an unabashed romantic take on surfing. Even the laid-back surf music by The Sandals conveys a hazy, lazy summer vibe drenched in romanticism. The film’s authenticity is quickly established with a title card that reads, “Filmed in the actual locations around the world.” In other words, there will be no use of cheesy looking rear projection a la Gidget (1959) or the Frankie and Annette beach movies. The Endless Summer is a film made by and for surfers.

Brown’s voiceover narration starts off perfectly as he says, “Summer means many different things to different people...” and rattles off a few hobbies that people like to do before yelping out the word, “surfing” excitedly and the film cuts to a shot of a guy wiping out on a wave. Brown quickly establishes a playful tone that never mocks its subject but instead conveys a genuine affection for the sport. In a few minutes, he covers a few styles of surfing while also conveying some of the basic lingo while identifying a few of its superstars. Brown does this all so effortlessly that you aren’t even aware of it because you’re too busy being entertained. 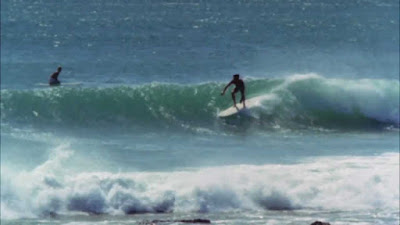 The Endless Summer takes us through some choice surfing spots in Hawaii and California and pretty soon Brown lays out his film’s premise: “Many surfers ride summer and winter but the ultimate thing for most of us would be to have an endless summer. The warm water and waves without the summer crowds of California. The only way to do this is by traveling around the world following the summer season as it moves around the world.” And so, the film documents two surfers from California – Robert August and Mike Hynson – who do just that. Brown introduces them in rather cheeky fashion as they read up for their first destination, Africa. August is shown reading a book entitled, Shark Attack: Field Dressings Illustrated, while Hynson is reading a Malaria manual. These books are obviously mock-ups done for comic effect.

August and Hynson arrive in Dakar, Senegal where Brown gripes about the $30/day each room rate (?!) at the government-sanctioned hotel that they’re forced to stay at. Fortunately, they find some tasty waves and there is a funny bit as August and Hynson try to explain to a taxi cab driver how to store their surfboards in his car. Many of the natives had never seen surfing before and the two young surfers were breaking new ground. Brown’s narration manages to be simultaneously informative and entertaining. For example, he points out how you could die in 15 minutes after stepping on a Stone Fish. He tempers this with shots of beautiful scenery, like a spectacular view of Cape Town from atop Cable Mountain. August and Hynson meet up with local surfers in Cape Town and travel along the Cape Peninsula.

One of things that strikes you about Brown’s voiceover narration is his way with words, like when he talks about a California surfing spot known as the Wedge: “Few people ride belly boards at the Wedge. Body surfing is bad enough because when you get wiped out it feels like your arms, legs and head are all going different directions. Add a belly board to that mess and it’s like an extra piece of shrapnel in a hand grenade.” As you would expect, there are lots of great slow motion shots of surfers catching fantastic rides on some really beautiful waves. Back in Africa, the guys meet some colorful characters, like a man named Terrence who catches animals for zoos and milks snakes for their venom. He is willing to drive hundreds of miles out of his way to take the two surfers to a sweet location for surfing. 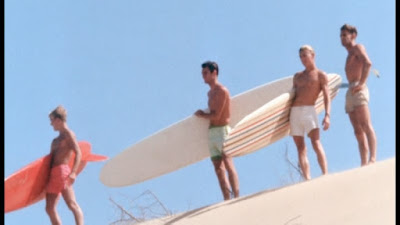 Next, August and Hynson go to Australia where we see the locals riding catamarans and Brown gets some breathtaking point-of-view shots of what it’s like to sail one. They pet kangaroos in Perth and search for waves all over Western Australia but to no avail so they go to Bells Beach near Melbourne and find out that the surfing is better during the winter season. The guys go fishing in New Zealand and surfing in Ragland on the west coast, enjoying extremely long rides.

Bruce Brown started surfing in the 1950s. He took still photographs to show his mother what the draw of the sport was. While serving in the United States Navy on Oahu years later, he used an 8 mm movie camera to photograph surfers from California. Once Brown got back there, he edited his footage into an hour-long film. Surfer Dale Velzy showed it at his San Clemente shop, charging 25 cents for admission. He bought Brown a 16 mm camera and together they raised $5,000 to make Slippery When Wet (1958), Brown’s first “real” surf film.
In the winter of 1958, Brown went back to Hawaii to film the North Shore’s big surf. On the plane ride over, the novice filmmaker read a book about how to make movies. Brown said, “I never had formal training in filmmaking and that probably worked to my advantage.” By 1962, he had spent five years making one surf film per year. He would shoot during the fall and winter, edit during the spring and show the finished product during the summer. Brown remembered, “I felt if I could take two years to make a film, maybe I could make something special.” To do this, he would need a bigger budget then he had on his previous films. To raise the $50,000 budget he needed, Brown took the best footage from his four previous films and made Water-Logged (1962).

While editing The Endless Summer, Brown was contacted by the band The Sandals who were hoping to sell one of their songs to him for use in the film. He was so impressed by their music that he wanted to use several of their songs. The group even toured with Brown and his film, providing live backing for his live narration. Not surprisingly, The Endless Summer was a big hit on the local west coast surfing circuit where it debuted at the Santa Monica Civic Auditorium during the summer of 1964 and played to sold-out crowds for a week. Paul Allen, the man responsible for arranging shows and coordinating publicity, thought that they could attract a national distributor. Brown took The Endless Summer to several Hollywood studio distributors but was rejected because they didn’t think it would have mainstream appeal. So, he took the film to where he felt would be the toughest proving ground: Wichita, Kansas in January. Moviegoers lined up in snowy weather in the middle of winter where the film went on to sell out its entire two-week run. Distributors still weren’t convinced and so Brown rented out the Kuyps Bay Theatre in New York City where his film ran successfully for a year. The Endless Summer was finally released nationally in 1966 where it proved to be a big hit both commercially and critically. 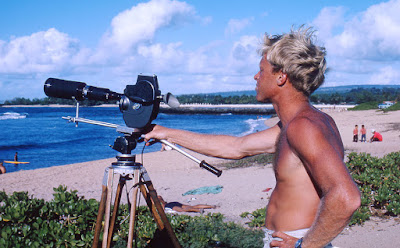 The Endless Summer faced with an uphill battle in the theater of public opinion. At the time, the national media regarded surfers as “beach bums” that were “anti-social” and “drug-induced.” Even one of the most influential magazines in helping shape public opinion in the 1960s, Time, jumped on the bandwagon with a January 1964 feature article entitled, “Shooting the Tube,” that linked surfing with drugs. To whit, “riding a board through the surf is a little like going on hashish.” Once middle America read these words, their mind was made up about surfing culture. However, Brown’s film changed all of this with its fun, positive image of surfing and surfers. August and Hynson weren’t hurting anyone or anything. They were just looking for the perfect wave.

The Endless Summer was well-received by critics of the day. Time magazine wrote, “Brown leaves analysis of the surf-cult mystique to seagoing sociologists, but demonstrates quite spiritedly that some of the brave souls mistaken for beachniks are, in fact, converts to a difficult, dangerous and dazzling sport.” Roger Ebert praised the film’s “beautiful photography” and compared it to Hollywood’s attempts at depict surfing culture when he wrote, “[it] almost makes you wonder if Hollywood hasn’t been trying too hard.” In his review for The New York Times, Robert Alden wrote, “the subject matter itself – the challenge and the joy of a sport that is part swimming, part skiing, part sky-diving and part Russian roulette – is buoyant fun.” Brown was pleasantly surprised by the critical reaction to his film: “For some reason the real entrenched film critics seemed to like it, maybe because it was different from what they were used to seeing.” The Endless Summer went on to gross more than $30 million. Not bad for a film that cost only $50,000 to make.

There is a wandering spirit, a searching for the perfect wave all over the world that makes The Endless Summer so enjoyable to watch. This isn’t just a series of montages of people surfing wave after wave. Brown has actually crafted a narrative that is part travelogue as he gives us a taste of exotic cultures all over the world. He also managed to craft a surfing film that is easily understood and can be enjoyed by the uninitiated while still having plenty of stuff for the seasoned surfer to enjoy which probably explains part of the film’s enduring appeal. The Endless Summer went on to launch and influence a whole cottage industry of surfing films, many of which did not impress Brown all that much who felt that they were “all bang-bang-bang, it’s all industrial. It’s all quick cuts and loud music.” 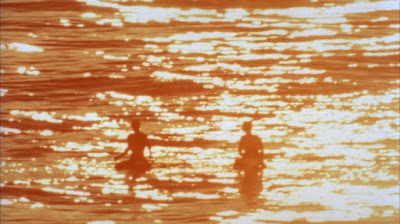