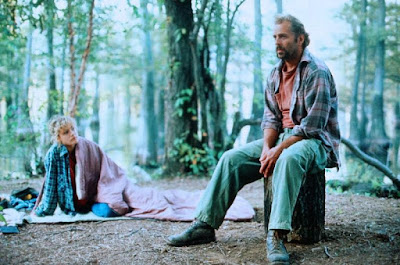 In the 1980s, I was obsessed with the Vietnam War. My gateway drug, as it was for a lot of people I suspect, was Platoon (1986). After seeing Oliver Stone’s film, I wanted more information. I read all sorts of books about the subject, from fiction like Going After Cacciato, about a soldier who goes AWOL, to memoirs like Chickenhawk, about a helicopter pilot’s experiences during the war. Hell, I even read the TimeLife books, collected Marvel Comics’ groundbreaking series The ‘Nam and watched television shows like Tour of Duty and China Beach. This fascination extended to depictions of the fallout of the war – how it changed the people that came back, men that suffered from post-traumatic stress disorder or from the effects of being subjected to Agent Orange while over there.

In the ‘80s, there were two excellent films that examined the lives of veterans after they returned home: the criminally underrated Robert De Niro/Ed Harris drama Jacknife (1989) and Norman Jewison’s In Country (1989). Jewison never wanted to make a film about the Vietnam War as it was a subject that he felt too strongly about – so much so that he left the United States in the 1970s because of it. However, he was drawn to Bobbie Ann Mason’s novel of the same name, which had been published in 1985 and went on to become a best-seller. It told the story about a teenage girl named Samantha Hughes (Emily Lloyd) and her quest to learn more about her father who died in the Vietnam War through her uncle Emmett (Bruce Willis), an emotionally scarred veteran.

The film was hyped as Bruce Willis’ first serious role where he finally dropped his wisecracking persona and really disappeared into a character. In Country received mixed reviews and was generally ignored by a movie-going public that was still not ready to deal with the deep-rooted effects of the war. They chose to ignore it rather than deal with it as the characters in this film do. 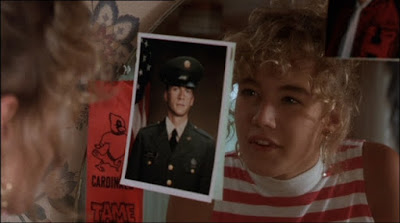 Jewison does a good job creating a sense of place, like in the brief scenes where we see Sam jogging to “I’m On Fire” by Bruce Springsteen as she runs through her hometown of Hopewell, Kentucky. One gets the feeling that it’s the kind of small-town where not much happens and not much has changed over the years. We meet Sam as she graduates from high school. Her daily routine consists of jogging in the morning and then hanging out briefly with Emmett and his fellow vets at a local diner. Talking to them piques her curiosity about the Vietnam War. She wants to learn more but Emmett isn’t too forthcoming with details and neither are his friends. There is this unspoken bond between them about not to bring it up.

One day, while going through her mother’s (Joan Allen) closet of old clothes from the 1960s, Sam discovers a box of letters her father wrote to her mother while he was in Vietnam. Reading them gives Sam some insight into a man she never knew. In her quest to understand what her father, Emmett and the others went through over there, she has a one-night stand with Tom (John Terry), one of her uncle’s war buddies. From this, she gets intimate insight into how emotionally damaged these guys are.

The veterans dance that Sam and Emmett attend illustrates, not just the tension that exists between the veterans and the town, but between the vets themselves. For example, Emmett and two other vets get into an argument about whether the war was winnable or not. It eventually boils over into a brief fistfight and Emmett is forced to act as peacemaker. We see the intense bond that exists between these men, a shared painful experience that no one who wasn’t there would understand. 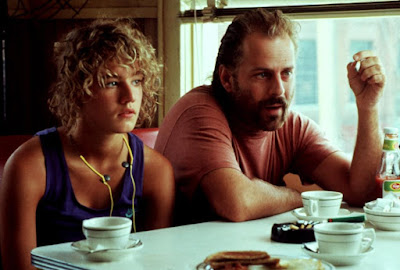 With his handlebar mustache and disheveled thinning hair, Bruce Willis looks nothing like what he usually did at the time in films like Die Hard (1986) or T.V. shows like Moonlighting. He does a fantastic job showing Emmett’s deep-rooted problems, from little things like wearing a skirt around the house, to big things like the traumatizing effect a particularly violent thunderstorm has, causing him to experience terrible flashbacks of a firefight he survived in Vietnam. Willis delivers a powerful monologue about what it was like for him in Vietnam and how he survived over there, as well as how he still lives with the painful memories. In this scene, he conveys an astonishing vulnerability and does some of the best acting of his career. His excellent performance hinted at future dramatic roles and showed that he had range as an actor. For perhaps the first time, Willis wasn’t afraid to mess with his good looks in order to become a flawed character, warts and all.

When In Country was being cast, Willis was looking for a role that would challenge him. He had just done four-and-a-half years of playing the same character on Moonlighting and wanted to do something different. When Willis first agreed to do the role he was concerned about it because he didn’t know right away how he was going to play it. However, the subject matter struck a personal chord with him because, as he said in an interview, “had things been a little different, or had I been a little older, this could have been my path.” During the war, Willis was actually drafted when he turned 18 but never saw action. Later on in the 1970s, he tended bar in New York City and would talk to veterans about their experiences in Vietnam. To help get into character and to prepare for the role, he gained 30 pounds. Willis spent four months making the film in Kentucky and said that it was the “kind of movie you travel along with and it leaves you wrenched out.”

It’s hard to believe that Emily Lloyd is British by birth judging from the authentic southern accent she sports throughout In Country. To prepare for the role, she stayed with a lawyer and his family in Paducah, Kentucky. Sam’s inquisitive nature and unflappable optimism comes in sharp contrast to Emmett’s jaded cynicism. At the heart of the film is the relationship between Sam and Emmett. Lloyd and Willis play well off each other and excellently portray two people who’ve known each other for a long time as evident in the verbal short hand between them and how they relate to one another. For the role of Sam, Jewison saw many American actresses between 16 and 22 but he kept coming back to Lloyd because, like her character, he found the actress, “bursting with life, almost manic in her energy.” 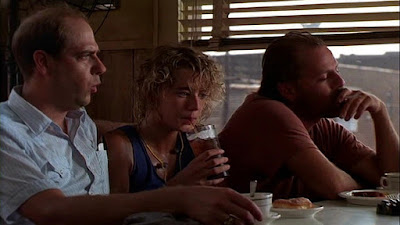 In Country was generally well-received by critics. Roger Ebert gave it three out of four stars and wrote, "The movie is like a time bomb. You sit there, interested, absorbed, sometimes amused, sometimes moved, but wondering in the back of your mind what all of this is going to add up to. Then you find out.” The Globe and Mail’s Rick Groen praised Emily Lloyd’s performance for being “letter perfect – her accent impeccable and her energy immense.” Like Ebert, USA Today gave the film three out of four stars and praised Willis’ "subsidiary performance as Lloyd's reclusive guardian-uncle is admirably short on showboating.” In his review for The Guardian, Derek Malcolm praised Lloyd for her "portrait is of a lively waif who does not intend to be easily defeated by the comedy of life without adding a few jokes of her own, and it is the most complete thing she has so far done on the screen, good as she was in Wish You Were Here.” Time magazine was more mixed in its reaction as it felt that the script "perhaps pursues too many banal and inconsequential matters as it portrays teen life in a small town," but that "the film starts to gather force and direction when a dance, organized to honor the local Viet vets, works out awkwardly." Furthermore, its critic felt that the film was "a lovely, necessary little stitch in our torn time.”

However, The New York Times’ Caryn James criticized the "cheap and easy touches ... that reduce it to the shallowness of a television movie," and found James Horner’s score, "offensive and distracting.” Newsweek magazine’s David Ansen wrote, "While one can respect its lofty intentions, the movie doesn't seem to have any better sense than its high-school heroine of just what it's looking for. At once underdramatized and faintly stagy, it keeps promising revelations that never quite materialize.” Finally, her review for the Washington Post, Rita Kempley wrote, "What's meant to be a cohesive family portrait, a suffering American microcosm, is a shambles of threads dangling and characters adrift. Jewison leaves it to stymied viewers to figure out the gist of it.”

Not much happens plot-wise but that’s okay because In Country’s narrative is driven by its characters. It is one of those slice-of-life films about a girl trying to figure out who her father was and understand what her uncle went through. The film is leisurely paced as it allows us to get to know these interesting characters and the world they inhabit. The dialogue is well-written and really sounds like the way people talk. It’s not showy but honest and heartfelt. 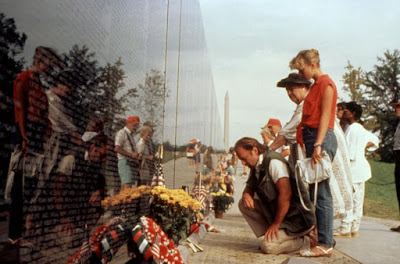 In Country helped satiate my obsession with the Vietnam War and helped bring me some closure as I related to Sam’s own interest in the subject and quest to understand it. By the film’s end, I felt like I understood it a bit more, much like Sam. The film’s emotional payoff comes at its conclusion when Sam and Emmett go to the Vietnam Veterans Memorial in Washington, D.C. As they walk past all the names engraved on this impressive monument, it’s hard not to be affected by it and I can only imagine what it must be like in person. Jewison described the place as “the most sacred shrine in America” and called it, “the Wailing Wall of America.” It’s a moving scene done with very little dialogue, just simple gestures that convey more than any fancy speech could, and this is as good a way as ever to end the film on a poignant note. Ultimately, In Country points out that the healing process is long overdue and as a country the United States needs to come to terms with the Vietnam War and finally embrace the people who fought in it, not just those that died over there but the ones that made it back and are still living with it every day of their lives.

Groen, Rick. “Willis and Jewison Circulate with the Story of In Country’s Filming.” The Globe and Mail. September 9, 1989. 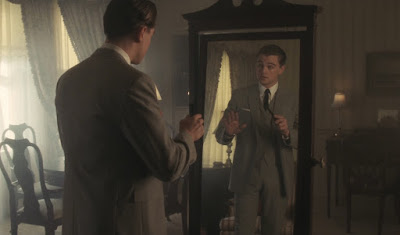