DVD of the Week: Up in the Air 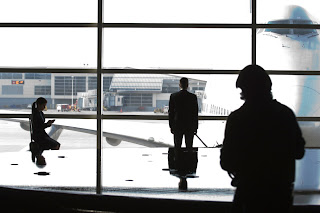 With the phenomenonal success of Juno (2007), director Jason Reitman could have easily faded into obscurity and been labeled a one-hit wonder. Undaunted, he followed up that film with the equally successful Up in the Air (2009), which, like his previous effort, was a critical darling due in some part to its timely subject matter. It was quickly pegged as an early Academy Award contender and sure enough garnered six nominations. However, it was shut out completely thanks in large part to Precious (2009) and The Hurt Locker (2008). Regardless, Up in the Air struck a chord with audiences and gave George Clooney another choice role to add to his already impressive career.
Ryan Bingham (George Clooney) is a professional hatchet man. Companies too squeamish to do it themselves hire him to come in and fire an employee. He has the slick charm to cushion the blow but it means nothing to him because it’s just a job – no more, no less. Because of the nature of his work, Ryan leads a nomadic existence, essentially living out of a suitcase as he crisscrosses the country racking up the frequent flyer points and seeing more of the insides of airports and hotel rooms than wherever he calls home. Ryan’s philosophy of life basically boils down to a question he asks at the seminars he gives: “How much does your life weigh?”
Ryan keeps his life simple – he has no attachments. All he has is his work and that suits him just fine. During his travels he meets Alex (Vera Farmiga), a beautiful woman and fellow veteran business traveler. They have a fling and schedule another rendezvous as if they were penciling in an upcoming meeting. Ryan’s boss (Jason Bateman) assigns him a partner, a young woman by the name of Natalie Keener (Anna Kendrick) who has found a way to do his job cheaper and more efficiently. This is achieved by firing people remotely via video conferencing on a computer. This approach threatens Ryan’s entire way of life. While Natalie may have confidence and smarts, she lacks experience and so he is instructed to take her on the road and show her the ropes.
With his seemingly limitless reservoir of charisma, George Clooney is well cast as a smooth talking businessman. There is a scene where Ryan and Natalie tell a man (J.K. Simmons) that he’s fired and she says the wrong thing. The already upset employee vents his frustration and this upsets her confidence. With his years of experience, Ryan turns things around and actually convinces the guy that he being fired will now allow him to follow his dreams. The way Clooney masterfully does this is fascinating to watch. After all, if you had to be fired wouldn’t you want him to do it?
Supporting Clooney is Anna Kendrick and Vera Farmiga as the two women that unexpectedly enter Ryan’s life and show him that there is more to life than traveling business class and living out of a suitcase. Kendrick, fresh from her small role in the Twilight films and capitalizing on the promise she showed in Rocket Science (2007), she gets some decent screen time to demonstrate her acting chops. On the surface, Natalie is confident and ambitious but when Ryan takes her on the road, she realizes that it’s not so easy firing someone to their face. Kendrick conveys this realization really well. 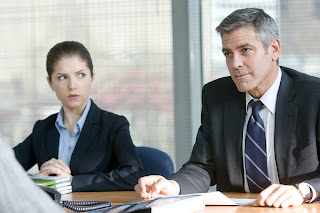 Ever since making a notable impression in the male-dominated Martin Scorsese crime film The Departed (2006), Farmiga has done all kinds of roles and brought an intensity that is always interesting to watch. She’s at her most engaging here as Clooney’s love interest. She brings a warmth and humanity to Alex that makes it easy to see why Ryan is attracted to her. Alex is smart and sexy as well as confident in her own skin. She knows what she wants and this also draws him to her.
In some respects, Up in the Air mixes elements of The Accidental Tourist (1988) and Lost in Translation (2003). Like the former, Ryan has his own philosophy of travel, complete with rituals and tricks of the trade that make it more efficient. Like the latter film, Ryan is something of a lonely soul who makes a connection when he least expects it. Most significantly, Up in the Air is a reflection of the times we live in. It reflects the terrible shape our economy is in with massive layoffs happening in every sector. Reitman’s film shows the damage that has been done and continues to be inflicted on everyday people. And yet the film offers some glimmer of hope by hinting at Ryan’s possible redemption. Up in the Air suggests that what gets us through the tough times is the support and love of others, be they siblings, friends or significant others. We all need that human connection. Reitman’s film doesn’t give us any easy answers and is not exactly the feel-good film of the year, but you do feel that Ryan has changed. Whether it’s for the better or for the worse remains to be seen but at least he has experienced an alternative to his routine existence.
Special Features:
There is an audio commentary by writer/director Jason Reitman, director of photography Eric Steelberg and first assistant director Jason Blumenfeld. Reitman talks about how the economic recession affected the tone of the film. Originally, the montages of people being fired were to be satirical but he realized that this was no longer funny anymore. The three men tend to put an emphasis on the nuts and bolts of filmmaking, like the challenge of shooting in airports including the lengthy process of getting permission to shoot in them. Reitman is quite energetic and, not surprisingly, guides this track, prompting the other two participants with questions.
“Shadowplay: Before the Story” is a brief featurette on the company that created the opening credits sequence. In fact, they have worked on all of his films. They talk about the desired effect that they wanted to achieve. 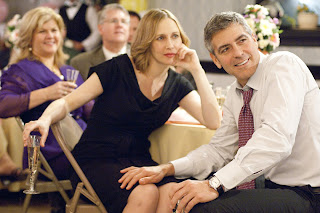 Also included are five deleted scenes with optional commentary by Reitman. There is more footage of people being fired. We also see more of Ryan and Alex connecting at a party which is nice to see. There is more of Ryan finally making a home base for himself. There is a dream sequence that seems out of place and was rightly cut. Reitman puts this footage in context and briefly explains why he ultimately removed it from the picture.
Finally, there are teaser and theatrical trailers.
at March 18, 2010