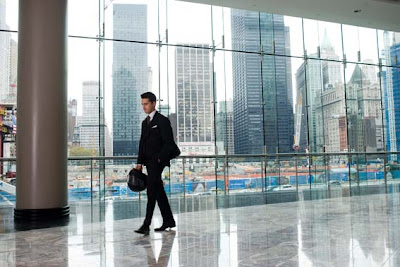 BLOGGER'S NOTE: This post originally appeared over at Edward Copeland's blog, Edward Copeland on Film. You can also access my article on the original film, here.

It has been over 20 years since Wall Street (1987) was released in theaters and, at the time, it was blamed for cashing in on the stock market crash that wiped out more than a few people’s fortunes. The financial landscape has changed radically since then and so, in many ways, has Oliver Stone’s career. In the 1980s and early 1990s, he was on an unbelievable roll, cranking out controversial, headline-grabbing films like Platoon (1986), JFK (1991) and Natural Born Killers (1994). And then he made Nixon (1995), arguably his most ambitious and complex (both stylistically and content-wise) film to date – critics were divided and audiences failed to show up.


Stone continued to plug along gamely but after his long-time director of photography Robert Richardson left after the neo-noir oddity U-Turn (1997), the director lost his most important creative collaborator. Any Given Sunday (1999) was an energetic if not flawed expose of professional American football and well, let’s just say that the 2000s have not been kind to him (see Alexander, World Trade Center and W.). With the release of Wall Street: Money Never Sleeps (2010), there’s a glimmer of hope that this new project might be a return to form for the auteur. He’s never done a sequel before but with how radically the financial world has changed since 9/11 it is an intriguing prospect to see what a character like Gordon Gekko would be doing now. With recent scandals like Enron and Dow Jones meltdown in 2008, a Wall Street sequel is very timely.

It’s 2001 and Gordon Gekko (Michael Douglas) has been released from prison. There’s no one to pick him up and instead he’s handed a check for $1,800 and a train ticket. Seven years later, he’s peddling a book, Is Greed Good? and trying to get back into the game. Meanwhile, Jacob “Jake” Moore (Shia LaBeouf) is a young and ambitious proprietary trader working Keller Zabel. This whiz kid is trying to develop an alternative energy project. Stone immerses us in the trading floor and boy, does it look different than it did back in 1987. The technology, obviously, is vastly different but the frenetic energy is still the same. Jake is living with and engaged to a beautiful young woman named Winnie (Carey Mulligan) who is an Internet journalist working for a liberal-minded website. Oh yeah, her estranged father just happens to be Gekko, much to her chagrin.

When Jake’s investment firm’s stock takes a major hit, his distraught and disillusioned mentor Lewis Zabel (Frank Langella) is pushed out of the company by ruthless hedge fund manager Bretton James (Josh Brolin). Devastated and humiliated, Zabel takes his own life. Jake goes to see Gekko speak and is impressed by what the man has to say. Maybe he’s found a new mentor. Afterwards, Jake meets Gekko and tells him about his plans to marry Winnie. They strike a deal: Jake will help Gekko reconcile with his daughter and in return Gekko will help Jake exact some payback on James, the man who sent Zabel over the edge. 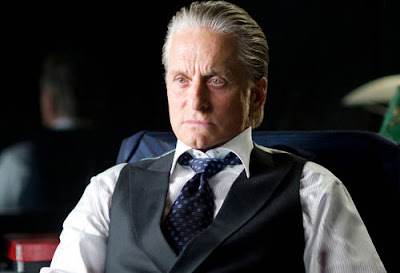 With Gekko’s help, Jake does some digging and spreads a few rumors that cause Churchill Schwartz, the company that James works for, to take a notable hit. Impressed by what he did, James hires Jake because after all, keep your friends close and your enemies closer. Jake naturally accepts as it brings him in close proximity to James so that he can ultimately bring him down. And like that, it’s on with Jake and James going after each other with Gekko as the wild card, begging the question, what is his stake in all this?

Shia LaBeouf, an actor known for mindless blockbusters (Transformers and Indiana Jones and the Kingdom of the Crystal Skulls) and generic thrillers (Disturbia and Eagle Eye), finally shows some actual acting chops in his first legitimate dramatic role that has him up against heavyweights like Michael Douglas, Josh Brolin and Frank Langella – guys that can really act. Being in their company forces LaBeouf to raise his game and he holds his own. This time around, it is LaBeouf who is the idealistic young man swimming with the sharks and in danger of being seduced by lots of money.

It is great to see Michael Douglas back in his most famous role and he slips back into it effortlessly. Gekko is as cagey as ever and like Jake we’re never quite sure what his true intentions are but one thing’s for sure, he’s not to be underestimated. And Douglas does a nice job hinting at the dangerous Gekko that lurks under his smiling façade. Gekko appears to want to make amends with his daughter but as we well know from the first film, he has more than a few tricks up his sleeve and with all the cunning of an exceptional card player.

Josh Brolin plays a smug, cigar-smoking shark with no heart. He’s a grinning, deliciously evil bad guy. Carey Mulligan doesn’t have much to do but does a fine job with what she has to work with, especially a scene where Winnie and Gekko finally have it out over how his dirty financial dealings destroyed their family. One of the weak spots of the original Wall Street was Bud Fox’s relationship with his love interest, a vapid interior designer, and Stone tries not to make the same mistake with this film by casting a stronger actress with Mulligan and by placing a bigger emphasis on the relationship between Jake and Winnie. However, the film stalls when the focus shifts to them when we really should be tracking Jake plotting revenge on James.

The screenplay throws all kinds of financial jargon at the audience but it is all really window-dressing because all that matters is what it all means and Stone makes sure that we understand the bottom line. The dialogue still has some of the crackle and pop of the original film, especially in a good scene where Gekko and James spar verbally. If there is one glaring flaw in this film it is the overuse of David Byrne songs to the point of distraction. Each cue puts too fine a point on the scene with lyrics that spell out exactly what we are watching. Not to mention the songs are milquetoast drivel robbing the film of its fast-moving momentum at times. Also, the warm, cuddly vibe of the epilogue that plays over the closing credits has got to go. It shows Gekko in a way that just seems out of character and feels like Stone hedged his bets to give the audience a more palatable ending. 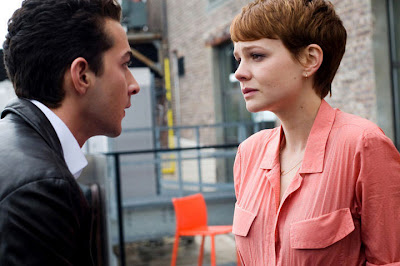 Stone does a good job of keeping things visually interesting but the cinematography lacks the energy and that special something that Robert Richardson brought to the first film. Wall Street: Money Never Sleeps is easily the best film Stone’s done since Any Given Sunday. Of course, that’s not saying much but at least it feels like the kind of film Stone used to make back in his prime. There is a confidence that comes with being back on familiar turf that Stone displays with this film. Wall Street: Money Never Sleeps is just the kind of film that he needs to reinvigorate his career and remind us why we regarded his films so highly in the first place.
at September 30, 2010