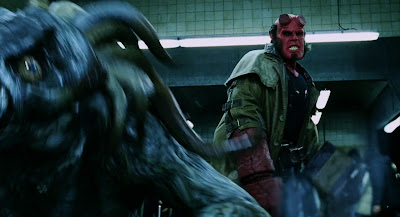 The success of X-Men (2000) and Spider-Man (2002) opened the door for a new wave of comic book adaptations. In the past, studios have played it safe and only green-lighted adaptations of mainstream comic books with large followings. However, this changed with adaptations of independent fare like Ghost World (2000), American Splendor (2003), and with Hellboy (2004). Based on Mike Mignola’s comic book of the same name, the title has a dedicated cult following at best so it was a pleasant surprise to see a major studio take a big budget gamble with it.

October 1944. The Nazis have begun mixing science with black magic in a desperate attempt to regain the advantage in World War II. The seemingly invincible Russian, Rasputin (Karel Roden) has teamed up with the Germans and plans to open a portal to another dimension and bring about an apocalypse. However, American troops arrive and disrupt the procedure just in time. In the process, something comes through: a red-skinned demon baby that the soldiers adopt and call Hellboy.

With the World War II prologue, director Guillermo del Toro does two important things: he vividly introduces this colorful world and the characters that inhabit it by creating just the right moody atmosphere and with detailed production design and excellent special effects. Secondly, Del Toro establishes the film’s mythology and what exactly is at stake through a clever mix of science fiction and the supernatural. He does this via an exciting action sequence as a young Dr. Broom and U.S. soldiers confront Rasputin and the Nazis. 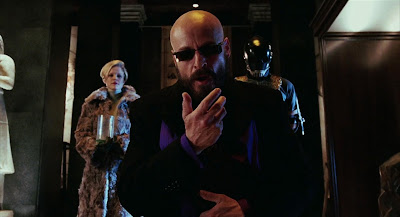 Present day. Rasputin has been resurrected and continues his plans to summon destructive supernatural forces that will result in the end of the world. Hellboy (Ron Perlman) has matured (sort of) and now works for the Bureau for Paranormal Research and Defense (BPRD) in New Jersey — under the guise of a waste management company (just like Tony Soprano). Along with Abe Sapien (Doug Jones with an uncredited David Hyde Pierce doing the voice), an amphibious humanoid (“the fish guy” as a guard puts it), firestarter Liz Sherman (Selma Blair), and the token “normal guy,” John Myers (Rupert Evans), Hellboy tracks down Rasputin and tries to prevent him from fulfilling his nefarious goals.

Del Toro, a die-hard comic book fan and self-described film geek, shoots the action sequences much like he did in Blade II (2002), with crazy camera angles and fantastically choreographed fights. Case in point, Hellboy’s extended tussle with Sammael (Brian Steele). It’s like Del Toro took panels right out Mignola’s comic book and made them move but with the same kind of explosive energy that made Jack Kirby’s art so exciting. Del Toro also has incredible production design at his disposal to create a fully realized world rich in detail and drenched in atmosphere. He is heavily influenced by Italian horror films and not only references Mario Bava’s Black Sunday (1960) but also the saturated primary color scheme of Dario Argento’s Suspiria (1977) to name just a couple of examples. This is a great looking film, from the warm colors and ornate architecture of the library where Abe Sapien resides, to the darker, colder colors of Rasputin’s mausoleum in Moscow.

Del Toro was shooting Mimic (1997) and discovered the Hellboy comic book but never thought that it could be made in Hollywood and if it did they would ruin it. He heard that it was going to be adapted into a film at Universal Pictures and started writing a screenplay in 1997. He met Mike Mignola when they worked together on Blade II which they used as their “rehearsal” for Hellboy. They found out that they read the same comic books and pulp and classic gothic horror novels. With Hellboy, Del Toro wanted to make a self-contained film, “almost a fairy tale, a fable.” His original pitch to executives at Sony-based Revolution Studios was that both The Mask (1994) and Men in Black (1997) were comic books that they were not familiar with and yet went on to become extremely successful films. He told them that the same thing could happen with Hellboy. In April 2002, Del Toro’s film was given the green-light at a budget of $60 million. 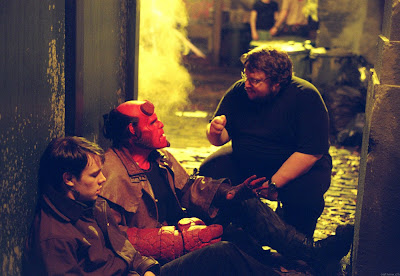 Del Toro first saw Ron Perlman in Quest for Fire (1982) and then The Name of the Rose (1986) and was very impressed with his acting, so much so that he ended up casting the actor in his first film Cronos (1994). Del Toro initially wanted him to play Hellboy but Vin Diesel was a rising star at the time and so the director approached him instead for the role. However, with the move from Universal to Revolution, Diesel dropped out of the picture and Perlman was in. Early on, if the actor didn’t work out, Del Toro thought about making Hellboy a mixture of puppet and computer graphics. He talked to James Cameron who warned him that if he went that route he would lose the love story. Del Toro wisely decided to stick with Perlman.

Perlman is perfectly cast as the cigar smoking, two-fisted action hero who eats Baby Ruth candy bars and loves cats. He does a great job of capturing Hellboy’s sarcastic, wise-cracking nature. Perlman gets to utter cool one-liners and looks fantastic in his make-up (thanks to legendary makeup artist Rick Baker). Often, what makes it to the film rarely resembles what was drawn in the comic book. Not the case here — Perlman IS Hellboy. With this role, he firmly established himself as one of the cult film icons of the new millennium (much like Bruce Campbell was in the 1990’s). Perlman has got the drop-dead cool action hero shtick down cold. With his hulking, imposing physique, he’s Arnold Schwarzenegger with brains and irony.

Del Toro cast Selma Blair because he always saw a “haunting quality in her eyes and in her look. Sort of a doomed, gothic beauty in her.” He was a fan of The Larry Sanders Show and felt the Jeffrey Tambor had that “smarmy, wannabe bureaucratic presence” that was ideal for Tom Manning. He cast Tambor against type and wanted him to be an “absolute asshole in the beginning, and play it straight.” Del Toro and Mignola created the character of Myers to guide audiences into Hellboy’s world. The director interviewed a lot of young Hollywood actors but many of them were “just too cute and too Calvin Klein beautiful to put in the movie.” He liked Rupert Evans because he had “such an open face, and he had a real innocence about him.” Del Toro saw John Hurt in Love and Death on Long Island (1997) and felt that the actor had “that little air of tragedy about him” that suited Professor Bruttenholm. 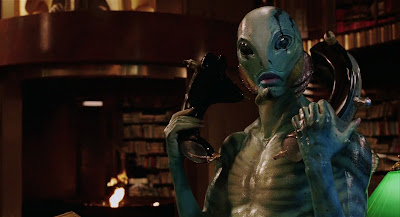 Hellboy received mostly positive reviews from critics. Roger Ebert gave the film three-and-a-half stars out of four and praised Ron Perlman’s performance as “an actor who is not just playing a superhero, but enjoying it; although he no doubt had to endure hours in makeup every day, he chomps his cigar, twitches his tail and battles his demons with something approaching glee. You can see an actor in the process of making an impossible character really work.” Entertainment Weekly gave the film a “B” rating and Owen Gleiberman wrote, “Del Toro, the former art-house creep-meister turned megaplex fantasist, knows just how long to hold a shot of blood oozing through an ornate stone maze or ghouls flying through a ghostly museum so that we feel as if the sets and effects are serving the story rather than the other way around.” In his review for The New York Times, Elvis Mitchell wrote, “What distinguishes Hellboy from the pack and gives it squirmy, ferocious life is the environment that Mr. del Toro creates on screen. The movie is lubricated with a fluid, slimy menace, and the director's love of rotted, desiccated flesh and exposed, traumatized organs adds an engrossing grossness. But a contrasting vulnerability has also been slipped in, a critical addition.” The Village Voice’s J. Hoberman wrote, “A nonstop Ragnarok of teenage crushes and constant squidicide, Hellboy ends on a note of pure romantic ecstasy. One would have to be further removed from adolescence than me to be unmoved by the spectacle of two love-starved paranormals consumed in the blue flambé of their Baked Alaska kiss.”

In her review for the Los Angeles Times, Manohla Dargis wrote, “There's no shortage of slick special effects and rampaging monsters here. Yet what catches the eye and captures the imagination is the lovingly hand-crafted feel of the design, the sensuous swirls etched into Hellboy's torso, the dusty clutter of the professor's office, the queasy algae-green of a locked hospital cell.” Sight and Sound magazine’s Kim Newman wrote, “It may offer a big battle too many, but Hellboy succeeds because it brings the visuals from the page to life with a beating red heart.” One of the rare dissenting opinions came from USA Today’s Claudia Puig who wrote, “Hellboy's special effects don't offer much of anything new, its far-fetched plot leaves a bit to be desired, and there is plenty that flat-out doesn't make sense. Those unfamiliar with the comic book may leave the theater bedeviled and scratching their heads.”

Hellboy is one of those rare comic book movies with depth. It takes time to develop its characters and the relationships between them. There is the touching father-son relationship between Hellboy and Bruttenholm and the romantic love triangle between Hellboy, Myers and Liz. While the film has the requisite slam-bang action sequences, it is not dominated by them. The film is not driven by them but rather by the characters and the story. And this is because Del Toro has strong source material to draw from: Mignola’s comic book, in particular “Seed of Destruction,” which chronicles Hellboy’s origins. Both Del Toro and Mignola’s works are steeped in the gothic and horror genres, in particular the fiction of H.P. Lovecraft. The author’s influence is all over this movie as Hellboy trades blows with Cthulhu-inspired creatures that would make ol’ Lovecraft proud. While Del Toro’s film didn’t exactly rack up the kind box office numbers the studio was hoping for, it did prove to be quite popular on home video and eventually spawn an even better sequel in 2008. 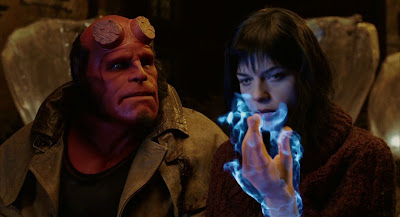