DVD of the Week: The Way Back 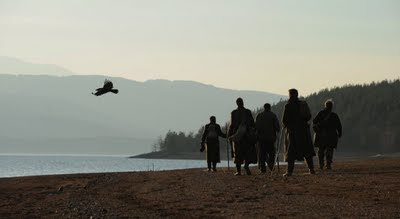 Has it really been seven years since Peter Weir released a film? For fans of his work, the arrival of a new film has been long overdue and eager anticipated. Sadly, the kinds of films he makes are no longer what Hollywood is interesting in backing and so he’s had to look elsewhere for financing – hence the time between projects. He returns with The Way Back (2010), a fictionalized depiction of seven prisoners that escaped from a horrible Siberian Gulag camp during World War II. The group made an incredible 4,500-mile treacherous journey across some of most extreme terrain imaginable. Weir’s film received generally positive reviews but wasn’t given enough distribution or coverage to garner any of the big awards but will hopefully find new life on home video.


In the camp, Janusz (Jim Sturgess) befriends Khabarov (Mark Strong) and they bond over the trumped up charges that sent them to the Gulag. The prison conditions are truly awful and Weir shows what these men do at night to help pass the time and keep their sanity. It is no wonder that Janusz yearns to escape. He and Khabarov plot a way to get out and survive. To aid in their ambitious endeavor, Janusz enlists the help of a brave American named Smith (Ed Harris) and Valka (Colin Farrell), a notorious Russian criminal as well as four other men.

Early on, one of the Gulag prison guards tells his charges, “Nature is your jailer, and she is without mercy.” Weir’s camera pans over the harsh, snowy wilderness that is Siberia. The message is clear. Even if you escape from the camp, the foreboding environment will surely kill you. Moreso than any other film of his, Weir emphasizes the effect of the environment on the characters, from the bitterly cold blizzards to the dirty, claustrophobic hell of the mines, to the vast, sun-baked desert. The seven men endure all kinds of hardships – the weather, wild animals and starvation and dehydration. However, the alternative – certain death in the Gulag – is a worse option.

There is a humanistic streak that runs through much of Weir’s films and The Way Back is no exception. Janusz is the heart and soul of the group, looking out for everyone and leading them through the wilderness. These men are dependent on each other to survive and Weir shows how they relate to one another under such extreme conditions. They are pushed to the very limits of human endurance and this is depicted in unflinching detail by Weir. Despite being very different people, they exhibit compassion towards one another that is inspiring but not in a cheesy way thanks to Weir’s understated direction. 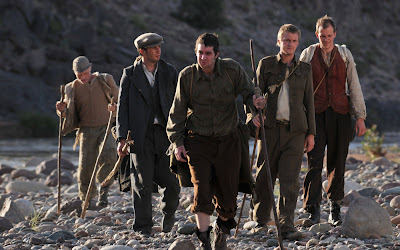 The Way Back is another strong effort from the Australian filmmaker with solid performances from a uniformly excellent cast that includes well-known veteran actors like Ed Harris and Colin Farrell and relative unknowns like Dragos Bucur and Alexandru Potocean. They breathe vivid life into these fascinating characters. This film is a potent reminder of how poorer cinema has been in Weir’s absence. It is refreshing to see a film about something, populated with compelling characters instead of relying on clichéd dialogue and an overabundance of CGI. The Way Back is about compassion and humanity – things that we are in short supply of – and how it helped these men on this incredible journey.

“The Journey of the Journey” is a 30-minute making of featurette. Weir and the cast talk about what drew them to the project – the lack of knowledge about the Russian gulags because it was not as well documented as the Nazi concentration camps. There is plenty of behind-the-scenes footage as key crew members talk about their contributions to The Way Back.