Nicholas Ray Blogathon: Rebel Without a Cause 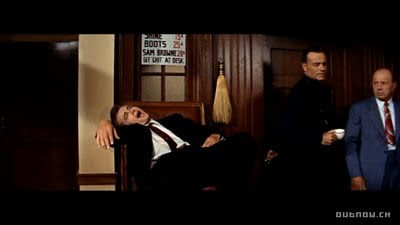 BLOGGER'S NOTE: This post is part of the Nicholas Ray Blogathon run by Tony Dayoub over at Cinema Viewfinder.


"What can you do when you have to be a man?"
- Jim Stark
When Nicholas Ray's Rebel Without a Cause was first released in 1955, critics read the film as a statement on how the confused, misunderstood youth of the day viewed society. The film was labeled a juvenile delinquent picture with its star, James Dean, becoming a spokesman for disaffected youth everywhere. Rebel Without a Cause can also be read on a more oblique level. The film presents a classic Oedipal narrative in the form of Jim Stark's dysfunctional family where the mother (Ann Doran) is seen as overpowering presence who dominates all the males, in particular the father (Jim Backus). Jim (James Dean) throughout the film searches for an ideal father figure to look to for guidance, to show him what it takes to "be a man" and to understand what constitutes an ideal man.


Early on in the film Ray shows how Jim's family life operates. Pulled in for public drunkenness, he confronts his parents who arrive to bail him out. Jim's mother and grandmother (Virginia Brissac) dominate the conversation with the former questioning everything the father says. Jim is clearly agitated by this "zoo," as he later tells Ray Fremick (Edward Platt), the tolerant police officer, but is unable to do anything because of his father's weak will. Once alone with the Ray, Jim reveals that his family avoids any problems, moving when Jim gets into trouble. As Jim remarks, "they think they can protect me by moving around." Ray gets Jim to open up and admit that his parents are the real source of the problem when he says, "She eats him alive and he takes it." Jim sees his father as a weak man who cannot stand up for himself. As Jim sees it, if his father would only stand up to his mother, "and knock mom cold," and be a man, then he would feel more confident about his family and himself.

Ray constantly stresses the powerful presence of the mother figure throughout this scene by not only showing an actual conversation between all the family members, where she clearly dominates, but even when Jim is removed from them. He spies at them through a peephole in the Fremick's office and sees that his mother is still hounding his father. No matter how hard he tries, Jim cannot escape his mixed up family life. Ray shows that the police officer can still be strong, but also gentle and kind to the young man by having the lawman change his attitude partway through their conversation. The cop seems strict and uncaring at first, but after Jim cools off he is understanding and helpful. Fremick is presented as a stronger, more attractive male role model for Jim to follow than his own father who cowers under the glare of his wife. This scene also verifies Jim's lack of a strong male role model. His father is clearly not Jim's idea of an ideal man and he says as much when he tells Fremick, "I never want to be like him." Jim must somehow fill this void and resolve his situation at home.

Ray presents several tests of masculinity in Rebel Without a Cause that Jim must solve and lead to a solution to his lack of a male role model. One such test is the "chickie run" that Jim has against Buzz Gunderson (Corey Allen). The "chickie run" is clearly a test of honor, a test of manhood that Jim must face, and he looks to his father for help when he asks, "What can you do when you have to be a man?" This line seems almost comical as his father is shown wearing an apron over his suit and carrying a tray of food to his sick wife. Jim's father hardly fits the ideal image of a "man" in his ridiculous state. To further complicate matters, the father cannot answer Jim's question. Instead, he merely babbles on about nothing and Jim flees the house in frustration to face his test without any guidance from anyone. He must rely on his own instincts because his father cannot even give him advice. The apron gives Jim's father a more feminized appearance that confuses Jim even more. Jim must become his own man as he has no one else to show him how. 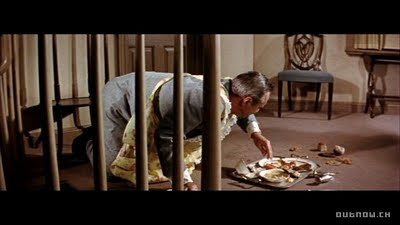 After the disastrous "chickie run," Jim returns home and tells his parents what happened. Tired and confused, Jim wants desperately to engage his dozing father in a conversation, but is interrupted by his mother. Ray depicts the confusion of Jim's character in this scene by showing the mother's entrance from Jim's point of view. Jim sees his mother coming down the stairs, upside down, the camera moving in counter-clockwise fashion until righted with a 180 degree pan. The mother is clearly intruding on the talk between Jim and his father. Jim becomes trapped by his parents during the course of this "three-way verbal brawl." Once again, the mother eclipses the conversation, blaming Jim for all the moving around they have done. Ray emphasizes the mother's dominate position by placing her on the staircase looking down at Jim and her husband. A low angle shot is also used so that she towers over the two men even more, making them look impotent and insignificant. Jim looks to his father for guidance, to stand up for him, but he is too weak in the face of such overwhelming superiority. Jim explodes in Oedipal rage and begins strangling and in effect, "killing" his own father. His mother intervenes and Jim blindly runs out into the night.

Another test of masculinity that Jim faces in the film is his relationship with Plato (Sal Mineo). From the start of the film it is clear that Plato also lacks a strong father figure. In fact, Plato lacks both a father and a mother with only an African American housekeeper (Marietta Canty) to help him grow up. Throughout the film Plato gazes longingly at Jim with almost homoerotic intensity. Plato's gaze symbolizes his desire for a idealized father figure that first manifests itself in the form of a picture of Alan Ladd in his locker, and which later is transferred to Jim. This transfer takes place at the "chickie run" when Plato talks to Judy (Natalie Wood) about Jim. Plato begins talking about Jim as if he were already his father when he tells Judy that "maybe next Sunday he'll take me fishing." Plato sees Jim as a father he never had and wishes he had, and he says as much to Jim after the "chickie run." Jim rejects this classification and leaves Plato to go back to his empty home. Jim cannot be a surrogate father to Plato when he does not even know how to be a man himself. Ironically, Plato does not see Fremick at the beginning of the film like Judy and Jim, which may account for his death at the end of the film. Plato was not shown the kindness and understanding that Judy and Jim where and this results in his own destruction.

Perhaps the most telling point in the film is when Jim, Judy, and Plato take refuge in an old, abandoned mansion. Ray takes this opportunity to comment on the whole notion of family and an ideal man. Upon arriving at the mansion, the three teenagers take a mock tour of the site with Jim and Judy posing as newlyweds and Plato acting as a tour guide. Everyone hams up their respective roles, presenting a mock parody of the family as they act out their idea of their parents' attitudes towards them. Jim and Judy become Plato's family as in reality he has no family save a housekeeper. When Judy does ask about Plato's family, in particular his father, he replies, "He was a hero in the China Sea." Jim realizes that Plato is lying, that this is only an idealized image of a father he wishes he had. Later, when Jim and Judy are alone, she reveals that Plato was talking about him in the same way, that he wishes Jim was his father. This statement reinforces the belief that Plato views Jim and Judy, particularly Jim, as parental figures, the only people he can look to for direction in his life. Judy also tells Jim her idea of the perfect man as someone who "can be gentle and sweet," but also strong. She could easily be describing Jim who has both a strong, masculine side as shown in the knife fight and the "chickie run," and a gentle, sweet side when he is with her or Plato. Judy could also be describing Fremick, the police officer who is also seen at the beginning of the film to be strong and masculine in dealing with both Judy and Jim while also being understanding and sympathetic to their plights. 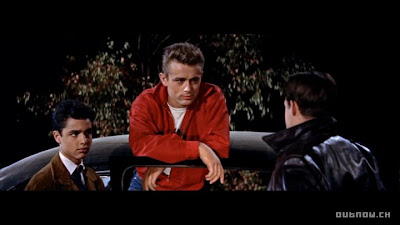 At the end of the film Judy and Jim survive, but Plato is gunned down by the police. Jim and Judy's situations are salvageable because they belong to families, as dysfunctional as they may seem, they are complete families with the possibility of resolution. Plato has no family and no way out of his problems and therefore cannot exist in the same world. In consoling Jim, his father says, "you did everything a man could." It is the first time that Jim's father has supported his son and mentioned being a "man." The father not only supports him verbally, but physically as he comforts the sad youth, lifting him to his feet. To reinforce this support he reassures his son, "you can depend on me, trust me ... Stand up and I'll try and stand with you." It is the first step for both of them. They must learn and become men together.

On the surface, Rebel Without a Cause can be read as juvenile delinquent film, but underneath this facade, its director, Nicholas Ray, has made a film about the nuclear family in the 1950’s. Ray presents a family that is not the ideal image as shown in a sitcom like Leave to Beaver, but one that is matriarchal in structure. Jim Stark is a confused youth who looks to his parents, in particular his father, for help, but instead finds more confusion and questions. By film's end, Jim has had to deal with his problems on his own, until they get too big for him to handle alone. Now, he has help in the form of both Judy who loves him and his father who is willing to stand by him no matter what happens. They are now Jim's support group who will teach him how to be a "man," Judy developing the kind, gentle side, while the father developing his strong, masculine side. Plato dies because he has no such support group. He is the "other," neither masculine nor feminine, with no real family, just an artificial one in the form of Jim and Judy. Plato does not conform to the notions of what an ideal man should be and therefore dies as a result. The ideal man in Rebel Without a Cause is presented in the form of Ray Fremick, who is seen as a strong, masculine figure, while being sympathetic and understanding as well. By the resolution of the film, Jim Stark is well on his way to possessing these attributes with the help of Judy and his father.