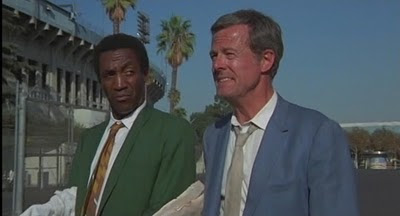 It has been well-documented how the 1970’s were a golden age for American cinema with many risky and unusual films being made and released through a Hollywood studio system in disarray after the surprise breakthrough success of Easy Rider (1969). One of the lesser-known gems from this era is the gritty detective film Hickey & Boggs (1972). Directed by actor Robert Culp, it is notable for reuniting him with comedian Bill Cosby, both of whom enjoyed considerable success on the popular 1960’s television series I Spy. People expecting the same kind of fun, exciting vibe from that show to be carried over to this film would be very disappointed as Culp served up a dark, violent tale of two down on their luck private investigators who get in way over their heads.


Al Hickey (Bill Cosby) and Frank Boggs (Robert Culp) are two downtrodden private investigators coasting through life until they are hired to find a missing woman. Hickey’s first lead ends with a dead body, killed by the woman who is also linked to an armed robbery, which is of interest to local mobster Mr. Brill (Robert Mandan) and his right-hand man Ballard (Michael Moriarty). As the film progresses, we learn more about the missing woman and her motivation, which propels the narrative and also adds a tragic dimension to the story. Hickey and Boggs start off not caring about anything but as their case progresses it becomes personal and they have something to fight for even if it is only revenge, which can only end in a bloody confrontation.

Walter Hill’s stripped-down screenplay gives us brief glimpses into Hickey and Boggs’ private lives. Hickey is estranged from his wife and kid while Boggs is an alcoholic who enjoys the company of prostitutes. Hill has always adhered to the less is more school of thought and Culp seems to understand this, complimenting the lean script with no-nonsense direction. Culp employs Hill’s trademark economy of style so well that Hickey & Boggs could be Hill’s long lost film. Yet, Culp still employs nice, little touches, like how Boggs always puts a paper bag that reads, “Out of Order” over every parking meter he leaves their car in front of.

For people that only know Bill Cosby as his cute and cuddly curmudgeonly dad in the 1980’s sitcom The Cosby Show, they will be in for quite a surprise with his turn in Hickey & Boggs as an all-business detective. He is especially effective in the last third of the film when his character takes a decidedly darker turn for the worse. Robert Culp is his ideal foil. Obviously, they had cultivated excellent chemistry with I Spy and this continues with Hickey & Boggs. They epitomize the world-weary private investigator but with a cynical ‘70s spin. These guys aren’t particularly noble – they have a job to get done and that’s it.

One of the hallmarks of a lot of crime films done in the ‘70s is the casting of actors that actually look and act like tough guys. Just think of the criminals that populate The Friends of Eddie Coyle (1973) or The Outfit (1973). Hickey & Boggs is no different with the trio of thugs that repeatedly cross paths with our two protagonists. They really look like guys that could mess you up without a moment’s hesitation. They exude natural menace, which enhances all of the scenes they’re in. Look close and you’ll spot character actors Vincent Gardenia, Michael Moriarty and a young, very geeky looking James Woods in key roles.

Hickey & Boggs is one of the more underrated detective films of the ‘70s but it deserves to be mentioned among the best of that era along with the likes of The Long Goodbye (1973) and Night Moves (1975). Much like those films, it takes the private investigator archetype and tears it down in a way that reflects how jaded and cynical people had become during that decade. For some time the film was hard to obtain on home video and then eventually surfaced on DVD with a horrible transfer. In recent years, a beautiful copy has shown up on MGM’s HD Channel and has now finally been released via their MOD DVD program with the same exquisite transfer. Do yourself a favor and check out this under-appreciated gem of a film.


For other excellent takes on this film, check out Mr. Peel's Sardine Liqueur, also Lazy Thoughts from a Boomer, and Obscure One-Sheet.
at September 20, 2011