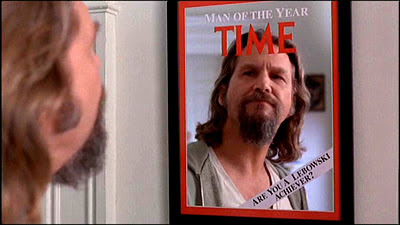 I’ve always wondered if The Big Lebowski (1998) was an attempt by the Coen brothers to address their critics, chief among them J. Hoberman and Jonathan Rosenbaum, who accuse the filmmaking duo of anti-semiticism in films like Miller’s Crossing (1990) and Barton Fink (1991). This is a rather odd charge considering that Joel and Ethan Coen are in fact Jewish. Keeping this in mind, one has to wonder what to make of Walter Sobchak (John Goodman), a character in The Big Lebowski who is proudly Jewish and even married and converted to Judaism for his wife. Then, when they were divorced, remained Jewish, defiantly so.


Clearly, the Coens were playfully thumbing their noses at Hoberman and Rosenbaum and this is further reinforced in the faux scholarly introduction to the film’s screenplay, which claims that it won the 1998 Kochba Award, “honouring achievement in the arts that defy racial and religious stereotyping and promote appreciation for the multiplicity of man.” Yeah … right. Furthermore, the unidentified writer (probably the Coens) goes on to explain the nature of humor with a hilariously in-depth analysis of what makes The Three Stooges funny and thereby making the point that if you have to explain why something is funny to someone else then they’ll never get it. So, are the Coens saying that critics like Hoberman and Rosenbaum don’t “get” their films?

Set in Los Angeles during the first Persian Gulf War, the Coens weave a decidedly unconventional tale about a man known as The Dude. Jeff "The Dude" Lebowski (Jeff Bridges) is a laid-back kinda guy, an aging Hippie who spends his days drinking White Russians, smoking pot, and bowling with his buddies — Walter, a bitter Viet Nam veteran, and Donny (Steve Buscemi), a not too-bright surfer. One night, two thugs invade the Dude’s home, rough him up, and urinate on his rug. It seems that they have him confused with another Lebowski, a rich millionaire (David Huddleston) whose young trophy wife Bunny (Tara Reid) owes money all over town. Bummed at having his prized rug ruined, The Dude decides to contact the other Lebowski and in doing so becomes immersed in a very strange, convoluted plot that involves nihilists, a kidnapping, Busby Berkeley dream sequences, British performance artists, and, of course, bowling.

I’m not going to write my usual in-depth article with production information, as that has already been done and better than I ever could. Rather, here are 24 of my favorite moments:

1. The Two Dumbest Flunkies. You’ve got one who pees on The Dude’s rug and the other who’s apparently never seen a bowling ball before. I love the one’s reaction when he realizes that The Dude’s humble abode does not resemble that of the wealthy millionaire they’re looking for. 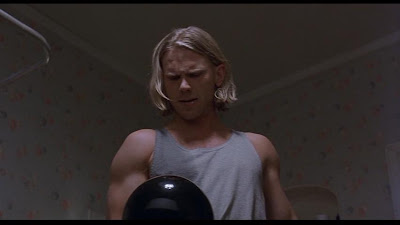 2. The introduction of Donny, Walter and The Dude is awesome in how it shows the dynamic between these friends, like how The Dude and Walter bicker like an old married couple while Donny is the conversation cheerleader, occasionally commenting on what’s being said, like “a child who wanders in the middle of a movie,” as Walter puts it.
﻿﻿ ﻿﻿ 3. I love the scene where The Dude first confronts the other Lebowski and after schooling him on how he prefers to be addressed is then chastised by the blustery rich man – “The bum’s lost!” This sets up a class struggle between haves like Lebowski and the have-nots as represented by The Dude.
﻿ ﻿ 4. “I’m just gonna find a cash machine.” Bunny Lebowski’s offer of oral sex comes at a high cost and Brandt’s (Philip Seymour Hoffman) reaction is hilarious (“That’s marvelous.”). Hoffman is so funny as the terminally uptight toady Brandt.
﻿ ﻿ 5. “If you will it, it is no dream.” This is the first declaration of Walter’s Jewish pride as he quotes Theodore Herzel but this is unfortunately quickly forgotten when he freaks out all over Smokey’s (Jimmie Dale Gilmore) breaking of the rules of bowling. After all, this isn’t ‘Nam. This is bowling. There are rules. Fortunately, Smokey narrowly avoids entering a world of pain. 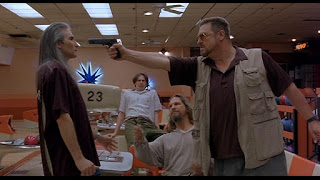 6. The Dude’s easygoing nature deflates the other Lebowski’s theatrics as he tells of Bunny being kidnapped by the nihilists. Jeff Bridges’ reaction shot at one point as he takes a drag off a joint and says, “Fuckin’ A,” is hilarious. Hoffman is also excellent in this scene as Brandt acts all upset over the news but as soon as he’s required to spring into action drops the act.
﻿
﻿
7. One of the greatest introductions of a character that has absolutely nothing to do with the plot ever. John Turturro makes the most of this scene as one of The Dude’s bowling opponents, from the licking of his ball to the little dance moves he pulls off after bowling a strike. The long pinky nail (for cocaine) and hairnet are nice touches as is the music that accompanies his intro – a cover of “Hotel California” by the Gipsy Kings. I also love The Dude’s laidback retort to Jesus’ bowling taunt: “Yeah well, that’s just, ya know, like, your opinion, man.” We even get a brief insight into Jesus’ life as a convicted pederast. Eight year-olds, dude. It is these little details that make this film so enjoyable to watch as even minor supporting characters are given a rich backstory.
﻿ ﻿ 8. After The Dude’s team advances to the next round in the bowling tournament (amazing considering that Walter pulled a gun on a fellow bowler), Walter loses his shit when Donny tells him that their next game is scheduled for Saturday, the Jewish day of rest thereby forbidding him from bowling on that day.
﻿ ﻿ 9. Logjammin’. Maude Lebowski (Julianne Moore), a feminist performance artist/painter, shows The Dude a cheapo porno film that Bunny starred in with her nihilist boyfriend Karl Hungus (Peter Stormare) in which he plays a cable T.V. technician who arrives to “fix” her cable. When she scoffs at its predictable plot and how it will end, The Dude deadpans, “He fixes the cable?” 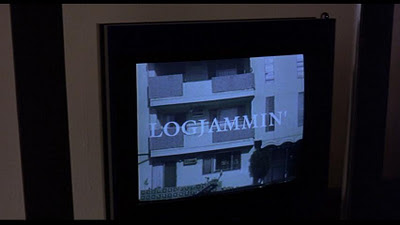 10. The Dude is suddenly manhandled by the other Lebowski’s burly limousine driver causing him to spill a glass of one of his beloved White Russians.
﻿ ﻿ 11. The nihilists bust into The Dude’s place (“Hey, this is a private residence, man.”) and interrupt his relaxing bath by throwing a ferret into his bath water, thereby blowing his high and then threatening castration. Peter Stormare and Flea’s Eurotrash German accents sound like they came straight from the Saturday Night Live skit Sprockets!
﻿ ﻿ 12. Ah, Sam Elliott as the film’s narrator known as the Stranger and who makes an appearance in full western garb to give The Dude some sage advice and comment on his usage of cuss words. With his awesome mustache and deep voice, Elliott is ideally cast as a mysterious cowboy cum Greek chorus.
﻿ ﻿ 13. And just what the hell is David Thewlis doing in this film as video artist Knox Harrington, armed with an annoying high pitched laugh and shaved head? Nothing really except yet another oddball that The Dude meets along the way. Knox and Maude seem to be sharing a private joke in their scene together, much to The Dude’s chagrin.
﻿ ﻿ 14. “Lookin’ Out My Back Door” I love the use of this fantastic Creedance Clearwater Revival song in the scene where The Dude tries to evade a mysterious car that is following him. The little yelp that Bridges lets out when his character drops a lit joint in his lap while driving is priceless. 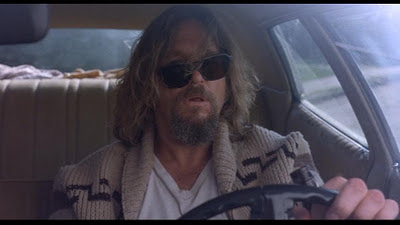 15. Goodman’s best scene in the film is when Walter and The Dude visit an insolent high school kid they believe stole his car and a million dollar ransom that was intended to free the kidnapped Bunny. The scene becomes funnier the more frustrated Walter and The Dude get as the kid refuses to buckle under their “intense” questioning culminating in Walter’s memorable insult, “This is what happens when you fuck a stranger in the ass!” over and over while trashing a sports car he thinks the kid bought with the ransom money.
﻿ ﻿ 16. Ben Gazzara as Hugh Hefner. The John Cassavetes film veteran turns up late in the game as a classy smut peddler Jackie Treehorn who drugs The Dude. I love the way Gazzara says, “feelings,” when he tells Bridges how the porn biz has changed over the years. This scene is also notable for showing The Dude doing some actual detective work. Too bad it amounts to nothing. 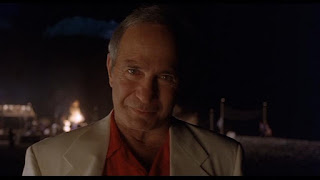 17. Gutterballs. While there are two dream sequences in the film, this is by far the best as a drugged Dude dreams of teaching Maude how to bowl while a chorus line of beautiful women engage in a Busby Berkeley style dance sequence all scored to “Just Dropped In (To See What Condition My Condition Was In)” by Kenny Rogers during his psychedelic period. Oh yeah, and Saddam Hussein gives The Dude bowling shoes and the dream ends with him being chased by the nihilists wielding huge scissors in a sequence that Freud would have a field day with. 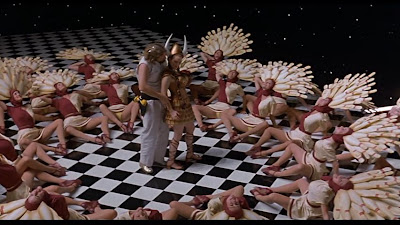 19. I love the moment between Jeffrey and Maude where they bond after having sex. It’s a nice, quiet and amusing scene as we take a break from all the crazy people The Dude encounters and learn that he was briefly a roadie for Metallica (“Bunch of assholes.”). He was also a member of the anti-war group the Seattle Seven and helped write the original Port Huron Statement – not the compromised second draft. The chemistry between Bridges and Julianne Moore is excellent and The Dude’s reaction to Maude’s true intentions for their sexual rendezvous is funny. Plus, she helps him free up his uptight thinking about the mystery he’s embroiled in.
﻿


﻿
20. Long-time Coen brothers collaborator Jon Polito pops up as a “brother shamus,” a private snoop trailing The Dude in order to find Bunny who has run away from home in Minnesota. The Dude tells him to back off from his “lady friend” (a.k.a. Maude) and alas that’s the last we see of Polito for the rest of the film.
﻿ ﻿ 21. “3,000 years of beautiful tradition, from Moses to Sandy Koufax…” We get Walter’s full-on justification for why he still practices Judaism despite being divorced. There’s something admirable about his devotion to this religion.

22. Why’d they have to kill Donny? Poor Donny didn’t hurt anybody and is taken out when he suffers a heart attack as the nihilists confront him, The Dude and Walter outside of their beloved bowling alley, which leads us to… 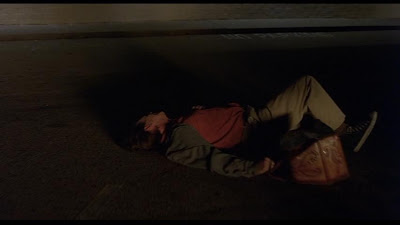 23. Donny’s Eulogy. Walter delivers a heartfelt if not misguided eulogy to Donny. Due to their modest means, Walter and The Dude transport their friend’s ashes in a Folgers coffee tin to a cliff where they plan to scatter his remains. However, the wind blows some of them back into The Dude’s goatee. Fortunately, not even Walter’s ineptitude ruins this poignant moment. 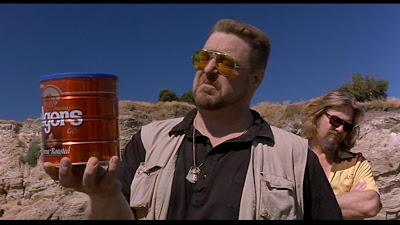 24. Despite Donny’s death, The Dude and Walter advance to the next round in the bowling tournament and our hero is visited by the Stranger once again. As The Dude departs to bowl another round, he offers the parting words of wisdom, “The Dude abides,” and the Stranger wraps things up and brings the film full circle to the soulful strains of “Dead Flowers” by Townes Van Zandt.
﻿ ﻿ The Big Lebowski is my favorite Coen brothers film. For me, it is the perfect mix of their flashy style, eccentric characters, and distinctive dialogue. It is a rare comedy that can be watched over and over and never gets old. They have created a richly detailed world that is so inviting and entertaining that you want to revisit it again and again.

So, what are some of your favorite moments/scenes/lines of dialogue from this film?