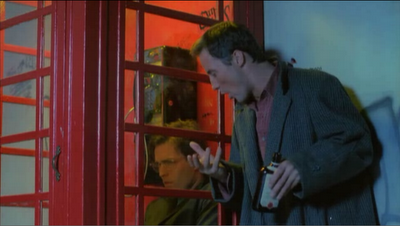 "When you're approached by a studio, they say 'We want you to make your own films' – and then they describe how the project will get financed. These are well-intentioned people; they're not stupid. But the amount of money they want to get, and the way they want to get it, prohibits me from making my kind of film. That's why most big movies today are so homogeneous."– Hal Hartley


It is this sentiment, coming from independent filmmaker Hal Hartley, which may explain the decidedly un-Hollywood kind of films that make up his eclectic body of work. He emerged on the scene in the late 1980s with films that explored the banality of suburban life mixed with the bizarre, often with hilariously ironic results. The stories and their settings that he explored were realistic enough (i.e. the boy-meets-girl tale of The Unbelievable Truth) but they were then contrasted by stylized dialogue delivered in a deadpan style reminiscent of the great stone-face Buster Keaton. His characters often talk in philosophical terms but in very mundane situations that challenge the audience. The way the dialogue is delivered by his actors appears to be awkward but this is done to illustrate the irony of the context that is spoken in.

This is evident in Simple Men (1992), which marked Hartley’s most expensive feature at that time with a meager (by Hollywood standards) $2 million budget. The film concerns two brothers on a quest to find their eccentric father and saw the filmmaker exploring the theme of desire: surviving it, suppressing it, and understanding it. As one character remarks, “there’s only trouble and desire, but the funny thing is, when you desire something you immediately get into trouble. And when you get into trouble, you don’t desire anything at all.” This is just a small sample of the weighty philosophical musings contained in this film as the characters discuss the primary themes of life: trust, truth, love, guilt, and human existence in general but never in a dry, boring way – always with an amusingly quirky spin but with poignant resonance. It’s a tricky balancing act that Hartley gets just right with Simple Men.

Bill McCabe (Robert John Burke) is a professional thief betrayed by his girlfriend (and partner-in-crime) for the other guy in their crew in what has to be one of the most laid-back break-ups among criminals put on film in recent memory. Hartley said of this sequence, “Yeah, well anyone can film a stick-up. I just wondered what happened afterwards, if the guy obviously had no intention of ever shooting anyone.” Bill is bitter and upset but he doesn’t do anything about it. Meanwhile, his younger, more contemplative brother Dennis (Bill Sage) is trying to track down their father (John MacKay), the legendary Dodgers shortstop who allegedly threw a bomb in the front door of the Pentagon 23 years ago killing seven people. As a result, he became a fugitive and was finally caught by the authorities after suffering a stroke.

Dennis finds Bill and when they go to visit their dad in the hospital a nurse tells them that he’s escaped. Their mother gives them a phone number but it’s disconnected. The area code is Long Island and so they go there looking for clues as to his whereabouts. Along the way, Bill gets involved with Kate (Karen Sillas), the beautiful owner of a diner, and cross paths with the mysterious Elina (Elina Lowensohn) who may know where their father is hiding out.

Hartley populates Simple Men with troubled people, like Ned Rifle (Jeffrey Howard) who can’t get his motorcycle to work (“There’s nothing like a machine to make a man feel insignificant.”) or Bill who suffers from a broken heart. There’s Kate, whose ex-husband was in jail but is due back any day now, and Martin (Martin Donovan), a bitter fisherman who has a thing for Kate but she won’t give him the time of day. Hartley proceeds to bounce these oddballs off each other in absurd set pieces, like one that starts off with Bill and Ned engaging in snappy banter and ends with a nun and a police officer fighting on the street while Ned dazedly repeats, “There’s nothing but trouble and desire,” which could easily be the subtitle of this film. 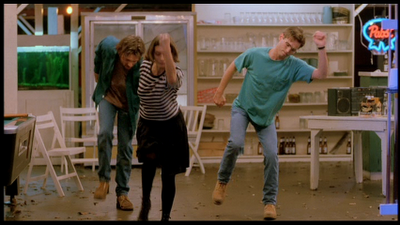 Robert John Burke and Bill Sage do a good job of playing slightly estranged brothers whose friction comes from their broken home thanks to their fugitive father. It is Hartley regular Martin Donovan that comes off the best because he knows exactly how to deliver the filmmaker’s stylized dialogue, playing an angry man due to unrequited love. He had previously been in Trust (1990) and Surviving Desire (1991) and was, in some respects, Hartley’s cinematic alter ego, but in Simple Men he plays a very different character than in those previous efforts and it demonstrates his impressive range as an actor. Yet for all of the deadpan acting, the end of the film, when Bill and Dennis finally come to terms with their estranged father, is surprisingly moving, as is the relationship that develops between Bill and Kate. This is due in large part to the palpable chemistry between Burke and Karen Sillas. Initially, Bill remains cool and aloof towards Kate but soon finds himself irresistibly drawn to her earthy charisma. The looks they exchange throughout the film convey their growing attraction towards each other.

Hartley adopts a simple style consisting mostly of static shots and long takes befitting of a dialogue-driven film such as this one. I’m sure this was done more out of budgetary limitations and lack of experience than an aesthetic choice but it is not distracting because the characters are so interesting and their dialogue is so well-written. The film’s show-stopping sequence comes when several of the characters break into an impromptu dance routine scored to “Kool Thing” by Sonic Youth. It comes out of left field and is completely at odds with the rest of the film and yet strangely works because of that reason. It’s the moment where the film temporarily breaks free of its rigid aesthetic and has a little fun. Hartley had tried a musical sequence previously for a short film he made for PBS but the one in Simple Men is more ambitious because it is being inserted into a feature-length film. It worked and is probably the one scene that most people remember from the film.

Hartley wrote the screenplay for Simple Men shortly after he left college and before he made Trust. The $2 million dollar budget was the biggest one he had worked with up to that point – a considerable leap from the $70,000 budget of his feature-length debut The Unbelievable Truth (1989). It successfully screened at the 1992 Cannes Film Festival but I think it’s fair to say that Simple Men was not well-received among mainstream critics. Roger Ebert led the charge, giving the film two out of four stars and felt that, “The problem with postmodern movies like Simple Men is that they seem to consider us fools for watching them and, on the basis of the evidence on the screen, it's hard to disagree.” In his review for The New York Times, Vincent Canby wrote, “The people in Simple Men are functions of a long shaggy-dog story, composed of purposely flat dialogue that, from time to time, leads to a purposely flat punch line.” USA Today also gave the film two out of four stars and Mike Clark wrote, “Writer-director Hal Hartley may be the most self-consciously monotonic U.S. filmmaker since the late Jack Webb, his verbal rhythms as numbingly droll as Webb's were numbingly staccato.” The Washington Post’s Rita Kempley wrote, “Simple Men has plenty of plot, but no design. There's a forced serendipity to the tale, amplified by the zombielike performances of the actors.” Entertainment Weekly gave it a B- and Lawrence O’Toole wrote, “But self-consciousness is the style of Simple Men, and soon the unwavering tone of playful existentialism wears very thin. For all his talent, Hartley talks a better movie than he makes, proving once again that the gift of gab is no guarantee of a good film experience.” In one of the rare positive notices, the Globe and Mail’s Christopher Harris wrote, “Like Hartley's other films, Simple Men is an engaging, amusing and faintly baffling tale. Hartley is a master of indirect storytelling, of revealing things on the edges more than at the centre.” 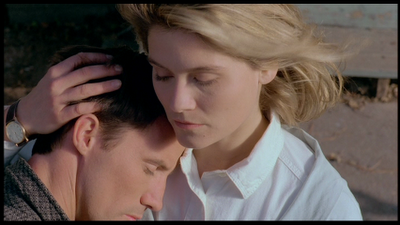 At times, the dialogue in Simple Men veers dangerously close to film school posturing but what saves it from being nothing more than pretentious twaddle is the way the actors deliver it – often as natural as possible or in an ironic way that is funny, like the burnt out existential local cop, or the gas station attendant who plays guitar and is learning French to, y’know, impress girls. If his characters often speak in aphorisms it is because Hartley wants them to “say what they mean. Exactly what they mean, which rarely happens in life.” Simple Men is a quintessential Hartley film and one that is arguably the best example of his particular aesthetic and worldview more than any other film. It may also be his most accessible populated by several actors who have gone on to distinguished careers, most notably Martin Donovan (The Opposite of Sex) and Robert John Burke (Rescue Me). Hartley continues to make films, adopting digital camera technology in 1999, and hasn’t looked back since. He remains fiercely independent, refusing to sell out in Hollywood in favor of making his own, deeply personal films.


Also, check out Sean Gill's excellent take over at his blog.