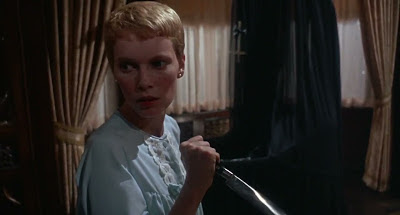 In the 1970s, films about demonic possession and Satan were all the rage thanks to films like The Exorcist (1973) and The Omen (1976). This trend was actually kick-started on a mainstream level in the late 1960s with Roman Polanski’s Hollywood debut, Rosemary’s Baby (1968). The Polish wunderkind had made a name for himself with Repulsion (1965) about a woman’s nightmarish descent into madness. Based on Ira Levin’s then-unpublished novel of the same name, Rosemary’s Baby would be another harrowing journey for a female protagonist but an external one instead of internal. The film was a big box office success and began a brilliant but brief run of films in Hollywood for Polanski.

Rosemary (Mia Farrow) and Guy (John Cassavetes) Woodhouse are a young couple who have recently moved into the Bramford apartment building in New York City. Guy is an aspiring but frustrated actor while Rosemary is the bright and supportive wife. Right from the get-go something isn’t right about the place. It could be the building’s nefarious past, as recounted by one of her friends, or it could be the nice woman she met in the laundry room who falls to her death outside the building later that night. The woman was friends with the Castevets, Roman (Sidney Blackmer) and Minnie (Ruth Gordon), a kind (maybe too nice) and spirited elderly couple that take an instant shine to Rosemary and Guy.

Minnie soon insinuates herself in Rosemary’s life, taking advantage of the young woman’s abundance of spare time. Initially, Minnie appears to be only overtly neighborly and a bit of busy body, but she’s a little too nosey, a little too pushy. The brilliance of Sidney Blackmer and Ruth Gordon’s performances is the gradual transition of their characters from kindly neighbors to something darker. Roman is a worldly traveler while Minnie is bursting with infectious energy. It is amusing how Rosemary and Guy dutifully humor them but the usually gloomy Guy quickly befriends the Castevets. Before she knows it, they are spending more time with them and he suddenly gets choice acting gigs.

The horror elements really kick in during a nightmarish sequence where a drugged Rosemary tries to make a baby with Guy. It is a disturbing scene because she is not fully in control and yet semi-aware of what is happening. The tone of the film changes after this sequence as poor Rosemary faces one frightening scenario after another. Once she gets wise to the Castevets’ true intentions, she tries all kinds of avenues of escape but they all get mysteriously closed off as it seems like her entire world has gone against her – even Guy.

There is a reason why Rosemary’s Baby was Mia Farrow’s breakout film – she delivers an incredible performance, transforming herself physically and emotionally over the course of the story. Rosemary goes from a vibrant-looking young woman to a sallow shadow of her former self. Farrow really throws herself into the role and delivers an incredible performance. With Rosemary’s Baby, Polanski created a horror film that really gets under your skin. It’s the kind of film that gradually creeps up on you so by the time Rosemary figures out what she’s up against and what is at stake; we are fully invested in her dilemma. It is a smartly-written, brilliantly acted effort that anticipated the kind of fascinating fusion of talents that would become known as New Hollywood – responsible for some of the best films in ‘70s American cinema.

Sadly, there are only a few extras on this new Criterion Collection edition but they are substantial and in every way a huge improvement over the prior Paramount version. 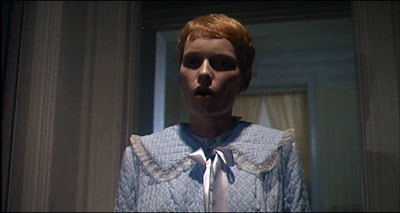 “Remembering Rosemary’s Baby” features interviews with legendary producer Robert Evans, actress Mia Farrow and director Roman Polanski who offer their respective takes on making the film. Evans took control of the project that B-movie mogul William Castle had optioned and pursued Polanski against the studio’s wishes. The director originally wanted Tuesday Weld to play Rosemary but Evans thought Farrow was perfect for it. However, she was hesitant to do it – in part because of the nudity required for the role and her then-husband Frank Sinatra who felt that she wasn’t right for the role. Fortunately, she decided to do it and the actress talks about what it was like working with Polanski in this thoroughly enjoyable retrospective documentary.

“Ira Levin and Leonard Lopate” is an excerpt from a WNYC radio program that aired in 1997. The author was promoting his sequel to Rosemary’s Baby – Son of Rosemary and talks about the original novel and his career in film, television and theater. He mentions his trepidation writing a sequel because the original was so famous and had been imitated so often.

Finally, there is a feature-length documentary entitled, Komeda, Komeda, about the life and career of Polish jazz musician and composer Krzysztof Komeda who had worked with Polanski several times, including Rosemary’s Baby. Friends, family and contemporaries paint a fascinating portrait of this artist.
at October 31, 2012