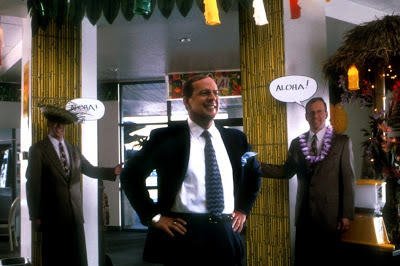 Alan Rudolph’s 1999 adaptation of Kurt Vonnegut Jr.’s 1973 novel Breakfast of Champions is the cinematic equivalent of a stand-up comedian trying so hard to be funny only to bomb spectacularly on-stage. If it’s possible for a film to exude flop sweat then this one does. And yet, it is not some impersonal Hollywood film churned out by committee. It is a passion project decades in the making and funded by its leading man, Bruce Willis, out of his own pocket. The film was a brave attempt by the movie star to show that he had some range as an actor, but he took a book that was widely regarded as unfilmable and made something that alienated Vonnegut’s fans and confused everyone else. Breakfast of Champions played the film festival circuit only to be given a brief theatrical release on a few screens before being relegated to obscurity on home video. Perhaps this misguided mess of a film deserves this kind of fate but it is a fascinating trainwreck nonetheless.

In a nod to the crude illustrations that appear sporadically throughout the novel, the opening credits also feature them while Martin Denny’s exotic lounge music plays on the soundtrack. We meet successful car salesman Dwayne Hoover (Bruce Willis) with a gun in his mouth but he doesn’t pull the trigger because he’s called to breakfast. He talks briefly with his suicidal, television-obsessed wife Celia (Barbara Hershey) and heads off to work in Midland City. Dwayne is a man barely keeping it together. He suffers from an identity crisis but has to also deal with Hawaiian Week at his car dealership. As if he didn’t have enough problems to deal with, Dwayne is having an affair with Francine (Glenne Headly), a co-worker at the dealership. Harry Le Sabre (Nick Nolte) is the sales manager at Dwayne’s dealership and likes to wear women’s clothing. He is paranoid that his boss will find out about his kinky habit.

Meanwhile, Eliot Rosewater (Ken Campbell), of the Rosewater Foundation, writes a fan letter to obscure pulp fiction author Kilgore Trout (Albert Finney), who has written 200 novels and 2000 short stories for sleazy men magazines. He has been invited to the Midlands City Arts Festival with a $1000 check to cover expenses and the promise of becoming famous. Breakfast of Champions alternates between Dwayne’s unraveling mind and Trout’s ruminations on life and his writing as he travels to the Arts Festival.

Is it any wonder Dwayne has no idea who he is when he’s constantly surrounded by images of himself, be it the omnipresent car advertisements on T.V., or his employees that surprise him one morning at work all wearing Dwayne Hoover masks (which resembles a low-tech version of the multiple Malkovichs in Being John Malkovich). Bruce Willis does a good job playing a man rapidly coming apart at the seams, but we never get an idea of why. Very little motivation is provided and so one assumes that Dwayne simply woke up one day on the brink of sanity. He starts off trying to blow his own brains out and goes downhill from there. Eventually, he comes to the realization that the only way to get out of his existential funk is talking to someone from another planet. Enter: Kilgore Trout.

Nick Nolte is hilarious and easily the best thing about this film as the unhinged Harry Le Sabre. He’s almost as far gone as Dwayne and the film plays out like a race to see who’s going to snap their cap first. Nolte and Willis also seem to be locked into a battle of wills to see who can deliver the most fearless performance devoid of any kind of vanity. It’s close, but I give Nolte the win by a hair. If I took anything away from this film it was the unforgettable image of Nolte running across a car lot yelling, “Maui!” while wearing a red lingerie. The scenes between the two actors are the best parts of the film, especially the one where an increasingly nervous Harry tries to explain to Dwayne why he is a cross-dresser.

Albert Finney is largely wasted in this film as early on Trout carries on a meaningless conversation with his pet budgie named Bill. The veteran actor spends most of his screen-time playing the cantankerous Trout who rambles on endlessly in rather cryptic fashion. The rest of the cast doesn’t fair much better with their one-note supporting characters but they all gamely do their best with the material they’re given.

Filmmaker Alan Rudolph had been trying to make a film version of Breakfast of Champions shortly after it was published in 1973 and actually wrote a screenplay in 1975, but its unconventional satire of small-town American life was largely plotless and a hard sell to movie studios. After working with actor Nick Nolte on Afterglow (1997), Rudolph convinced him to sign on and then used his name to attract financing, but still couldn’t drum up any interest.

In 1993, Bruce Willis and Rudolph had tried to make the film together, but problems with scheduling, financing or scripting prevented it from going ahead. Finally, after making Mercury Rising (1998), Willis’ brother told him, “Every action sequence in that movie was derivative of at least three films you’ve already done.” The actor decided that he needed to “do some movies without a gun in my hand,” or, as he put it, a chance to “work a little acting into my career now and then.” His production company bought the rights to Vonnegut’s book and provided the reported $10-12 million budget. As Nolte said jokingly, “Knowing Bruce, he probably presold it in Europe first.”

Willis was drawn to playing Dwayne Hoover because the character did “the scariest thing that any human being could: take the hard look inside.” Getting the film self-financed afforded Rudolph complete creative freedom – something he would not have had with a studio. It also allowed Willis to own the negative to a film he starred in. Once the star-studded cast was in place, Touchstone Pictures agreed to distribute it. Filming took place over six weeks in Twin Falls, Idaho in February 1998. 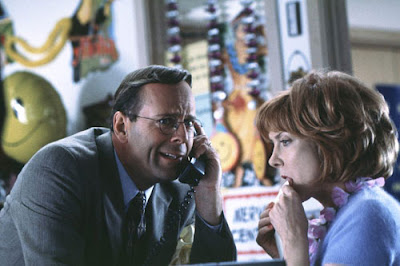 During the editing stage, Rudolph felt that Breakfast of Champions had a chance at being a box office success, especially with the cast he had assembled. After announcing a spring 1999 release, the studio changed their mind and gave it a very limited release in the fall. In retrospect, Rudolph was glad that it took so long to get the film made “because what once was a dark satire has now become an honest reflection of American culture that’s accelerating into collective madness.”

Not surprisingly, the knives came out when critics review Breakfast of Champions. In his review for The New York Times, Stephen Holden wrote, “In many ways, Breakfast of Champions is an incoherent mess. But it never compromises its zany vision of the country as a demented junkyard wonderland in which we are all strangers groping for a hand to guide us through the looking glass into an unsullied tropical paradise of eternal bliss.” Entertainment Weekly, on the other hand, gave it an “F” rating and Owen Gleiberman wrote, “Rudolph, in an act of insane folly, seems to think that what matters is the story. The result could almost be his version of a Robert Altman disaster – a movie so unhinged it practically dares you not to hate it.” The Los Angeles Times’ Kevin Thomas wrote, “As it is, Breakfast of Champions is too in-your-face, too heavily satirical in its look, and its ideas not as fresh as they should be. For the film to have grabbed us from the start, Rudolph needed to make a sharper differentiation between the everyday world his people live in and the vivid world of their tormented imaginations.” In her review for the Village Voice, Amy Taubin felt that the film, “suffers from a saccharine ending, but that's hardly its worst problem. Another middle-aged male-crisis opus, it begins on a note of total migraine-inducing hysteria, which continues unabated throughout.”

Understandably bitter with the way Breakfast of Champions was received by critics and audiences, Rudolph chalked up his film’s commercial failure to American film critics “who still have the power to destroy a little movie, and who used that power to blast the hell out of Breakfast,” and also the way Disney, who owns Touchstone Pictures, released it: “In such a derisory fashion that no one knew it existed.”

With its heightened, stylized performances from a star-studded cast and a hallucinatory look, it makes one think that Rudolph saw Terry Gilliam’s adaptation of Fear and Loathing in Las Vegas (1998) – another book with an unfilmable reputation – and decided to apply the same aesthetic to Breakfast of Champions, but it just doesn’t work because the source material is so different. Rudolph employs all kinds of zany graphics in an attempt to give us a look inside of Dwayne’s mind. As with someone of his caliber of filmmaking, Breakfast of Champions looks great, complete with atmospheric cinematography and rich set design that helps immerse us in this very stylized world.

Maybe Rudolph was inspired by his mentor Robert Altman’s absurdist ode to flight, Brewster McCloud (1970), but the end result is more like the teen comedy misfire O.C. and Stiggs (1984). The main problem with Breakfast of Champions is that it makes no sense to anyone who hasn’t read Vonnegut’s novel. It is an impenetrable collection of highlights from the book and yet I find myself admiring Rudolph and company’s chutzpah for making such a blatantly uncommercial film. Not since Gus Van Sant’s failed adaptation of another unfilmable novel, Even Cowgirls Get the Blues (1993), has a film squandered such talent. Like the aforementioned film, Breakfast of Champions is populated with an impressive cast as big names like Willis and Nolte who are supported by Barbara Hershey, Buck Henry and Owen Wilson in small roles. One feels that this film was more fun to make then it is to watch. I can’t totally hate it though, because it does feel like everyone’s heart is in the right place. You have to give Rudolph and co. an A for effort, but that’s about all you can do. This is for fans of indecipherable adaptations of iconic novels. All others need not apply. 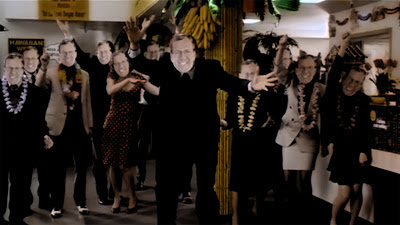