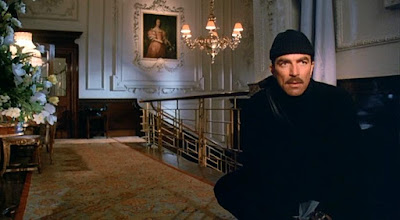 Tom Selleck has had one of the more intriguing what if film careers. If he had been able to get out of his contract for the television show Magnum, P.I. and done Raiders of the Lost Ark (1981) who knows how his career would’ve turned out? Instead, he ended up doing a string of entertaining but mostly forgettable fare such as High Road to China (1983), Lassiter (1984), and Runaway (1984) that all underperformed at the box office to one degree or another as people were by and large content to watch him every week on T.V. It wasn’t until the smash hit of Three Men and a Baby (1990) that he had a significant financial success. Of all the movies he did in the early to mid-1980s, Lassiter is the most interesting effort.
Set in 1939 London, Selleck plays a high-end jewel thief by the name of Nick Lassiter. The movie begins with the man plying his trade, expertly breaking into a luxurious mansion and stealing expensive jewelry. He almost gets away with it until the lady of the house catches him on the way out. Instead of calling out to her husband, whom she has been bickering with since they arrived home, she lets Lassiter go but not before he helps her get undressed for her bath and the surprising female nudity signals that this won’t be family-friendly PG fare but naughty R-rated fun.
When he’s not robing the rich, he’s hobnobbing with them at a swanky nightclub with his beautiful wife Sarah (Jane Seymour) where they exchange unfortunately bland repartee, which is a damn shame as Selleck and Jane Seymour have lovely chemistry together. The next day, Lassiter is picked up by Inspector Becker (Bob Hoskins) and framed for a crime he didn’t commit but is given a chance to go free if he works with FBI agent Peter Breeze (Joe Regalbuto), helping steal $10 million worth of unset diamonds from the German embassy, slowing down their espionage efforts in South America.
To do so, Lassiter must get close to the courier, Kari Von Fursten (Lauren Hutton) and her Gestapo bodyguard Max Hofer (Warren Clarke). Breeze describes her as “pretty wild” and we quickly get an idea of just how wild when we see her kill one of her sexual conquests while they’re in bed together, evidently a perverse turn-on for her. Lauren Hutton looks like she’s having fun playing a woman with “unusual appetites,” as one character puts it, and she goes on to describe Shanghai as interesting for its diversions such as “women with animals, drugs, little boys, pleasure and pain.” She certainly looks the part of an elegant Nazi with some weird kinks.
Tom Selleck does an excellent job playing a suave jewel thief who is comfortable bantering playfully with a Nazi femme fatale in posh casinos as he is watching down ‘n’ dirty underground boxing matches. He’s also not afraid to get his hands dirty as evident in a scene where he and Max have it out in a bloody brawl at Lassiter’s apartment. This role allows Selleck to show off his leading man chops, demonstrating his capacity for romance with Seymour, action, his athletic prowess with the cat burglar sequence, and even a light comic touch in an amusing scene where he communicates with a Nazi guard only through facial expressions and gestures while wearing a frilly woman’s housecoat, trying not to wake Kari sleeping in the next room.
Jane Seymour is well cast as Selleck’s foil. Sarah enjoys their lifestyle but is not crazy about his current gig and doesn’t understand why they can’t just take off to Rome or parts elsewhere. He tells her, “Someone else dealt the cards, Sarah. I’m just playing them out,” to which she replies, “Well, you’re holding a losing hand now, Nick.” She is a strong-willed person that loves her husband but won’t have her life sent in a direction she doesn’t like and Seymour does a fine job conveying her character’s strength. 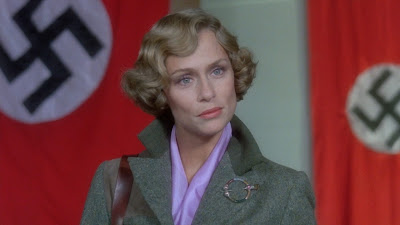 The always reliable Ed Lauter is cast refreshingly against type as Smoke, a prolific car thief and Lassiter’s best friend. Known mostly for playing cops and authority figures, he must’ve jumped at the opportunity to sink his teeth into a character on the opposite side of the law. He has an excellent scene with Selleck where Smoke and Lassiter reminisce about the good ol’ days when they bootlegged liquor during Prohibition.
Bob Hoskins plays Inspector Becker with his customary gusto. He’s a hard man that knows which pressure points to press with Lassiter but also keeps his personal life separate from his professional one when we see how he reacts to Lassiter paying a house call.
Lassiter features workman-like direction from veteran T.V. director Robert Young (Bitter Harvest) that could’ve been done with a little more pizzazz, a rather pedestrian script by David Taylor (Hanky Panky), and an unmemorable score by Ken Thorne (Superman II) that is low-key to the point of being non-existent, which prevents the movie from being something truly special. Instead, it is just pleasantly entertaining – certainly nothing wrong with that. What saves it from being forgettable is the cast who all play their roles admirably.
Comparing the diverging career paths that Harrison Ford and Tom Selleck respective careers took it isn’t hard to see why the former had a thriving career full of iconic roles in diverse films while the latter returned to T.V. with renewed success. It’s not just that Ford was the better actor but he also had a better instinct for movie roles. Part of it is being in the right place at the right time and part of it is knowing what works best for your talents and I think Selleck eventually realized that T.V. is where he belonged and the proof is in a show such a Blue Bloods, which he has starred in for 12 seasons and counting. Lassiter, in some respects, typifies his film career – entertaining and full of promise but just falling short of excellence.
at August 28, 2021