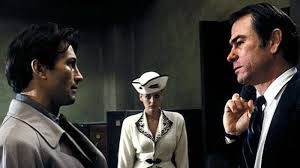 Made during her bombshell period, Virginia Madsen is perfectly cast as an elusive femme fatale in Gotham (1988), a made-for-television movie for the Showtime Channel and that was part of a run of sexy roles in the late 1980s that also included Slam Dance (1987), and into 1990s with The Hot Spot (1990) and forgettable erotic thrillers such as Caroline at Midnight (1994) and Blue Tiger (1994). Fortunately, this one stars Tommy Lee Jones and whose angle is a neo-noir fused with a ghost story.
“You ever find yourself walking down a dark street, you think you hear footsteps coming up slowly, somebody just out of sight?” This question kickstarts the story as Charles Rand (Colin Bruce) asks down-on-his-luck private investigator Eddie Mallard (Jones) to find his wife Rachel (Madsen) and tell her to leave him alone. The only problem: she’s been dead for over ten years. Rand offers Mallard a lot of money to take the case, which he accepts even though, as he confesses to his friend Tim (Kevin Jarre) later on, he fears that he’s feeding into this man’s delusions.
Eddie humors his client and his odd ramblings about his wife (“She lusts for daylight. She wants power in the daylight.”). The man is truly haunted by her death and apparent resurrection and this intrigues Eddie – that and the hefty paycheck. One day, Charles spots Rachel across the street and asks Eddie to go over and talk to her. With her long white gloves, vintage hat tilted at just the right angle and retro black dress, Rachel looks like she stepped right out of a 1940s film noir. Of course, she denies knowing Charles and humors Eddie by going out for a drink with him where she explains that she is a woman of expensive tastes. 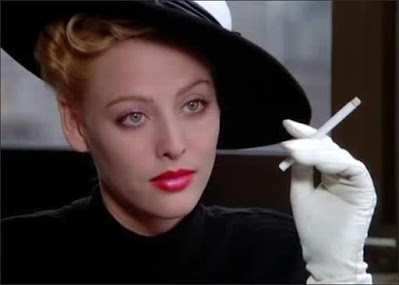 Rachel shows up at Eddie’s office and apologizes for coming on so strong the other day and takes him out for a bite to eat as a way of apologizing. She comes across as a slightly sad, lonely wealthy lady. He’s intrigued by her stunning looks and enigmatic past. Their paths cross again as she wanders out of the smoke on a deserted city street one night. The deeper he goes into the case the more he realizes it’s not as simple as it seems and like most noirs he finds himself drawn into an increasingly complex web with Rachel at its center. Is she really the deceased wife or is this merely the delusions of a crazy man?
The movie has odd beats that occasionally disrupt its traditional narrative, such as a scene where Eddie and Rachel are serenaded in an alleyway by a dirty bum with an immaculate acoustic guitar and a beautiful voice. It’s a poignant moment as the camera stays on Madsen’s face as Rachel reacts to “Danny Boy,” her eyes gradually welling up and a tear runs down her face. With the help of his very talented crew that includes the likes of David Cronenberg’s longtime production designer Carol Spier, legendary cinematographer Michael Chapman (Raging Bull) and composer George S. Clinton (Austin Powers), writer/director Lloyd Fonvielle creates a suitable neo-noir mood and atmosphere with a touch of the supernatural, such as a spooky shot of Rachel submerged in murky water, a gloved hand reaching out to Eddie.
With her old school looks, Virginia Madsen could have been a Classic Hollywood movie star and is perfectly cast as an elusive femme fatale cum woman out of time. She does an excellent job of coming across as this sweet, alluring presence and then transforms into a vulgar, vengeful creature. The actor is more than believable as a woman that could seduce men into doing her bidding and destroying their lives in the process. 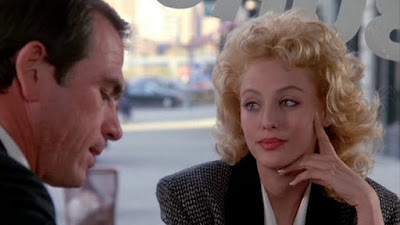 Tommy Lee Jones is well cast as a world-weary gumshoe who thinks he knows all the angles until he takes on this case and becomes entangled in Rachel’s web. Like Rachel, Eddie undergoes his own transformation and Jones does an excellent job of conveying a man who has seen it all to one obsessed with a woman that tears his life apart.
The critics of the time weren’t too kind to Gotham. The Washington Post's Tom Shales wrote, "Madsen is a sensuously spooky Rachel. She is also quite naked in two or three scenes, popping up, literally, in the bathtub, and falling out of a refrigerator. Madsen holds Jones and the camera captive. Maybe it doesn't matter that the whole thing is senseless." In her review for the Los Angeles Times, Lynne Heffley wrote, "What viewers fall victim to is a flawed vision. Suspense fizzles into steamy homage to Madsen’s beauty, clad and unclad; New York City locales are unbelievably underpopulated; a street bum sings “Danny Boy"-all of it-and Madsen’s exquisite lips are either framing romance novel banalities or a favorite obscenity." The New York Times’ Walter Goodman described it as “a lugubrious telling of a story that at its best is incomprehensible.”
“It may be a dream but it’s one of those dreams you can’t wake up from,” Eddie says at one point and it is the narrow line Gotham treads between what is real and what we perceive as real. And isn’t that all down to perception anyway? One person’s reality could be another’s dream. Since this movie is a neo-noir typically things don’t go well for the protagonist but Fonvielle twists this convention so that his main character is spared while another character is doomed. He does an excellent job of grounding the movie in its own reality so we’re never sure what is real and what is a dream except for little details that he uses as signposts along the way. It’s a tricky balancing acting between the ridiculous and the sublime but then again, isn’t all a matter of perception? 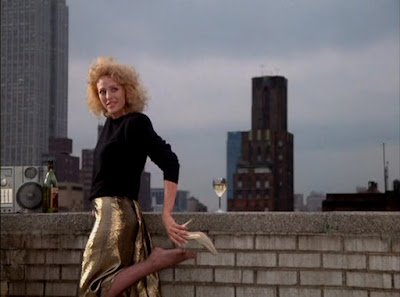