The Hunt for Red October

Has it really been 20 years since The Hunt For Red October (1990) was released in theaters? It has aged surprisingly well. Fresh off his back-to-back successes of Predator (1987) and Die Hard (1988), director John McTiernan was at the top of his game. He had become the go-to guy for big budget, blockbuster action films. So, it made sense that he would be entrusted with kickstarting a potential franchise with Red October, an adaptation of Tom Clancy’s best-selling novel of the same name, in the hopes of launching a series of films featuring recurring Clancy protagonist Jack Ryan. Paramount Pictures wasn’t taking any chances, casting screen legend Sean Connery and pairing him up with up-and-coming movie star Alec Baldwin. The result, not surprisingly, was box office gold and arguably the strongest entry in the Jack Ryan franchise.

It's the mid-1980s and the Cold War is at its peak. American Naval Intelligence discovers that the Russians have created the perfect nuclear submarine — one that can run completely silent. CIA analyst Jack Ryan (Alec Baldwin) is called in to confirm that this is true, but at the meeting with the Joint Chiefs of Staff, he puts forth a radical theory: the sub-commander of this new submarine, Captain Marko Ramius (Sean Connery), may actually be trying to defect and not trying to start World War III as they all fear. This is further complicated when the Russians report that they've lost all contact with Ramius. The powers that be send Ryan into the field in the hopes that he can contact the Russian sub-commander before his countrymen blow him out of the water. The film becomes a race against time as Ryan boards the USS Dallas, the American sub closest to the Red October, and convinces its commander (Scott Glenn) that Ramius plans to defect.

McTiernan does a nice job of showing the camaraderie aboard the USS Dallas in a brief scene where the captain of the sub tells a story about how fellow crew member Seaman Jones (Courtney B. Vance) had Pavarotti blasting over the sound system during an exercise with other subs in their fleet. It’s a nice moment of levity amidst this generally serious film. McTiernan also doesn't bog the film down with an overabundance of technical jargon. And what techno-speak there is in the film is spoken expertly by the cast in a way that is understandable. You may not understand it but you know what they mean. 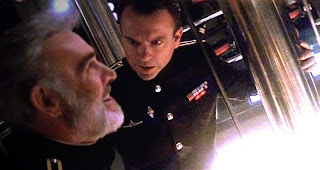 Along with Das Boot (1981), Red October remains one of the few decent submarine films. And this is because McTiernan builds the tension with the right amount of white-knuckled intensity. The film attempts to maintain the suspense of whether Ramius has gone rogue or is defecting for as long as it can but since Sean Connery is playing the character this removes all doubt as to his true intentions. Connery playing a villain at this stage in his career? Ridiculous! The first hour of Red October is all set-up as the film establishes the major players and their intentions. Then, it shifts into an elaborate game of cat and mouse as both the Russians and the Americans pursue Ramius. If that wasn’t enough, McTiernan ratchets up the tension with the discovery of a saboteur aboard the Red October.

After reading the galley proofs of Tom Clancy’s novel The Hunt for Red October in February 1985, producer Mace Neufeld optioned it. The book went on to become a best-seller and still no Hollywood studio was interested because of its complicated technical jargon. Neufeld said, “I read some of the reports from the other studios, and the story was too complicated to understand.” After 18 months, he finally got a high-level executive at Paramount Pictures to read Clancy’s novel and agree to develop it into a film.

Screenwriters Larry Ferguson and Donald Stewart worked on the screenplay while Neufeld approached the United States Navy in order to get their approval. Initially, they were uncertain because of the fear that top secret information or technology might be exposed. Fortunately, several admirals were fans of Clancy’s book and argued that the film could do for submariners what Top Gun (1986) did for the Navy’s jet fighter pilots. To that end, the director of the Navy’s western regional information office in Los Angeles offered possible changes to the script that would make the Navy look good.

Alec Baldwin was approached to appear in the Red October in December 1988 but was not told for what role. Austrian actor Klaus Maria Brandauer was cast as Marko Ramius but unfortunately two weeks into film he had to quit due to a prior commitment. The producers quickly faxed a copy of the script to Sean Connery. Initially, he declined the offer because the script didn’t make any sense. It turned out that he was missing the first page which stated that the film was set in the past during the Cold War. He agreed to do it and arrived in Los Angeles on a Friday and was supposed to start filming on Monday but he asked for a day to rehearse in order to get into the role.

The Navy gave the production unparalleled access to their submarines, allowing them to take pictures of unclassified sections of the USS Chicago and USS Portsmouth for set and prop design. Key cast and crew members took rides in subs including Alec Baldwin and Scott Glenn, both of whom took an overnight trip on the USS Salt Lake City. To research for his role, Glenn temporarily assumed the identity of a submarine captain on board the USS Houston. The crew took “orders” from Glenn, who was being prompted by the sub’s commanding officer. 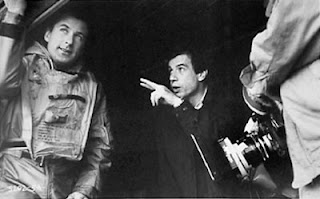 Shooting in actual submarines was deemed impractical and in their place five soundstages on the Paramount backlot were used with two 50-foot square platforms housing mock-ups of the Red October and the USS Dallas were built. They stood on top of hydraulic gimbals that simulated the sub’s movements. Connery remembered, "It was very claustrophobic. There were 62 people in a very confined space, 45 feet above the stage floor. It got very hot on the sets, and I'm also prone to sea sickness. The set would tilt to 45 degrees. Very disturbing.”

With The Hunt for Red October, Alec Baldwin was being groomed for A-list leading man status. Prior to this film he had appeared in an impressively diverse collection of films, playing a bland, dead Yuppie in Beetlejuice (1988), an unfaithful greaseball boyfriend in Working Girl (1988), and an unscrupulous radio station manager in Talk Radio (1988). Throughout Red October, Ryan is constantly proving his credentials to veteran military officers that he encounters, including a memorable briefing with a group of generals where he puts one of them in their place after the man condescendingly scoffs at his theory about Ramius.

After all this time has passed and two other actors have assayed the role, Alec Baldwin is still the best Jack Ryan for my money. He brings a solid mix of serious action hero with a whimsical sense of humor to his version of Ryan that is sorely missing from the stuffy, no-nonsense approach of Harrison Ford and the wooden acting of Ben Affleck. Baldwin instills a certain warmth and humanity in Ryan that is a refreshing contrast to the technology that dominates the film. Baldwin does a good job of conveying Ryan’s intelligence – after all, he’s a thinking man’s action hero – but he has his doubts and this humanizes the character.

With his baggage of iconic movie roles, Sean Connery is well-cast as the confident Ramius. There is a scene where he tells his inner circle of defectors his true intentions. Calmly eating his dinner, Ramius tells them, “Anatoli, you’re afraid of our fleet, hmm? Well, you should be. Personally, I give us one chance in three.” Connery says this in casual fashion as only he can. I suppose I believe him as a Russian sub commander as much as I believe him as an Irish cop in The Untouchables (1987). Which is to say not so much but it’s Sean freakin’ Connery, dammit! He’s the most virile Scottish actor alive today. He was James Bond and Indiana Jones’ father fer chrissakes! He pulls off the role through sheer charisma. Who else could play the enigmatic veteran commander of the entire Russian Navy? Connery has the gravitas and the iconic cinematic presence to make him seem like the ideal choice to play Ramius.

The Hunt for Red October features a stellar cast of fantastic character actors supporting Connery and Baldwin. Two of Ramius’ senior crew members are played by Sam Neill and Tim Curry. Neill is excellent as Connery’s no-nonsense second-in-command who defends him against the other defectors who doubt Ramius’ motivations but in private he voices his own concerns. You’ve got Scott Glenn as the commander of the USS Dallas, James Earl Jones as Ryan’s superior and friend, and Stellan Skarsgard as the Russian sub commander hunting down Ramius. Richard Jordan even pops up in a small but memorable part as the President’s National Security Adviser and talks like how I imagine most politicians do when they are among their own. At one point, he tells Ryan, “Listen, I’m a politician which means I’m a cheat and a liar, and when I’m not kissing babies, I’m stealing their lollipops, but it also means that I keep my options open.” It takes a special kind of actor to come in and knock it out of the park with very little screen time but Jordan does it so well and makes it look easy.

When it was released in 1990, The Hunt for the Red October was not well-received by critics from several major publications but still managed to be one of the top grossing films of the year. Leading the charge was the Washington Post’s Hal Hinson who criticized the film in his review, commenting, "Nothing much happens, at least not onscreen ... There isn't much to look at. When the action sequences finally come, the underwater images are murky and impossible to follow." In his review for The New York Times, Vincent Canby wrote, "Mr. McTiernan is not a subtle director. Punches are pulled constantly. The audience is told by word and soundtrack music when it should fear the worst, though the action on the screen gives the lie to such warnings." Newsweek magazine’s David Ansen wrote, "But it's at the gut level that Red October disappoints. This smoother, impressively mounted machine is curiously ungripping. Like an overfilled kettle, it takes far too long to come to a boil." However, Roger Ebert called it "a skillful, efficient film that involves us in the clever and deceptive game being played.” 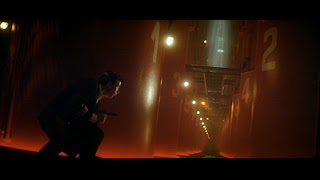 Techno-thrillers don't get any better than this film — you've got Baldwin as the reluctant hero who steps up when he has to, casting Connery with his iconic presence as the enigmatic Ramius, and a top notch supporting cast of character actors. Add to this, expert direction from McTiernan and you've got the best Jack Ryan film to date. Sadly, this would be his last really good film. With the exception of The Thomas Crown Affair (1999), he has struggled with the tiresome Medicine Man (1992), signed on for the redundant Die Hard with a Vengeance (1995) and finally taken up residence in Hacksville with the brainless Rollerball remake (2002). Watching The Hunt for Red October again is a sobering reminder of what a good director he used to be.