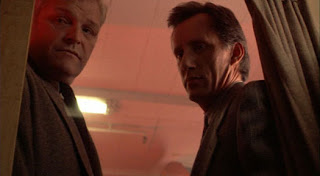 Best Seller (1987) is an example of an odd convergence of talent with a screenplay penned by B-movie schlockmeister Larry (It’s Alive) Cohen, directed by journeyman crime film director John (Rolling Thunder) Flynn, and starring A-list talent like James Woods and Brian Dennehy. The key to enjoying this film is if you can swallow Cohen’s pulpy B-movie nonsense: a slick, corporate hitman convinces a hard-boiled police detective, and sometimes author, to write his memoirs. Once you get past this rather odd premise, Best Seller is quite enjoyable to watch, especially the interplay between the two lead actors who do their best to sell the film’s set-up.

James Woods had quite a run in the ‘80s with intense performances in films like Salvador (1986), Cop (1987) and True Believer (1989). He’s in fine form here as an ultra-confident killer. His best moments are when he tries to convince Brian Dennehy’s cop of some of the people he murdered for Kappa International. Woods brings his customary intensity to these scenes and a certain reptilian charm as a corporate assassin. Cleve really isn’t a nice guy – in fact’s he’s an arrogant prick – but Woods manages to get us to like him anyways because the actor is so charismatic in his own right.

Cleve’s crusade against his former corporate handlers is Larry Cohen’s blatant attack on corporate greed so prevalent in the “Greed is good” decade. Cohen wrote the screenplay, reportedly based loosely on Los Angeles cop Joseph Wambaugh, who tried to remain on the police force after several of his novels became best-sellers, in 1981 for Columbia Pictures but it was stuck in development hell due to a change in management. Orion Pictures eventually picked it up. Flynn rewrote Cohen’s script but was unable to get credit because he failed to prove to the Writers Guild of America that he had written 51% of it. The film was originally called Hard Cover but was changed to Best Seller in post-production as the former title didn’t test well with preview audiences. At the time of the film’s release, Cohen said, “I think the idea of being a killer for a major corporation was a little bizarre seven years ago. But time has caught up with the story when we’re reading all these stories about corruption in big business and corruption in Wall Street and the craziness in Washington.” Cleve’s ruthless tactics for Kappa International are meant to show just how far corporations are willing to go to exert their influence and power. It is this commentary that elevates Best Seller above your typical crime thriller – that, and the performances of Woods and Dennehy. 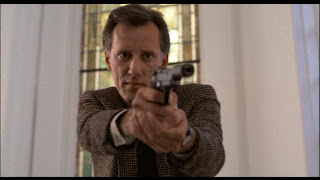 Best Seller was backed by Orion, an independent studio that pushed through all sorts of fascinating cinematic gems in the ‘80s, from efforts by auteurs like Woody Allen, to genre fare like RoboCop (1987). None of the major studios would’ve touched pulpy material like this and it’s a shame because a film like this has become scarce in the 2000s. The film does a good job delivering the requisite genre conventions under John Flynn’s workman-like direction and the television cop show production values only add to the tawdry B-movie vibe. Best Seller is certainly no masterpiece but it is a solid piece of entertainment and one of those underappreciated gems from the ‘80s waiting to be rediscovered.


Flynn’s no-nonsense, self-assured direction quickly establishes itself in the film’s prologue set in Los Angeles circa 1972 with an ill-fated bank heist. There are some nice touches in this sequence, like the lone bum sleeping on the steps of the building that is about to be robbed, and all of the crooks wearing Richard Nixon masks (anticipating the Ex-Presidents in Point Break). A cop named Dennis Meechum (Brian Dennehy) barely survives the heist (although, a couple of his fellow officers aren’t so lucky) and goes on to write a best-selling book about the incident.

Fifteen years later, Meechum has graduated to undercover work, despite being a high-profile author in his spare time (?!), busting bad guys. During one case he’s almost killed if not for the last minute intervention by an enigmatic stranger. We are given a little insight into this cop. He’s a widower raising a teenage daughter (Allison Balson), facing lots of unpaid bills, and has missed the last four deadlines on his latest book. He’s not quite the burn-out cop that Nick Nolte was known for playing in the 1980s but he’s stuck in a rut. 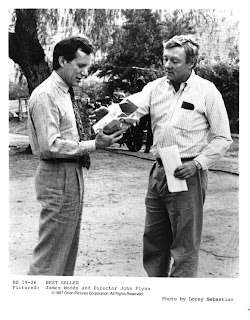 Meechum finally meets the mystery man known as Cleve (James Woods) who proceeds to pitch an idea for a new book about his life and the dirty work he did for tycoon David Madlock (David Shenar) and his company Kappa International. During one of their meetings, Cleve lays it all out for a skeptical Meechum: “Corporations deal in two things, period: assets and liabilities. I removed the liabilities and I provided some assets.” It turns out that Cleve was in on the bank heist back in ’72 and helped Madlock get his start. However, he’s had a falling out with the businessman and wants to expose his corrupt enterprise with Meechum’s help. And so, Cleve and Meechum form an uneasy partnership that is volatile at best as the hitman attempts to back-up his wild claims to the understandably wary cop.

Woods plays well off of Dennehy’s variation of the cop he portrayed in F/X (1986). He’s not as rumpled and still has his issues but there’s the same sharp intellect. Meechum plans to string Cleve along until he gives him enough evidence to bust him and get some much deserved payback for the ’72 bank job. While Woods is all wiry intensity, Dennehy is a solid, imposing figure with his stocky figure. Most of the film’s best scenes involve watching these two top notch actors bounce off each other.

This is evident in a scene where Cleve tries to pick up a woman at a bar and gets into it with her date only for the guy to be put in his place by Meechum. Just one look by Dennehy makes the man back down. I know I wouldn’t want to mess with someone like Dennehy. Cleve demonstrates his considerable willpower (and threshold for pain) and, in doing so, reveals a part of his past that sets off Meechum. The tension between the two characters in this scene is tangible and ups the ante in their relationship.

Best Seller was not well-received by critics to say the least. Chief among them was Roger Ebert who felt that the film was “light on plot, real light. It doesn’t have a compelling story at its center ... This is a case of a movie that has too much content, but not enough subject.” In his review for the Washington Post, Desson Howe found that the film’s premise was “flimsy” and only existed to support Wood’s “trademark intensity. He flits about the screen like an edgy sprite in search of a story.” The New York Times’ Vincent Canby was particularly harsh in his assessment of the film and felt that the filmmakers worked hard to create a “movie totally without suspense, humor, plausibility, charm, excitement, wit and substance.” The Globe and Mail’s Rick Groen was a little more forgiving in his review: “Thanks to a couple of gifted saviors, Best Seller is alive if not well; it breathes but doesn’t thrive.” Newsweek magazine’s David Ansen was even more generous in his review as he wrote, “watching Woods and Dennehy work out their tense, kinky love-hate relationship is a treat. An adroit, sardonic little thriller.” In his review for the Los Angeles Times, Michael Wilmington wrote, “Though the story seems insane, the actors ground it in psychological reality: Woods with sullen pouts, cold seductions and bursts of terrifyingly automatic violence; Dennehy with his watchful, steady-backed dependability.” 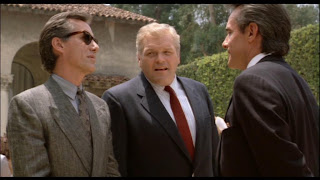 Best Seller was backed by Orion, an independent studio that pushed through all sorts of fascinating cinematic gems in the ‘80s, from efforts by auteurs like Woody Allen, to genre fare like RoboCop (1987). None of the major studios would’ve touched pulpy material like this and it’s a shame because a film like this has become scarce in the 2000s. The film does a good job delivering the requisite genre conventions under John Flynn’s workman-like direction and the television cop show production values only add to the tawdry B-movie vibe. Best Seller is certainly no masterpiece but it is a solid piece of entertainment and one of those underappreciated gems from the ‘80s waiting to be rediscovered.