DVD of the Week: Jennifer's Body 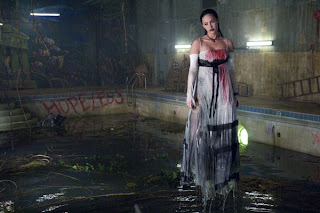 There is a scene in Juno (2007) where two characters argue about who makes gorier horror films, Herschell Gordon Lewis or Dario Argento. The film was written by Diablo Cody and she went on to win an Academy Award for her screenplay full of witty, stylized dialogue and quirky characters. This brief exchange in Juno hinted that perhaps she had aspirations to write a horror film which is exactly what she did with Jennifer’s Body (2009). In retrospect, this film was doomed to fail commercially. Both Cody and the film’s star, Megan Fox, had become overexposed in the media and a backlash was brewing. You could feel it in the air.

Cody had already experienced some backlash once Juno became a part of the cultural zeitgeist but Fox was still enjoying the success she garnered from the immensely popular Transformers films. However, with Jennifer’s Body she couldn’t hide behind expensive CGI and noisy action sequences and had to step up and demonstrate some acting chops. Unfortunately, she had become the Maxim magazine pinup girl du jour as well as gracing numerous other covers and people were clearly tired of seeing her everywhere. Add to this fact that the horror genre is a niche market with limited appeal and so if the studio was expecting Juno-like box office results they were in for a rude awakening.

Jennifer Check (Megan Fox) and Anita “Needy” Lesnicki (Amanda Seyfried) are best friends with the former being the hot cheerleader type and the latter a nerd. Normally, these two diametrically opposed types don’t bond in high school but that’s because they’ve been friends since they were little kids. One night, they decide to check out one of Jennifer’s favorite bands, Low Shoulder, at a local bar because she’s fixated on their lead singer (a deadpan Adam Brody). The band is a spot-on jab at all of those crappy emo groups like Dashboard Confessional, right down to the sensitive ponytail guy lyrics and wardrobe reminiscent of Maroon 5 or The Killers.

After narrowly escaping a fire that engulfs the bar midway through Low Shoulder’s set (an eerie harbinger of things to come), the girls split up. Jennifer takes off with the band and an understandably upset Needy goes home and calls her boyfriend Chip (Johnny Simmons). Later that night, Jennifer shows up unexpectedly at Needy’s house covered in blood and acting very peculiar. Maybe it’s the animalistic growl she lets out before puking up a huge amount of black, oily fluid all over Needy’s kitchen floor.

The next day at school, Jennifer shows up and acts like nothing happened, shrugging off the apocalyptic fire that almost took their lives. If Jennifer was a man-eater in a metaphoric sense, she becomes one literally as she uses the promise of sex to lure boys and then proceeds to rip them to shreds, devouring them. These scenes naturally give Megan Fox the chance to show off her considerable assets. Jennifer clearly enjoys her newfound power but it comes at a horrific cost. Needy begins to realize what’s really going on with her friend and decides to stop her.

At times, Jennifer’s Body is like Heathers (1989) re-imagined as a horror film with Fox in the nihilistic Christian Slater role and a dash of Idle Hands (1999) thrown in for good measure. Both films feature a series of teen deaths and show how the media exploits them while a shell-shocked student body tries to cope. Both films also feature pitch black humor with Jennifer’s Body gleefully skewering popular culture. 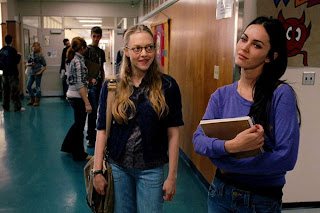 Cody’s screenplay is smart and witty but the overabundance of pop culture references does instantly date it, which I’m sure will be part of its appeal to the cult following that will no doubt form once all the hype goes away. As she demonstrated with Juno, Cody has an uncanny knack for authentically capturing not just how teenagers speak but act as well. This is especially true of teenage girls and she does a good job depicting the relationship between Jennifer and Needy. Before her transformation, Jennifer wielded all the power while Needy worshipped her, but when Needy realizes what her best friend has become, she takes on a more assertive role, acquiring her own power.

Jennifer’s Body is strictly cult film material with all kinds of pop culture references – both obvious and obscure – to those savvy enough to spot them. In a refreshing tweak of the horror genre, it’s not the girls who are the victims of the monster but boys instead. It’s not surprising that the film was not a mainstream hit and those obituaries on Cody and Fox’s careers that their critics seemed to take so much delight in writing may be premature.

On the theatrical version of the film there is an audio commentary by director Karyn Kusama and writer Diablo Cody. Things start off slowly as the two women get caught up in watching the film. Kusama praises the “totally unique” structure of the script and briefly touches upon what drew her to the project. Naturally, she and Cody talk about the relationship between Jennifer and Needy – the dynamic that plays over the course of the film. They point out that they didn’t want to make the boys in the film deserved of punishment – just clueless. 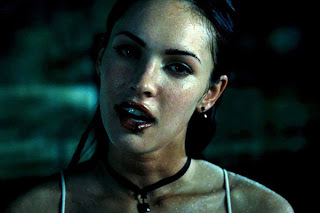 On the extended version, Kusama returns to do a commentary on her on. Thankfully, it jumps to specific moments in this version that differ from the theatrical one. Kusama says that this version more accurately reflects Cody’s original script. She explains why this footage has been put back in and, in some cases, why it was not in the theatrical version.

I also recommend checking out a really great take on the film over at the Final Girl blog and also a fantastic analysis over at John Kenneth Muir's Reflections on Film/TV.
at January 29, 2010

BLOGGER'S NOTE: This post is part of The Sword and Sandal Blogathon over at the Moon in Gemini blog. Created by Robert E. Howard...