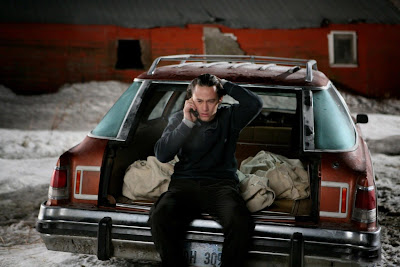 BLOGGER'S NOTE: This post is part of the Joseph Gordon Levitt Blog-a-thon over at the Detailed Criticisms blog. This is also a reprint of a DVD review I did for this film a few years ago.

With his adaptation of Elmore Leonard’s novel, Out of Sight, Scott Frank demonstrated a knack for crime thrillers with plenty of plot twists and double crosses. Now, he’s finally gotten the chance to direct his own movie and the result is The Lookout (2007), a neo-noir that evokes other crime movies like Charley Varrick (1973) and Fargo (1996).


Chris Pratt (Joseph Gordon-Levitt) is a young hockey player with a promising career that is snuffed out in an instant thanks to a car accident that he caused. Four years later, he’s working as a night janitor at a local Midwestern bank located out in the middle of nowhere and dealing with a head injury from the accident. He has to write down everything that he does to get ready every day. His old life is gone and his new one is one mundane day after another. Chris now lives with Lewis (Jeff Daniels), his blind roommate who helps the young man out with things around their apartment.

Chris meets Gary (Matthew Goode) at a bar one night. He’s a genial guy who befriends the young man over beers. Chris also meets a beautiful young woman named Luvlee (Isla Fisher) who is friends with Gary. They quickly go to work on Chris, Gary appealing to his brain and Luvlee to his heart. They make him feel like he belongs which is important to him because his family doesn’t know how to relate to him anymore. Pretty soon Gary tells Chris about a bank heist he plans to pull with his buddies. The bank that they are targeting just happens to be the one that Chris works at. Gary dangles the proverbial carrot in front of Chris with the promise of money and the power that comes with it. He is very persuasive and knows exactly which buttons to push. Like most heist films, things do not go according to plan and the rest of the film deals with the aftershocks.

Joseph Gordon-Levitt continues his knack for offbeat roles. He does a great job portraying someone with neurological damage and the frustration that comes from not being able to do simple things like opening a can of food or remembering someone’s name. He also conveys the guilt his character feels over the car accident that cost two of his friends their lives and robbed him of a promising future. We see how he tries to hide his disorder and the frustration of not being able to do basic things. It’s a performance grounded in realism that is in contrast to this stylized noir world. It doesn’t hurt that he is surrounded by cold, detached characters, and this makes him very sympathetic as well.

Jeff Daniels steals pretty much every scene he’s in as Chris’ genial roommate. The actor displays a dry sense of humor that is very funny to see in action. He and Gordon-Levitt’s character make for very unlikely roommates to say the least but the two actors make it work thanks to the excellent chemistry they have together. Along with The Squid in the Whale (2005) and Good Night, and Good Luck (2005), Daniels is turning out to be quite an excellent character actor appearing in several well-made independent films.

Scott Frank has a keen visual sense, adopting a predominantly dark color scheme in keeping with the neo-noir tradition. With The Lookout, he has crafted a clever little thriller with a fascinating protagonist at its center. What could have easily been a forgettable film is anchored by yet another riveting performance by Gordon-Levitt. 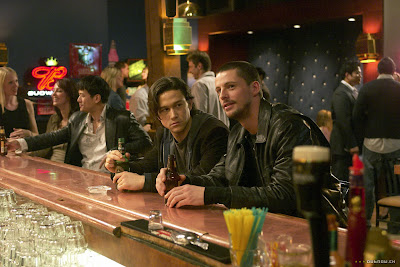 “Behind the Mind of Christ Pratt” features an interview with the film’s star, Joseph Gordon-Levitt. He was drawn to the complexity of the character and ended up living with the role for almost a year. He talks about how he portrayed Chris and speaks intelligently about his take on the material.

“Sequencing The Lookout” takes a look at various aspects of the movie: the script, casting, the look, and so on in an interesting way. Frank says that he was influenced by European thrillers that emphasized character. He talks about the origins of the story as well.

Finally, there is an audio commentary by writer/director Scott Frank and his director of photography Alar Kivilo. They talk about the challenge of shooting in the wilds of Canada. It was spring when they started but the temperature was very cold. Frank isn’t afraid to point out the mistakes he made as a first-time director. With Kivilo, their comments tend to be about filmmaking techniques like the cameras they used, the type of shots for a given scene and locations used. This could come across as kind of dull if you’re not into the technical aspects of film.