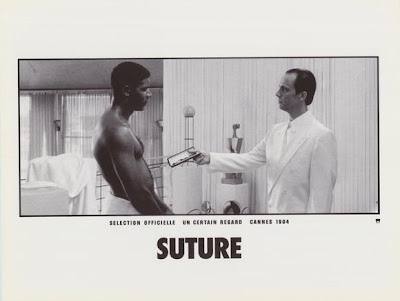 Scott McGehee and David Siegel are part of a generation of American independent filmmakers that capitalized on the surprise success of Steven Soderbergh’s Sex, Lies & Videotape (1989) at the Sundance Film Festival. That film helped kickstart a very prolific period of indie cinema during the 1990s where the rise in prominence of Sundance and boutique movie studios like Miramax pushed through unusual material, like McGehee and Siegel’s Suture (1993), that wouldn’t normally have been made or distributed. These two filmmakers even managed to get Soderbergh to executive produce their film and he championed it in interviews. Sadly, the studio distributing Suture had no idea how to market this cerebral neo-noir and it quickly faded into obscurity where it still resides to this day. Even back then it was a hard sell with an unconventional premise and no movie stars but should now be regarded as a bold genre experiment.


Vincent (Michael Harris) and Clay (Dennis Haysbert) are brothers. The only thing is that Clay is African American and Vincent is white – something that is never once acknowledged or commented on by anyone. Amazingly, at one point, Clay even remarks at how much they look alike even though they don’t actually resemble each other in any way. They reconnect after the death of their father that, unbeknownst to Clay, Vincent murdered. He ends up stealing Clay’s identity and blows him up in a car, leaving him for dead. However, Clay manages to survive the explosion but has to undergo extensive surgery and wakes up with amnesia. He is told that he’s Vincent. Dr. Renee Descartes (Mel Harris) helps reconstruct Clay physically while Dr. Max Shinoda (Sab Shimono) tries to fix him psychologically. Clay has to somehow rediscover his own identity and clear his name.

Dennis Haysbert, who would go on to appear in such diverse films as Michael Mann’s Heat (1995) and Todd Haynes’ Far From Heaven (2002), is quite good as Clay, a man framed for a crime he did not commit by his own brother. He comes across as quite sympathetic as Clay tries to rebuild his life and figure out who he is. His dreams may be the key to unlocking his true identity. By casting Haysbert as Vincent’s brother, McGehee and Siegel weren’t interested in commenting on race relations in the United States but wanted to keep the film in the “parameters of sociology than of race, the way the homogeneity of society affects the construction of a personal identity.” The narrative says that Clay and Vincent look alike and they don’t know that they’re different. We are acutely aware of it and reminded visually by the filmmakers 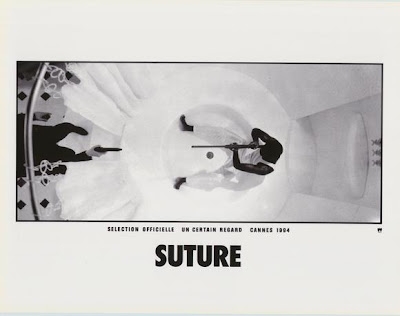 McGehee and Siegel had been working together since 1989. Prior to Suture, their only filmmaking experience was two short films: Birds Past (1989) and Speak Then Persephone (1990). They set up a limited partnership and raised the one million dollar budget by borrowing from family and friends. According to McGehee, with Suture they wanted to “construct a story that was generally about identity.” They decided to shoot the film in Phoenix, Arizona because he felt that it was “almost like an abandoned city, it’s so large and overbuilt and the streets are so dead it feels empty.” They liked the city’s “high modernist, very sparse aesthetic” and used its stunning, timeless architecture to “create a sort of unreal space,” McGehee said.

McGehee and Siegel employ stunning black and white Cinemascope photography that evokes classic film noir. They were actually influenced by mid-1960s Japanese films like Hiroshi Teshigahara’s The Face of Another (1965) which utilized widescreen black and white cinematography. They wanted to give Suture an early ‘60s sensibility and loved the black and white Cinemascope films from that period, like The Manchurian Candidate (1962) and Seconds (1966). According to Siegel, “it’s an absolutely gripping look that’s used so rarely today, and it’s a look from a time period that we wanted to evoke.” The way each scene is shot and the composition of the frame is quite impressive coming from first-time feature filmmakers with no formal filmmaking training. This is an elegantly-shot film and not at all like a lot of indie films that have a low budget look and feel.

After seeing an early rough cut of Suture, Steven Soderbergh became fascinated with the film and helped McGehee and Siegel find completion finances during post-production. Suture had its premiere at the 1993 Telluride Film Festival and went on to be screened at the Toronto and Sundance Film Festivals. The film was not well-received by critics at the time. Roger Ebert gave the film two-and-a-half stars and felt that McGehee and Siegel were, “apparently more concerned with how the movie looks than how it plays.” In her review for The New York Times, Caryn James wrote, “The best way to approach Suture is to consider it a witty, stylish goof on psychiatry, identity and murder mysteries.” Entertainment Weekly gave the film a “C+” rating and Lisa Schwarzbaum described the story as “clever but ultimately overworked.” In his review for the Washington Post, Desson Howe found it to be “constantly engaging – and weird,” while also an “atmospheric B-movie melodrama, modish existentialism and pared-down film noir.” 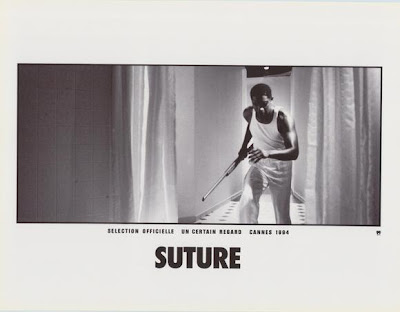 Suture’s initial conceit of two actors that look nothing alike playing brothers is pretty audacious and the biggest hurdle to pass if one is to get into the story. It does give the story some added resonance as notions of race and class are raised. When we first meet Vincent, he wears immaculate white suits and appears quite wealthy, driving around in an expensive car. Clay, on the other hand, arrives into town on the bus and dresses like a blue collar worker. Suture is also quite a fascinatingly complex psychological thriller. It is preoccupied with the notion of identity. How do we know who we are? How do our memories contribute to our identity? What happens when we no longer have memories to help define who we are? The film asks some pretty deep questions and wrestles with some pretty weighty themes for a noir. Clay has to assemble his identity like a jigsaw puzzle – piece by piece and it is only once he has everything in place that he is able to see the big picture.