Despite its impressive box office returns, Ocean’s Twelve (2004) was considered something of a disappointment by its director Steven Soderbergh who felt that the plot was too complicated. While not quite as fun as Ocean’s Eleven (2001), it was a fine film in its own right – one that had a more satisfying emotional pay-off and doesn’t deserve the lousy reputation that it seems to have. Ocean’s Thirteen (2007) was seen as a return to the fun, breezy vibe of the first film by bringing it back to Las Vegas with style. The result was a very satisfying conclusion to the Ocean’s films.

As the revenge picture cliché goes, this time it’s personal. When Reuben Tishkoff (Elliott Gould) is muscled out of a business deal by slick businessman Willy Bank (Al Pacino), resulting in a heart attack, Danny Ocean (George Clooney) and his crew reunite for one last job: to ruin the opening night of Bank’s casino, The Bank, by making sure he loses a huge amount of money, which involves rigging all the games and slot machines. Bank wants the Five Diamond Award – the top accolade for hotels and will do anything to get it. Danny and the boys use this as a way to get at Bank. To this end, they devise an elaborate plan with the help of their arch-nemesis Terry Benedict (Andy Garcia) who bankrolls the operation. They also bring in Roman Nagel (Eddie Izzard) from Ocean’s Twelve to crack a state-of-the-art artificial intelligence security system.

Soderbergh kicks things off rather stylishly as we get a beautiful shot of Rusty Ryan (Brad Pitt) walking across a runaway tarmac to an awaiting plane at dusk with the sky an impossibly deep dark blue that, accompanied by David Holmes’ groovy score, is absolutely breathtaking. Once again, the director shoots the hell out of the film by employing all sorts of zoom ins and outs, pans and split-screens that, along with a saturated color scheme, keeps things visually interesting.

This time out, Matt Damon gets a juicy subplot where he goes undercover as Lenny Pepperidge, the assistant to a Mr. Weng (Shaobo Qin as The Amazing Yen, also undercover), a very high roller, in order to get close to Bank’s lovely assistant, Abigail Sponder (Ellen Barkin). Part of his disguise involves wearing a ridiculous fake long nose – a sly fuck you to Harvey Weinstein who wouldn’t let Damon wear said nose for his character in Terry Gilliam’s The Brother’s Grimm (2005) because he felt it would obscure the actor’s good looks and hurt the film’s box office potential. Well, it didn’t hurt Ocean’s Thirteen box office as the film went on to gross a very respectable $311 million worldwide.

It is also a lot of fun to see Ellen Barkin reunited with her Sea of Love (1989) co-star Al Pacino. She appears to be having a good time playing a confident businesswoman succumbing to Damon’s “seductive” charms. It is also fun to see Pacino go off autopilot for a change and sink his teeth into a juicy bad guy role. Who else could Soderbergh get to pose as a credible threat to the likes of George Clooney and Brad Pitt but someone of the legendary star caliber like Pacino? He plays Bank like the offspring of his take on Ricky Roma from Glengarry Glen Ross (1992) and Gordon Gekko from Wall Street (1987) – a smooth-talking unscrupulous bastard. In another nice bit of casting, the inventor of the artificial intelligence security system is played by none other than Julian Sands, an actor whose big break through came in A Room with A View (1985) but whose career settled into mostly direct-to-home video fare so it was a pleasant surprise to see him appear in a big mainstream film like Ocean’s Thirteen.

Another amusing subplot involves Virgil Malloy (Casey Affleck, sporting a ridiculous-looking mustache) organizing a revolution/strike among the workers at a dice-making factory in Mexico. He goes from complaining about a lack of air conditioning to tossing Molotov cocktails on the strike lines. At one point, he and his fellow co-workers drown their sorrows at a local bar and Virgil asks them, “Have all of you forgotten Zapata?” He goes on to offer inspirational words that fire them up. How this whole subplot plays out is quite funny. In another nice twist, Terry Benedict is helping Danny out albeit with all kinds of conditions. After all, he resents Bank’s lack of taste and the competition he represents. There can only be on top dog in Vegas and Benedict clearly feels that he is the one. Andy Garcia looks like he relished the opportunity to be in on the joke instead of being the target as he was in the last two films.

While working on Ocean’s Twelve, Steven Soderbergh began thinking about Ocean’s Thirteen. He thought about how fun it would be to set it back in Las Vegas. The motivation to make the film was a desire to work with everyone again but all eleven cast members had to want to do it. Producer Jerry Weintraub contacted them 18 months before hand and told them filming would take place during the summer of 2006 and to clear their schedules. He was able to find a way to juggle all these movie stars’ busy lives and add Al Pacino and Ellen Barkin into the mix.

For the film’s story, Soderbergh felt that Danny and his crew weren’t driven entirely by money and that they would reunite for friendship and revenge. The director came up with the notion of Reuben being betrayed and his friends helping him out. Weintraub hired Brian Koppelman and David Levien to write the screenplay. They had written the script for Rounders (1998) and created the gambling television cable show Tilt, and so they were familiar with the world of con men and gamblers. Soderbergh and Weintraub were both big admirers of Rounders and the director met with the screenwriters in New York City over lunch. They talked about great con movies, the nature of heists, and how the characters had evolved since Ocean’s Eleven. Within minutes, Soderbergh knew they were who he wanted to write the script and were working on it within minutes: “There was not a long list of people that we thought could step into this specific universe and pick up the language and the sense of humor.” 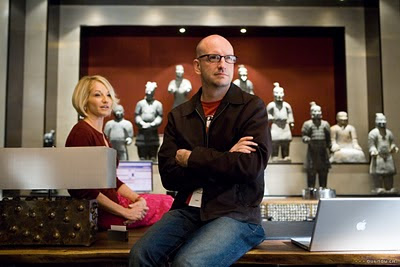 Koppelman and Levien had spent years exploring Vegas culture and the gambling lifestyle. They had every book they could find about con artists and thieves. Early on, Soderbergh told them that he wanted the film’s focus to be on the friendship between Danny and his crew. They understood that getting revenge on Willy Bank was what drove the entire story of Ocean’s Thirteen. They also wanted to “’flip’ the casino so that the patrons would win every time, which would spell disaster for Bank.” Soderbergh also told them that the bad guy should be a casino owner and they imagined Al Pacino and wrote Bank with him in mind. George Clooney also offered some ideas, mostly things to do with the revenge scheme that reunited the crew.

Some exterior scenes were shot in Las Vegas, but the casino interiors were mostly shot on one of the largest soundstages on the Warner Bros. lot in Los Angeles because it would have taken too long to film in actual casinos as they had done with Ocean’s Eleven. Soderbergh said, “In order to get the shots that I wanted, I needed to completely control the environment.” He instructed production designer Philip Messina to build a hotel and casino that would reflect Bank and his huge ego. Messina decided to go with a quasi-Asian theme and make it visually overwhelming. He purposely broke the rules in Vegas by designing a multi-level gaming floor because the production didn’t have a lot of horizontal space to work with.

Much like with Ocean’s Twelve, Ocean’s Thirteen received mixed reviews from critics. In her review for The New York Times, Manohla Dargis praised Soderbergh’s direction: “Playing inside the box and out, he has learned to go against the grain while also going with the flow. In Ocean’s Thirteen he proves that in spades by using color like Kandinsky and hanging a funny mustache on Mr. Clooney’s luscious mug, having become a genius of the system he so often resists.” USA Today gave the film three out of four stars and Claudia Puig wrote, “As escapist entertainments go, Thirteen is far from unlucky: It's breezy, clever fun and ridiculously easy on the eyes.” The Chicago Reader’s Jonathan Rosenbaum wrote, “Predictably adolescent and smarmy, with the mix of sentimentality and cynical flippancy that's becoming Steven Soderbergh's specialty (even when he's pretending to make art films), this is chewing gum for the eyes and ears, and not bad as such.” In his review for the Los Angeles Times, Kenneth Turn felt that it was better than Ocean’s Twelve but not as good as Eleven: “Though it's certainly serviceable as the second sequel to a remake, it lacks the brio and élan that made the 2001 film such a treat.”

On the other hand, Roger Ebert gave the film two-and-a-half stars out of four and wrote, “Ocean's Thirteen proceeds with insouciant dialogue, studied casualness, and a lotta stuff happening, none of which I cared much about because the movie doesn't pause to develop the characters, who are forced to make do with their movie-star personas.” In his review for The New York Observer, Andrew Sarris wrote, “for long stretches of the proceedings, Mr. Soderbergh seems to be trying to distract us from the suspenseless inevitability of the plot with semi-abstract rainbowish splashes of color.” Finally, the Washington Post’s Stephen Hunter wrote, “It's maybe halfway between okay and not bad. If being about average were a sin, it'd be headed straight to Hell on a bobsled.”

Like Ocean’s Eleven, Ocean’s Thirteen pays tribute to the classic era of Vegas as Danny and co. restore Reuben’s honor. He’s an old school player who still believes in following a code and prides himself in being part of a select group of insiders that got to shake Frank Sinatra’s hand back in the day. Like Benedict, Bank represents the current corporate mentality of making money over the personal touch that the Mob-run casinos used to provide. If the first two films were about Danny and Rusty’s respective relationships with the loves of their lives, then Ocean’s Thirteen is about their friendship with Reuben. He mentored them when they were just starting out and taught them about respecting history as well as those who came before them. Like with the previous films, going after the bad guy is a matter of personal honor and hitting them where it hurts – in Bank’s case it’s his monster ego. Ocean’s Thirteen ends much like Ocean’s Eleven did thus bringing the trilogy full circle and with a truly satisfying conclusion as the bad guy gets what’s coming to him and Reuben’s honor is restored. Likewise, the film did very well at the box office and garnered fairly positive reviews going out on a well-deserved high note. It serves as an example of a star-studded big budget Hollywood film that entertains without insulting your intelligence.