After the commercial failures of Full Frontal and Solaris in 2002, there was pressure on Steven Soderbergh, when he announced that his next film was to be the sequel to the wildly successful Ocean’s Eleven (2001), to not only come up with a box office hit but to also outperform the previous film. With big budget, star-studded casts like the one in Ocean’s Twelve (2004), there is always the danger of having them look too smug and self-indulgent instead of having fun along with the audience. Ocean’s Eleven managed to straddle this line quite well, resulting in an entertaining popcorn movie. Soderbergh kept his cast in check, never letting them go too far over-the-top and shooting it with a style that was always interesting to watch. The big question for the sequel was if he could pull off the same feat without repeating himself too much. Ocean’s Twelve ended making less than its predecessor (but still a lot of money) and cost more while also dividing critics but in some ways I find it a better film.

Danny Ocean (George Clooney) is supposed to be retired and enjoying domestic bliss with Tess (Julia Roberts). However, old habits die-hard and the lure of pulling heists is always calling. She catches him casing a jewelry story on their anniversary. To make matters worse, Terry Benedict (Andy Garcia) is still hot on their trail, tracking down all of the original eleven and letting them know, in his own casually menacing way, that he wants the $160 million, plus interest, that they stole from him in Ocean’s Eleven, and in two weeks time. The montage of him doing this mirrors the one in the first film where Danny and Rusty recruited their crew. If Benedict was an imposing figure in the first film, Andy Garcia makes him even more of a threatening presence in this montage by doing little except exude menace with his eyes and the all-business tone of his voice.

So, Danny gets everybody back together to figure out what to do. Obviously, they need to pull another job but they are too high profile in the United States, so they go to Europe and cross paths with a truly formidable opponent and rival master thief known as the Night Fox (Vincent Cassel), a bored French playboy. He’s jealous of Danny’s status as the world’s greatest thief and is out to prove that he’s the best by having the both of them go after the same thing: the Faberge Imperial Coronation egg. Vincent Cassel plays the Night Fox as an ultra-confident, cocky man in such a way that you want to see Danny and company knock him down a peg.

Ocean’s Twelve ups the difficulty level for our heroes even more by having most of the crew neutralized leaving only Basher (Don Cheadle), Linus (Matt Damon) and Virgil (Scott Caan) left to pull off an impossible heist. So, they bring in Tess to pose as, well, Julia Roberts. Unfortunately, another major movie star is staying at the same hotel, which only adds to the meta aspect. Said movie star gamely plays a fictional version of himself. The scene where he meets Tess as Julia Roberts is very amusing as Damon and Roberts act all star-struck in front of him. It is also interesting in that the meta aspect that was present in Ocean’s Eleven is made even more explicit – something that turned off some critics and audiences but I think works extremely well because Soderbergh isn’t having a cutesy cameo of a movie star for the sake of it but actually incorporating them into the plot and making them an integral part of the scam.

If the first film was about Danny’s redemption by reconciling with Tess, then Ocean’s Twelve is about Rusty’s (Brad Pitt) redemption by reconciling with his past love, Isabel Lahiri (Catherine Zeta-Jones), a determined and quite beautiful Interpol agent. Like Danny’s feelings for Tess potentially compromising his involvement in the heist in Ocean’s Eleven, Rusty’s feelings for Isabel leaves him potentially vulnerable in Ocean’s Twelve. To her credit, Catherine Zeta-Jones fits right in with the European vibe, maintaining just the right mix of determination in nailing Danny and his crew and vulnerability when she’s with Rusty. Their relationship elevates the film ever so slightly above the standard heist story and the conclusion of her subplot is surprisingly emotional and poignant – the highpoint of the trilogy and something you don’t expect from a film like Ocean’s Twelve, which is essentially a feature-length lark.

Matt Damon demonstrates excellent comic timing in this film and is the real stand-out of this strong cast. Early on, Linus asks Rusty if he could have more to do this time out and this moment comes across as quite self-reflexive. It’s as if Damon were almost asking if he could have more screen time in the film itself. In some respects, he is the group’s stammering conscience. There is an amusing scene where Linus, Danny and Rusty meet a contact by the name of Matsui (Robbie Coltrane) for a potential job. Danny, Rusty and Matsui all speak cryptically which leaves poor Linus totally confused. Damon plays the scene so well as he looks desperately to his cohorts for help or some sort of clue as to what he should say. Put on the spot, Linus finally responds by quoting lyrics from “Kashmir” by Led Zeppelin to hilarious effect.

While doing a press conference in Rome during the promotional tour for Ocean’s Eleven, Steven Soderbergh fell in love with the city and over dinner with producer Jerry Weintraub began thinking about the story and structure for a sequel. He got the idea to set it in Europe and was so inspired that he started writing down ideas. After returning to Los Angeles, Weintraub discovered George Nolfi’s screenplay, entitled Honor Among Thieves, about the greatest thief in America going up against his equal in Europe. It was originally developed for John Woo to direct but Weintraub sent the script to George Clooney, Brad Pitt and Soderbergh. The director came up with the basic idea for the film and thought that it “would be more fun if Twelve was the movie in which everything goes wrong from the get-go.” He ended up merging Nolfi’s script with his own ideas. Soderbergh saw this film as more emotional, character-driven and complicated on a narrative level than the first one.

Prior to the start of principal photography, which lasted 77 days, Julia Roberts found out that she was pregnant and Soderbergh incorporated it into the script. He also met with Vincent Cassel at the 2003 Cannes Film Festival and asked the actor if he would be interested in being in Ocean’s Twelve. He agreed without reading the script because he trusted someone with a reputation like Soderbergh’s. Once filming began, the production spent ten weeks globetrotting all over the world with stops in Chicago, Amsterdam, Paris, Monte Carlo, Lake Cuomo, and Rome. Principal photography concluded with four weeks on three Warner Brothers soundstages in L.A. 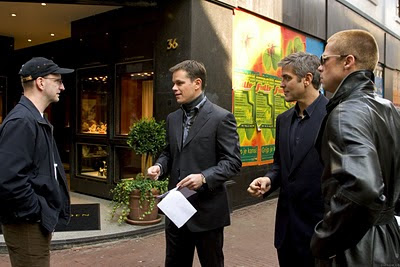 Not surprisingly, Ocean’s Twelve received mixed reviews. Roger Ebert gave the film three out of four stars and wrote, “The movie is all about behavior, dialogue, star power and wiseass in-jokes. I really sort of liked it.” In her review for The New York Times, Manohla Dargis wrote, “Ocean's Twelve may be slim pickings, but when a film contains a bit as sublime as Rusty putting the moves on a visibly startled Isabel while he's literally hotfooting it from the law it's the kind of movie moment that can tide you over for a week.” The Washington Post’s Desson Thomson wrote, “In this sprawling oglefest, such things as "narrative" and "story" are remote little abstractions indeed. Director Steven Soderbergh uses the same reality-show looseness he brought to his K Street television series.” USA Today gave the film three out of four stars and wrote, “Exuding heaps of postmodern cool — these guys never even break a sweat —Ocean's Twelve also gets comic mileage out of petty bickering among Danny's teammates.”

In his review for the Village Voice, Dennis Lim wrote, “Watching other people's vacation home movies is rarely this fun. Quick, cheap thrills spiked with a jazzy, retro new wave vibe, Ocean's Twelve suggests a double issue of Us Weekly guest-edited by the old Cahiers du Cinema crew.” However, Entertainment Weekly gave the film a “D+” rating and Lisa Schwarzbaum wrote, “What's on screen is lazy, second-rate, phoned-in — a heist in which it's the audience whose pockets have been picked.” The New York Observer’s Andrew Sarris felt that the film “Hits a new low in condescending facetiousness, with no fewer than 15 performers of varying talents, tongues firmly in cheeks, undercutting all the genre's action conventions while camping up a storm on two continents.” Finally, Slate’s David Edelstein wrote, “Ocean's Twelve disintegrates along with its linearity. Two days after seeing it, I can't even remember how it ended. But I do remember Julia Roberts' endearing whoops of panic.”


According to Soderbergh, Ocean’s Twelve tested as well with audiences as the previous film had. He, however, had to deal with expectations from the success of Ocean’s Eleven: “That is what this film confronted and got beaten by, because it’s a completely different movie from the first one. It’s weirder…in terms of the imagery and the music, it is unquestionably the most arresting of the three.”

Once again Soderbergh keeps the pace brisk and breezy, making the two-hour running time fly by. Like its predecessor, Ocean’s Twelve is beautifully shot with atmospheric lighting and saturated color as evident in the bright yellow that permeates Isabel’s Europol lecture or the green lighting that illuminates the underwater sequence during a heist that Danny and his crew pull off, or the red lighting that dominates the nightclub where Rusty and Isabel meet. Most of the film takes place in Europe and Soderbergh adopts the look of a European film from the 1960’s, which also applies to the eclectically groovy soundtrack from David Holmes that evokes a ‘60s Euro-lounge vibe. The director even described the film’s aesthetic as “the most expensive episode of a ‘60s television show ever.” He and Holmes agreed that the score would be completely different from Ocean’s Eleven in order to complement the different look and feel. Soderbergh is an excellent visual storyteller and this is evident in several scenes that he depicts without any dialogue, instead resorting to music married to visuals that conveys exactly what’s going on. He understands the kind of movie he’s making and doesn’t try to be too cute or wink knowingly at the audience, instead focusing at the task at hand: making a confident, entertaining movie. Granted, Ocean’s Twelve is no Traffic (2000), and it’s not meant to be, but you could do a lot worse with two hours of your time.