MGM MOD DVD of the Week: Queen of Blood / The Ambulance

BLOGGER'S NOTE: Kudos to MGM for following Warner Bros. lead by starting to offer some of their more obscure gems available through their Manufacturing-On-Demand (MOD) Platform. You’re essentially getting a very high quality DVD-R and with these new editions, fans can finally throw away their pan-and-scan VHS copies. 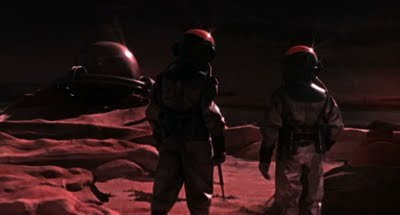 Released in 1966 as part of a double bill with fellow American International Pictures B-movie Blood Bath, Queen of Blood was assembled by director Curtis Harrington with footage from the Russian films, Mechte Navstrechu and Nebo Zovyot. It certainly has a distinctive look and atmosphere that suits its blend of horror and science fiction.


The opening credits play over a series of unsettling psychedelic paintings of what appears to be an alien landscape while appropriately creepy atmospheric music by Leonard Morand sets just the right mood of dread. Queen of Blood is set in 1990 where traveling to the Moon is no problem, space stations exist there, and the powers that be are looking into exploring Venus and Mars for signs of intelligent life. Cue cool looking shots of matte paintings depicting life on these planets and footage of an alien race in shadows, which gives an ominous teaser of what’s to come.

We soon meet our hero, Allan Brenner (John Saxon) as he has lunch with his girlfriend Laura James (Judi Meredith) and two fellow astronauts, Paul Grant (Dennis Hopper) and Tony Barrata (Don Eitner). This gives the filmmakers a chance for some wonderfully cheesy banter but you can tell that Dennis Hopper and John Saxon aren’t taking it all that seriously. Their lunch is interrupted by an announcement by Dr. Farraday (a slumming Basil Rathbone). He informs our heroes that they’ve finally received communication from an alien race that plans to send an ambassador to Earth.

The ambassador’s craft crashes on Mars and sends an SOS to Earth. So, Farraday sends Paul and Laura to check it out. When Paul and his crew run into trouble and find a dead alien on Mars, Alan and Tony fly there to help in the search for another alien craft. They find it and inside the sole survivor – a green-skinned female alien (Florence Marly). While the first two thirds of Queen of Blood is all set-up, in the last third all hell breaks loose when alien queen wakes up.

It’s wild to see Dennis Hopper play such a straight-laced role, especially during this period in his career when he had been blacklisted in Hollywood and was relegated to doing American International Pictures (AIP) films for Roger Corman. Just two years later, he would direct, co-write and star in Easy Rider (1969). John Saxon, god bless him, does his best to play the square-jawed hero of the film without a hint of irony. Florence Marly has such an expressive face, which is good because as the alien queen she has no dialogue and uses her creepy smile to captivate the male astronauts. In a nice touch, she also sports a fantastic beehive hairdo that also resembles an onion!

The 1960’s representation of alien beings looks great and oddly more “alien” than a lot of contemporary alien invasion films. It may be due to the fact that the style of that decade looks so foreign to us now. There is a simplicity to their look that is refreshing and the unsettling music really helps sell the otherworldly nature of these beings. The interior of the alien spacecraft evokes the style of Mario Bava’s Planet of the Vampires, released a year earlier in 1965. I love the wonderfully clunky-looking astronaut gear – their helmets are huge and don’t move at all, restricting movement in an awkward way. There’s something great about knowing that all the special effects in Queen of Blood were done by hand. It gives everything an authentic quality. It doesn’t have the unreal artificiality of a lot of CGI – no matter how good it looks you know that what you’re seeing doesn’t exist. The hand-made sets and special effects have a clunky charm all their own and this is one of the pleasures of this film. 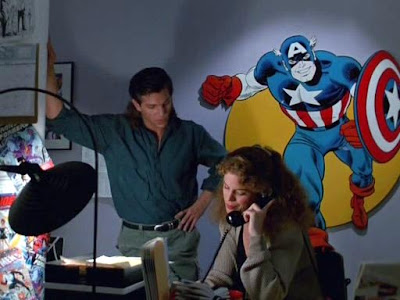 Eric Roberts has had an odd career that never reached its full potential. In the early 1980’s, he was part of an exciting generation of up and coming actors that included the likes of Mickey Rourke, Sean Penn and Gary Oldman, and delivered intense, powerful performances in films like Star 80 (1983) and The Pope of Greenwich Village (1984). But then a combination of substance abuse problems and bad career choices soon found Roberts burning many bridges in Hollywood. He became a staple of direct-to-video dreck, popping up in the occasional mainstream film in a supporting role. Roberts ushered in the 1990’s with the cinematic oddity known as The Ambulance (1990), an offbeat thriller written and directed by cult film director Larry Cohen.


Josh Baker (Eric Roberts) is a comic book artist infatuated with a beautiful woman named Cheryl (Janine Turner) that he spots on the streets of New York City at the same time every day. In the middle of trying to sweet talk her into a date, she faints. An ambulance arrives and takes her away. After work, Josh goes to several hospitals in the area but they have no record of her. It turns out that she’s being held against her will at some secret facility that looks like it was lit right out Dario Argento’s Suspiria (1977). It turns out that Cheryl is being tormented by a creepy doctor (Eric Braeden) who likes to touch human skin through surgical gloves. Meanwhile, Josh seeks help from Lieutenant Spencer (James Earl Jones) and so begins a series of crazy misadventures that rival Martin Scorsese’s After Hours (1985) – albeit through Larry Cohen’s gonzo B-movie sensibilities.

Eric Roberts has dabbled in almost every film genre and played all kinds of roles but he’s known mostly for playing heavies. The Ambulance is a refreshing change of pace as he plays an idealistic romantic (who sports a spectacular mullet ‘do I might add). Josh is willing to go to great lengths to track down this mystery woman and Roberts portrays him as a genial motormouth type that Robert Downey Jr. has perfected over his career. It’s interesting because Roberts brings his customary intensity to the role but channels it in a way that is fascinating to watch. This character allows the actor to play a wide spectrum of emotions as he keeps up with the film’s wild, tonal shifts from romantic comedy to thriller. It is also fun to see him bounce off all sorts of oddball characters, like James Earl Jones’ angry police detective or Red Buttons’ sarcastic hospital patient or Eric Braeden’s creepy yet suave doctor. In a nice touch, Josh works at Marvel Comics (?!) and so we are treated to a cameo from Stan “The Man” Lee himself.

It is also interesting to see how Cohen slots a romantic character like Josh into this, at times, sinister thriller. And yet, the filmmaker subverts genre conventions with constant absurd flourishes that reflect Josh’s increasing (and warranted) paranoia. Cohen injects all sorts of inventive plot twists to keep us guessing just how The Ambulance is going to turn out. Will Josh find the girl of his dreams and rescue her from the evil doctor?