DVD of the Week: The Happening 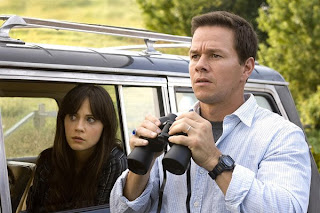 In retrospect, M. Night Shyamalan peaked with The Sixth Sense (1999), a film that was a massive critical and commercial success. Naturally, it would be the yardstick that every subsequent film he made would be judged by. To Shyamalan’s credit, he tried his hand at other genres with the superhero film (Unbreakable), science fiction (Signs), and fantasy (The Lady in the Water) with varying degrees of success. Once a critic’s darling, Shyamalan has become their whipping boy with his last two films, The Village (2004) and The Lady in the Water (2006) – the latter was particularly savaged.

With the announcement that his next film, The Happening (2008), would be an R-rated apocalyptic horror film, there was hope that this might be a return to form for the enigmatic auteur. The film performed well at the box office and was predictably vilified by critics. Now that the dust has settled, is The Happening really that bad?

The opening credits play over clouds moving ominously across the sky to tense music reminiscent of the opening of Invasion of the Body Snatchers (1956) – one of the films Shyamalan has credited as an influence on The Happening. One day in , strange things start to happen: a woman stabs herself in the neck and construction workers inexplicably jump off a building that they are working on to their death.

Elliot Moore (Mark Wahlberg) is a high school science teacher who tells his class about the disappearance of bees. The principal of his school sends everyone home early once word of what is going on in gets out. The authorities conclude that this is a result of some kind of chemical attack by terrorists and order the evacuation of .

Fearing that this might happen in Philly, Elliot, his best friend Julian (John Leguizamo) and his daughter Jess (Ashlyn Sanchez), and Elliot’s wife Alma (Zooey Deschanel) get out just in time as in the city is hit with the same bizarre behavior – people inexplicably killing themselves. This threat spreads throughout the north east portion of the and is so widespread that the likelihood that this is an act of terrorism is pretty remote.

Shyamalan does a pretty good job of building the dread with some chilling shots, like that of the construction workers jumping off a building en masse like lemmings, and a man walking into a lion exhibit in the zoo only to be willingly ripped apart by the animals. The fact that these things happen suddenly and with no explanation is all the more disturbing. What is causing people to kill themselves on such a large scale?

However, there’s an awkward subplot involving the strained relationship between Elliot and Alma that is unnecessary and distracting. This should have been jettisoned entirely with additional time spent on Julian’s quest to find his wife, which is given very superficial treatment in the film and comes across as almost an afterthought by Shyamalan. His clumsy attempts at humor are also a distraction but are thankfully few and far between. Shyamalan also insists on getting very mannered performances out of his actors, in particular Mark Wahlberg’s overly earnest performance and the normally wonderful Zooey Deschanel’s lifeless delivery of her lines, which can be annoying at times. 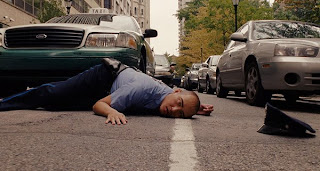 You have to give Shyamalan credit for having the balls to deliver his harshest film to date as he coldly dispatches men, women and children in somewhat grisly fashion. The Happening has its flaws, of which are numerous, but it certainly is not the cinematic train-wreck most critics would have you believe.

There are four deleted scenes with optional introduction by M. Night Shyamalan. The original opening scene of the film featured Elliot and have a big fight which informs the tension between them later on. However, it provided too much backstory and isn’t very well-written or well-acted and was thankfully not used. A more gruesome version of the lion attack is included, as is another death scene that takes place at a piano recital but was taken out for being one too many. Finally, there is an extended death scene that takes place towards the end of the film that is slightly more graphic.

“The Hard Cut” examines Shyamalan’s desire to make a hard R-rated horror film and one scene, in particular, which definitely earned the rating. Ironically, it was the studio that first suggested going for an R-rating and then the director agreed.

“I Hear You Whispering” takes a look at the sequence in the film where our heroes meet the crazy Mrs. Jones (Betty Buckley), a woman far removed from society and who serves a warning for that kind of isolationist attitude.

“Visions of The Happening: A Making Of” features plenty of on the set footage of Shyamalan and co. working on the film. The filmmaker wanted to tell an apocalyptic story that harkened back to paranoid thrillers of the 1970s. He wrote the role of Elliot for Wahlberg who studied Shyamalan in order to get a handle on his character. This is a nice look at how the film came together.

“A Day for Night” takes us through a typical day of Shyamalan’s while working on The Happening. It shows the mundane task of setting up shots, and so on. 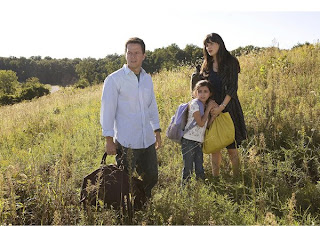 “Elements of a Scene” examines how they did the car crash scene in what looks like one shot. Naturally, CGI was used to pull off this impressive shot. This featurette takes us through it step-by-step.

Finally, there is a gag reel that shows the cast and crew goofing off in between takes and having fun.