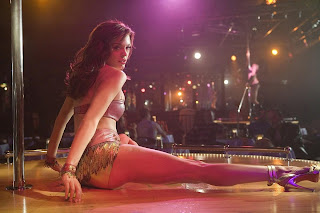 Robert Rodriguez and Quentin Tarantino are hardcore film buffs that grew up to become very successful filmmakers and friends who have collaborated on several projects over the years. Recently, they decided to indulge their love of Grindhouse movies from the 1970s (low budget exploitation films that pushed the boundaries of good taste) by each making their own motion picture and then releasing them together on a double bill just like the original films back in the day. The Weinstein brothers, god bless ‘em, went for the idea but made the critical mistake of releasing them on Easter weekend (cheeky counter-programming that backfired) and failed to emphasize that people were going to see two films for the price of one. As a result, attendance was poor and those who did go, some left after the first film. The Weinsteins freaked and when it came to distributing the double bill outside of , they split them up. Thus ended an interesting experiment and the first financial flops for both Rodriguez and Tarantino (although, both of these films should easily make their money back on DVD).

Rodriguez’s film, Planet Terror (2007), introduces Cherry Darling (Rose McGowan), a beautiful go-go dancer who dreams of becoming a stand-up comedian even though nobody finds her particularly funny. Meanwhile, at a nearby military base, a deal between Lt. Muldoon (Bruce Willis), a no-nonsense officer, and Abby (Naveen Andrews), a shady scientist, goes bad and some nasty, toxic fumes are released into the atmosphere. Back in the town, Dr. William Block (Josh Brolin) and his wife Dr. Dakota (Marley Shelton) deal with a patient (Nicky Katt) suffering from a nasty looking bite wound. Pretty soon, more and more people show up with similar kinds of wounds. Cherry crosses paths with her ex-boyfriend, a tow truck driver by the name of El Wray (Freddy Rodriguez). They get involved in a car accident and she loses her leg to some diseased and infected zombies with gross, puss-filled wounds. Before you know it, infected townsfolk turned zombies start over-running the town, forcing Cherry, El Wray, Dakota and others to team-up and start kicking ass.

Two of the most significant cinematic influences on Rodriguez’s films are genre filmmakers George Romero and John Carpenter. After all, The Faculty (1998) was Rodriguez’s nod to Carpenter’s remake of The Thing (1982) while From Dusk Till Dawn (1996) had the same kind of siege mentality as Romero’s Dawn of the Dead (1979) and Carpenter’s Assault on Precinct 13 (1976) and featured long-time Romero collaborator Tom Savini. Much of Planet Terror’s soundtrack features an atmospheric Carpenter-esque electronic score with a dash the Goblins’ menacing soundtrack work from Dawn of the Dead.

With Planet Terror, Rodriguez gets to make his own zombie movie with a Carpenter-esque badass protagonist. Rose McGowan and Freddy Rodriguez make for an ideal, no-nonsense couple right out of a Carpenter film. El Wray harkens back to tough guy protagonists like Snake Plissken from Escape from New York (1981) or Nada from They Live (1988) complete with his own recurring credo, “I never miss” that is reminiscent of Jack Burton’s “It’s all in the reflexes,” from Big Trouble in Little China (1986). Like them, Wray has a mysterious past, is a man of few words, and lives for the next 60 seconds, while Cherry starts off as a homage to the beautiful and jaded go-go dancers in Russ Meyer’s Faster Pussycat, Kill! Kill! (1965) during Planet Terror’s opening credits as McGowan bumps and grinds her way through an appropriately sleazy tune. Over the course of the film, Cherry is transformed into a machine gun-toting babe . . . it just so happens that the gun is strapped to her stump. McGowan is definitely not the most skilled thespian but her limitations are perfect for this tribute to schlock. And like Carpenter, Rodriguez knows exactly how to make his heroes look cool, like in the scene where Wray stabs and slashes his way through a hospital of infected zombies. 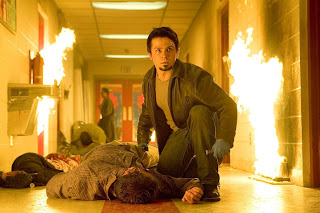 Rodriguez pays homage to 1980 and 1990s genre character actors with the casting of Michael Biehn as the town sheriff (The Terminator, Aliens), Jeff Fahey as a grizzled chef (Body Parts), and make-up effects legend Tom Savini as an incompetent deputy who meets his demise in a sequence reminiscent of one of his most spectacular gore gags from Day of the Dead (1985). These guys have suffered through quite a few lean years filled with forgettable direct-to-video fare and it’s great to see them getting juicy, prominent roles to remind everyone how great they were and can still be given the right material. Fahey, especially, is excellent as J.T., owner of the local diner and who keeps his delicious BBQ sauce a secret from everyone. He starts off as a source of comedy, the grizzled chef stereotype (“Now that’s rump roast,” he says as hew watches the curvaceous Fergie drive away) but towards the end of the film he gets a rather poignant scene as he’s reunited with his brother. Fahey really sells the scene with his sad eyes and he has great chemistry with Biehn – someone should really pair these guys together in a buddy action flick. Biehn, who had such a great run in the ‘80s as James Cameron’s go-to guy, gets to do what he does best by playing a gruff, intense man of action. His antagonistic relationship with Rodriguez’s El Wray is established early on and plays well over the course of the film until they finally develop a grudging respect for each other.

In comparison to the energetic Planet Terror, Tarantino’s Death Proof feels bloated and stagnant. The three girls we meet at the beginning of the film are all wrong. Girls that age don’t talk like that. They don’t name-check Vanishing Point (1971) and they don’t listen to the kind of music that they do in the film – songs by the likes of Joe Tex and The Coasters?! Maybe one of the girls but not all of them. The dialogue they spout sounds like girls trying to impress a director like Tarantino. I expected to be disappointed by this film but it was even worse than I had feared. If the mandate set forth by Rodriguez and QT was to pay homage to the Grindhouse films of the 1960s and 1970s, than the former succeeded where the later failed. QT created a talkie instead of a Grindhouse film. What is the prevailing motif in Death Proof, boring dialogue? The only Grindhouse-esque touch is QT’s foot fetish with lots of lingering close-up shots of young women’s feet. That’s not really my thing, but hey, whatever floats your boat, I suppose. Is Death Proof actually Steel Magnolias (1989) for the Fergie set? It is hard to make Kurt Russell look bad in a film but he hasn’t looked this bad since Captain Ron (1992). 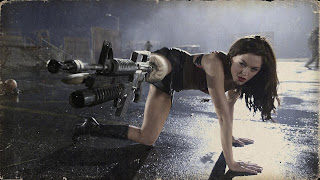 To further the homage to the Grindhouse aesthetic, Rodriguez digitally altered the transfer so that it resembles a crappy, worn-out print that you would see back in the day, complete with bad splices, lines through the image, fading colors, and even a missing reel. It’s ironic that he is using cutting edge technology to make an old school, low-tech film. Rodriguez is clearly having a blast with the genre as he gleefully throws in all sorts of over-the-top gore, sex, random large explosions, and wildly inventive action sequences as you would come to expect from one of his films. He is also not afraid to kill of animals, women, and the ultimate taboo – children. Would Planet Terror ever have appealed to a mainstream audience? Probably not. It was destined to develop a cult following which home video will no doubt help develop. All I know is, if I was a teenager, Planet Terror probably would have been my favorite film of all time. Rodriguez is more successful at emulating/paying homage to the Grindhouse genre than QT and Death Proof, especially with his faux trailer for Machete (which I hope he makes good on his promise to make into a feature-length film), even if he’s really celebrating ‘80s genre films.