DVD of the Week: The Mist: 2-Disc Collector's Edition 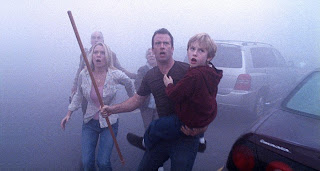 After a violent storm knocks out their power and puts a tree through one of their windows, David (Thomas Jane) and his son Billy (Nathan Gamble) go into town for supplies with their next-door neighbor Brent (Andre Braugher) along for the ride. They are in the supermarket for only a few minutes when they hear the chilling sound of air raid sirens followed by a frantic man (Jeffrey DeMunn) who rushes in yelling about how the mist took a man away. No sooner does he say this then a fast-moving mist envelopes the entire area forcing everyone in the store to hold up until they can figure out what to do.

Everyone has a theory as to its source: fallout from a possible chemical explosion at the local mill, some freaky weather system or maybe it has something to do with the nearby top secret military base? However, when David and a few others go to check out the back-up generator in the recesses of the store, one of them is attacked by multiple tentacles coming out of the mist, suggesting something more supernatural is lurking in the mist. They go back to the rest of the people and try to explain what they saw and what happened.

Naturally, some are skeptical, but the longer everyone stays cooped up and are eventually assaulted by all sorts of horrific creatures that come in waves, like Biblical plagues, the more tempers get frayed. A line is drawn between those who believe that this threat is some form of religious retribution, led by Mrs. Carmody (Marcia Gay Harden), and those who believe that there is some kind of malevolent force out there but use logic and reason to figure things out.

Darabont does an excellent job establishing the characters, the dilemma they all face, and then pitting them against each other. Some critics had problems with the shrill, Bible-thumping character of Mrs. Carmody as being an easy caricature; however, by the end of the film, all of the things she has said come true. As anyone who has read any of Stephen King’s fiction or seen one of his adaptations knows, a recurring motif is how the internal squabbling of a large group of people is as much of a threat as the horror that threatens them. King shows how fragile the trappings of society are and how it only takes one thing to trigger its collapse. 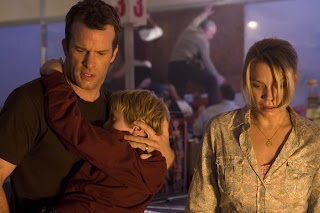 What is so refreshing about The Mist is how flawed the characters are as represented by David, a movie poster artist and the film’s hero. He gets scared and makes mistakes but rises to the occasion when needed. Is he any less of a hero for doing what he does in the film? Darabont raises some fascinating questions about the notion of heroics and this is masterfully realized by Thomas Jane’s wonderfully layered performance. The filmmaker has created a clever, tension-filled apocalyptic monster movie that has the balls to go out on such a daring sucker-punch of an ending that really pissed off some fans of the original novella. Darabont’s film remains true to the spirit and vibe of King’s story despite the radical reworking of the ending.

The first disc features an audio commentary by writer/director Frank Darabont. He spends the bulk of the track pointing out how he cut costs on this modestly budgeted film and gives credit to the crew members who helped him make it, in particular, the effects people. Darabont goes into the nuts and bolts of filmmaking but the highlight is his explanation/justification of the film’s controversial ending. As always, he delivers thoughtful observations and imparts loads of information.

Also included are eight deleted scenes with optional commentary by Darabont. One scene provides an interesting bit of insight into Brent’s character. There is more of David and Ollie trying to convince the others early on about the outside threat. Also included are more of Mrs. Carmody’s religious ramblings.

“Drew Struzan: An Appreciation of an Artist” is a profile of this prolific movie poster artist. He has done some of the most memorable posters of all time, including ones for the Star Wars films, E.T. (1982), Blade Runner (1982), and the Indiana Jones films to name but a few. Darabont points out that the introduction of David working in his studio in the film is a tribute to Struzan.

There are three Webisodes hosted by Darabont that provide a behind-the-scenes look at three scenes in the film and show what it looks like on the set juxtaposed with final product. We get to see how they did various practical effects in these scenes.

The second disc features a black and white version of the film that Darabont claims, in his introduction to it, is his preferred version because it was intended as an homage to classic horror films of the mid-1960s.

“When Darkness Came: The Making of The Mist” takes a look at the origins of the film. Darabont had always wanted to make a horror film and after making two non-horror Stephen King films, he decided to do The Mist. King sings Darabont’s praises and talks about how he trusted the filmmaker with the material. There is plenty of on the set footage where we see the cast and crew in action. None of the major studios wanted to do it but Bob Weinstein gave it the greenlight so long as Darabont agreed to do it cheaply and in very little time. This is an excellent look at how this film came together.

“Taming the Beast: Shooting Scene 35” takes a look at the scene where the mutant bugs and birds invade the supermarket. It’s the most action-packed scene in the film and was a challenge to shoot and coordinate because it involved a tricky combination practical and digital effects, lots of extras, and stunts.

“Monsters Among Us: A Look at the Creature FX” examines the designs for the various creatures in the film. He employed effects legend Greg Nicotero and illustrator extraordinaire Bernie Wrightson to design them and make them exotic-looking yet realistic enough so it seemed like they could really exist. It was a mix of CGI and practical mechanical creatures and puppetry. 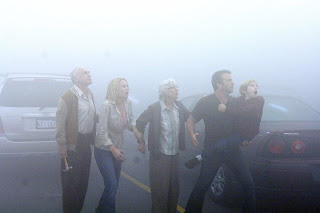 Finally, there is “The Horror of It All: The Visual FX of The Mist” which takes a look at Café FX’s work on the film’s visual effects. Their main guy used to do prosthetic effects and so he had an idea of what would be practical and what would be CGI. His company had very little time and we see the various stages of the effects. We also see how various effects shots in the film were achieved.