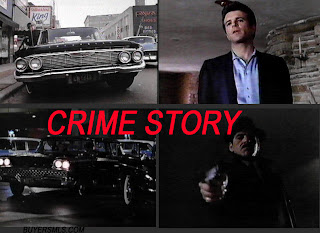 Fresh from the success of Miami Vice in the mid-1980's, Michael Mann parlayed his powerful clout to produce a new television show entitled, Crime Story. It was a pet project that he developed with good friend, Chuck Adamson and Gustave Reininger. Like Vice, Crime Story was a cop show but set in the early 1960s and with a grittier, darker edge as opposed to the stylish, brightly-lit pastel look of its predecessor. To this end, Mann not only cast outsider, Dennis Farina (whose unconventional looks must've terrified NBC executives), but had exploitation filmmaker, Abel Ferrara direct the pilot episode. The result is a lean, mean drama that features politically incorrect police officers battling it out with nasty criminals.

The pilot episode for Crime Story begins with a daring restaurant robbery gone badly. Del Shannon sings "Runaway" (re-recorded especially for the show) as the hold-up turns into a hostage situation. Three police detectives led by Mike Torello (Dennis Farina) race to the scene (blink and you'll miss a young Michael Rooker as a beat cop). No words are spoken between the men as they calmly check their guns and get ready. As the criminals are about to take off with their hostages, Torello leans in menacingly and says to one goon, "you hurt anybody else, when this is all over I'm gonna find what you love the most and I'm gonna kill it. Your mother, your father, your dog. Don't matter what it is – it's dead." Welcome to the world of Crime Story.

It turns out that the criminals are working for local wise guy, Ray Luca (Anthony Denison), a vicious thug with a short fuse and an awesome pompadour that defies gravity. This guy isn't afraid to smash bottles and furniture over hapless underlings to get his point across. Luca plans to steal some valuable European royalty jewels from the Lakeshore Museum but Torello intends to link the restaurant robbery to the thug and stop the heist from going down.

Mann has said that he was influenced by working on the Police Story T.V. series (1973-1977), which was run by playwright Liam O'Brien and included famous crime writer, Joseph Wambaugh (who wrote The Onion Field) as a contributor. Each episode was based on a real event, working with the policeman whose story it was based on. Mann "learned a lot about writing and about working with real guys." Crime Story was based on the experiences of Chuck Adamson, a former police detective of 17 years. He claimed that the stories featured on the show were composites rather than actual events that happened, “but they’ll be accurate.” According to Mann, the genesis of the project was to follow a group of police officers in a major crimes unit in 1963 and how they change over 20 hours of television. He asked Reininger and Adamson to write the series pilot and a "Bible." 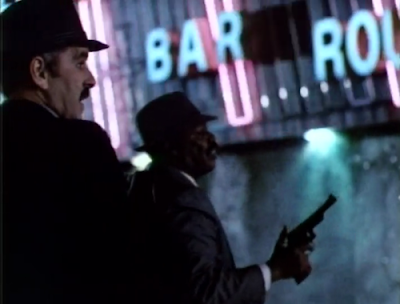 Reininger was a former Wall Street international investment banker who had come to Mann's attention based on a screenplay he had written about arson investigators, and a French film that he had written and produced. Reininger researched Crime Story by winning the confidence of Detective William Hanhardt who put him in touch with undercover officers in . They sent him on meetings with organized crime figures. Reininger risked wearing a body microphone and recorder. After visiting the crime scene of a gruesome gangland slaying of bookmaker Al Brown, Reininger backed off his Mob interviews.

Mann said that the first season of the show would go from in 1963 to in 1980 where the characters would have "very different occupations, in a different city and in a different time." He said, "It's a serial in the sense that we have continuing stories, and in that sense the show is one big novel." Mann and Reininger's inspiration for the 1963-1980 arc came from their mutual admiration of the epic 15+ hour film, Berlin Alexanderplatz (1980), by German director Rainer Werner Fassbinder. Mann said, "The pace of our story is like the speed of light compared to that, but that's the idea – if you put it all together at the end you've got one hell of a 22-hour movie."

NBC President Brandon Tartikoff gave an order for a two-hour movie, which had a theatrical release in a handful of theaters to invited guests only. Tartikoff also ordered 22 episodes which allowed Reininger and Adamson to tell a story with developing character arcs, and continuing stories (instead of episodic, self standing shows). Mann predicted a five-year network run for the show. However, due to budgetary constraints (the need for four sets of cars proved to be too expensive). Tartikoff eventually allowed their series to move to for the last quarter of the 22 episodes. By the second season, an average episode cost between $1.3 and 1.4 million because it was shot on location, set during the 1960s and featured a large cast.

However, they realized that it was too expensive to go through several different period changes in one season. Universal Pictures decided not to make Crime Story because they deemed it too expensive and a small studio called New World Pictures Ltd. stepped up to finance it. It allowed them to work in the big leagues with a major T.V. network like NBC and a chance to sell the show overseas while Universal would retain the domestic syndication rights. The production schedule was a grueling two episodes every three weeks shooting 12 hours a day or more every day of the week. 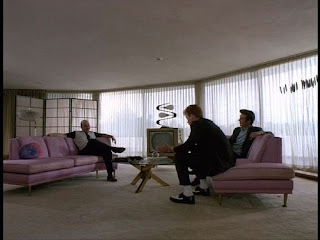 One of the most distinctive aspects of Crime Story is the look, the attention to period detail. Hilda Stark worked as an art director on the pilot and was asked back by Mann after seven episodes to be the production designer. To achieve the show’s period look, she and her team would go to second-hand and antique stores, run ads in the in newspapers seeking articles from the period, and sometimes build furniture if they could not find it. According to Stark, the overall design or look of the show featured “a lot of exaggerated lines. We go for high style – sleek lines and high style. . .We go for the exaggerated shapes that recall the era.” Stark and her team also came up with a color scheme for the show that featured “saturated color, and certain combinations – black, fuchsias – reminiscent of the ‘50s.” She finds inspiration from a library of old books and magazines, in particular Life. For the vintage cars in the show, they buy or rent from private owners.

It's a testimony to Mann's reputation at the time that Crime Story was even greenlighted. NBC would have never gone for the casting of Dennis Farina, with his pockmarked face and lack of acting experience, had Mann been a neophyte producer with no proven track record. The choice of cult film director Abel Ferrara must have also freaked out network execs. His previous films included The Driller Killer (1979), where a deranged psycho gruesomely kills people with a power tool, and Ms. 45 (1981), where a rape survivor viciously kills the men who attacked her with a .45 pistol.

And yet, the final product proves that Mann's instincts were right on the money. Farina delivers the hard-boiled dialogue with the perfect amount of intensity (Farina orders a loose cannon cop, "why don't you get unconscious for awhile."). You can see it in his eyes and the way he barks out orders that this a no-nonsense guy who isn't going to let anything get in the way of his job. In many respects, he is the prototype for Al Pacino's equally driven cop in Mann's Heat (1995). Farina's Torello is the prototypical Mann protagonist: professional and a perfectionist, all at the expense of everything else. 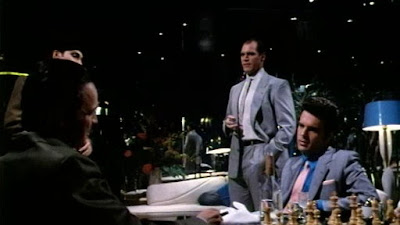 directs with the same proficient skill of crime auteur, Don Siegel. Like Siegel's two best crime films, Charley Varrick (1973) and The Killers (1964), Crime Story depicts a harsh world where life is cheap and characters will do anything – even if it means bending or breaking the law – to achieve their goals. Crime Story would provide the blueprint for 's later forays into urban crime films like The King of New York (1990) and Bad Lieutenant (1992).

When the show debuted on September 18, 1986, following Miami Vice, the two-hour pilot had a 20.1 national Nielsen rating and a 32 percent audience share. The ratings dipped when it was counter-programmed against ABC's Moonlighting. By October, the show dropped below a 22 Nielsen share, where a series is deemed a "failure.” Despite low ratings, Crime Story was picked up by NBC to finish the 1986-87 season. This prompted the network to move the show to Friday nights after Miami Vice on December 5, 1986, where its ratings improved but it still lost to Falcon Crest. NBC temporarily pulled Crime Story off the schedule on March 13, 1987. In order to get more people to watch, Farina and other cast members promoted the show in five cities.

The New York Times wrote, "With its first-rate cast, Crime Story might have had the offbeat, compelling authenticity of an Elmore Leonard novel. But the show looks suspiciously as if it would be more than willing to settle for the mindless glitz of Miami Vice.” In his review for the Washington Post, Tom Shales wrote, "When the smoke clears away, a viewer may feel impressed yet unmoved. But then, if all the smoke cleared away, there'd be no show.” John Haslett Cuff, in his review for the Globe and Mail, wrote, "The characters and locales are as greasy as the rain-soaked streets, and in the show's best moments there is a dangerous glitter that happily transcends the cartoon violence of too much television.” 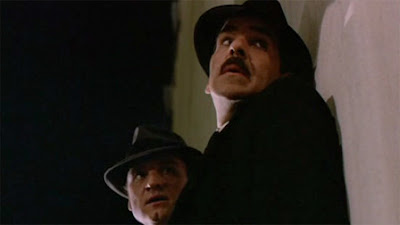 One of the most striking aspects about Crime Story is that it feels like it was ripped right from the pages of a James Ellroy novel. It is even more surprising that this show was done before Ellroy had written his famous L.A. Quartet of books that featured L.A. Confidential, which Crime Story most closely resembles. The author claims that he hadn't seen the show until after he wrote these novels but he does admit to being a fan since then. In an interview with Paul Duncan, Ellroy said, "I think Dennis Farina as Lieutenant Mike Torello is a force of nature. When the hatred between him and Anthony Denison fuels the plot, it's great, it's epic. but after a while it just goes to hell." This, of course, begs the question, when is someone going to reunite Farina and to do a proper Ellroy adaptation? Having them tackle White Jazz or American Tabloid would be a dream come true.