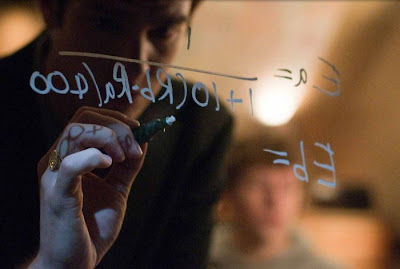 A film about the creation of website – really?! Have we finally run out of ideas for stories to tell? There must’ve been something deeper, more intriguing enough to attract the likes of screenwriter Aaron Sorkin and director David Fincher as their involvement in The Social Network (2010) gives the film a lot of credibility. Based on the “non-fiction thriller,” The Accidental Billionaires by Ben Mezrich, the film chronicles the origins of the immensely popular social networking website Facebook and turns out to be a familiar story about greed, jealousy and power – a study in class warfare: old money vs. New Economy dot com millionaires. What started as an idea shared among a small group of Harvard University students eventually became the domain of one person: Mark Zuckerberg. However, after Facebook became a legitimate global phenomenon and he became a billionaire, the others wanted in on the action (and the money) and lawsuits and court battles ensued. Because the notion of authorship is in question, Sorkin and Fincher apply the structure of Citizen Kane (1941), by telling the story via flashbacks from multiple points-of-view, while viewing it all through a detached journalistic viewpoint reminiscent of All the President’s Men (1976). The end result is an engrossing, intelligent look at young, ambitious men who made something that altered the popular culture landscape forever.


Harvard undergrad Mark Zuckerberg (Jesse Eisenberg) is super smart but socially inept, saying all the wrong things and this is readily evident in the film’s prologue when his girlfriend Erica (Rooney Mara) dumps him, and seals the deal by telling him that he’s an asshole. Motivated by being dumped in public, he vents his frustration on his blog with a vicious diatribe. To get his mind off it, Zuckerberg creates a website called “Face Mash” comparing all the girls at school with each other. He does this by hacking his way into other websites on campus. With the help of his friend and fellow classmate, Eduardo Saverin (Andrew Garfield), Face Mash becomes a hit – so much so that it crashes the school’s computer network. Fincher quickly establishes Zuckerberg as a computer programming genius and, along with Trent Reznor and Atticus Ross’ pulsating electronic soundtrack, actually makes the sequence where the proto-Facebook website is created look cool. Reznor and Ross’ dark, brooding score perfectly complements Fincher’s often gloomy, atmospheric imagery. The director juxtaposes this sequence with a party at the school’s most exclusive club, the Phoenix S-K Final Club, in order to show how they both end up objectifying women, reducing them to sex objects for horny, young men.

Zuckerberg is busted for invasion of privacy and is approached by Cameron and Tyler Winklevoss (Armie Hammer) who have created a crude prototype of Facebook and they ask him to merge his ideas with their own. In return, they’ll introduce him to the higher social strata of Harvard. However, Zuckerberg’s gateway to the big time occurs when he meets Sean Parker (Justine Timberlake), the co-creator of the Napster, an infamous and very popular music file sharing website. Parker is a persuasive speaker and his slick ways impresses Zuckerberg as he sells him on the potential of Facebook on a global scale. Parker introduces Zuckerberg to nightclubs and, more importantly, appeals to his antisocial tendencies. Justin Timberlake does a fantastic job of playing Parker as a smooth-talking salesman cum New Millennium con man who is smart enough to recognize the Next Big Thing, latch onto it and ride it out to fame and fortune. He delivers a playful performance and there’s more than a whiff of a master manipulator as Parker comes across as someone who had an ethics bypass at birth. There is a delicious irony seeing a slick performer like Timberlake playing a slick entrepreneur like Parker. It’s like Parker is the Silicon Valley Tyler Durden from Fight Club (1999) to Zuckerberg’s socially awkward hacker. Parker is Zuckerberg’s unchecked id as he surreptitiously drives a wedge between the young programmer and his best friend Saverin.

Jesse Eisenberg is a revelation as he’s cast against type in The Social Network. Known for playing stuttering, loveable neurotic characters in films like The Squid and the Whale (2005) and Adventureland (2009), he shifts gears to play an aggressively ambitious nerd. His take on Zuckerberg is that of an extremely logical person with loads of talent to burn and who is motivated by rejection. He comes across as an insensitive prick that doesn’t have the time for people who can’t keep up with him and his fast mind. The film posits that the main motivational factor for him doing what he did was to climb the social ladder, to make money and to be the head of an exclusive club where he has the power to accept or reject people instead of being the one on the outside looking in. However, when it gets down to it being spurned by Erica was the prime motivator for Zuckerberg creating Facebook. 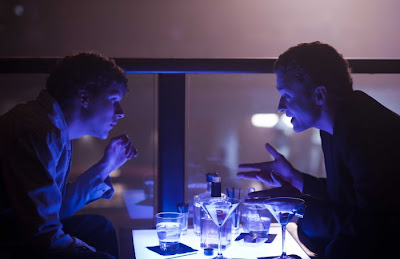 After making the popular tear-jerker The Curious Case of Benjamin Button (2008), Fincher returns to the moody, journalistic approach he took with Zodiac (2007), but where the latter was a slow burn over almost three hours, The Social Network moves along at a very brisk two hours as the talented young cast delivers Sorkin’s wordy screenplay in his trademark rat-a-tat-tat style. This film is absolutely dense with dialogue, even topping Zodiac with all of its scenes of theorizing about the identity of a serial killer. Sorkin had just come off the high profile flop of his short-lived television show Studio 60 on the Sunset Strip and this film sees him back on familiar turf with fast-talking cocky characters antagonizing each other. His dialogue his smart and funny as it gets to the heart of the matter – providing Zuckerberg’s motivation and doing a great job chronicling just how Facebook came to be in an engaging way. Fincher and Sorkin have pulled off quite an accomplishment with The Social Network by making an entertaining and engrossing film about the creation of a website. The irony is that Zuckerberg created Facebook as a way for people to acquire friends and connect with each other while he is a deeply antisocial person who doesn’t really care about having friends. Of course, he’s now a billionaire, which I’m sure cushions the blow but the film leaves the lingering impression that he still wants to be with Erica and that this is something that no amount of money will make go away.